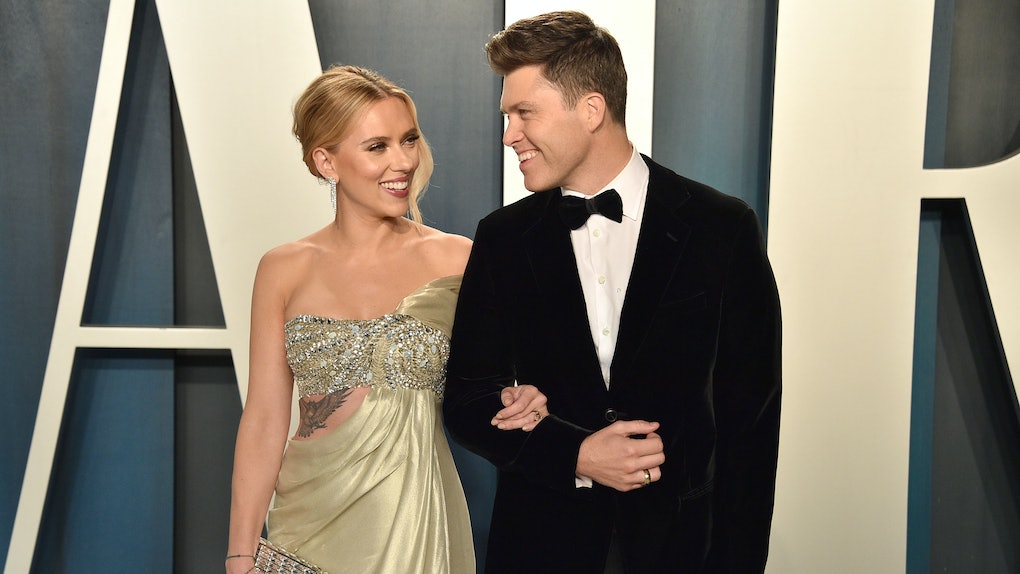 Congratulations to the happy couple! Scarlett Johansson and Colin Jost got married, and their wedding announcement couldn't be more unique. Meals on Wheels America, the nonprofit dedicated to fighting hunger and isolation among senior citizens by providing meals across the country, broke the news on Oct. 29 with an Instagram post featuring the Staten Island Ferry sailing beneath the words "JOST MARRIED." (Ha!)

"We’re thrilled to break the news that Scarlett Johansson and Colin Jost were married over the weekend in an intimate ceremony with their immediate family and love ones, following COVID-19 safety precautions as directed by the CDC," the post read. "Their wedding wish is to help make a difference for vulnerable older adults during this difficult time by supporting @mealsonwheelsamerica. Please consider donating to celebrate the happy couple by clicking the link in our bio."

Johansson and Jost got engaged in May 2019 after two years of dating. Like their wedding announcement, her engagement ring bucks tradition, too; it's an 11-carat, pear-shaped brown diamond on a curved black band. While the talented couple has only been together for three years, they've known each other for much longer than that — although, they have different memories of when they met.

In 2017, Jost told Entertainment Tonight he met Johansson during his first year as a writer on Saturday Night Live, when she guest-hosted the show in January 2006. He described the encounter in more detail in his memoir A Very Punchable Face, in which he called his future wife, "beautiful, smart, sweet and intimidatingly sophisticated."

"She has just turned 20 and I was 23, but in terms of status and maturing she was here [holds hand above head] and I was here [holds hand one inch off ground]," he wrote, per E! News. "She claims that she remembers thinking I was 'cute,' but I know what I looked like and that's not the word I would have used. ('Shaggy' would have been generous. 'Slovenly,' more accurate)."

While Jost was blown away, Johansson told The Hollywood Reporter her first memory of him was from 2010, when she guest-hosted SNL again and filmed a 16 and Pregnant-inspired sketch. "It was some dumb parody that he had written, and he was in there partly directing this segment we had to do," she said.

It wasn't until May 2017, when Johansson returned to SNL to play Ivanka Trump in a sketch that sparks flew. Multiple sources reportedly claimed to Page Six that the actor and writer were making out at the afterparty. By February 2019, the couple was reportedly living together.

Two months after Jost popped the question, he joked about getting married during a standup set in July 2019. “I’m getting married, and it’s such a crazy thing,” he said, per Page Six. “I was so scared of marriage for so long because every time I talked to someone who just got married, or was about to get married, is like, ‘Oh my God, you got to do it … What could go wrong?’ Then you talk to someone who’s been married for five years, and they’re like, ‘Don’t rush into it … You have your whole life ahead of you. Don’t have kids. They’re the worst.’ ”

This is Jost's first marriage. Johansson was previously married to Ryan Reynolds from 2008 to 2011 and Romain Dauriac, the French owner of an ad agency, from 2014 to 2017. She and Dauriac share a 6-year-old daughter, Rose.

With a charitable start to Jost and Johansson's next chapter, it seems the two couldn't be happier.