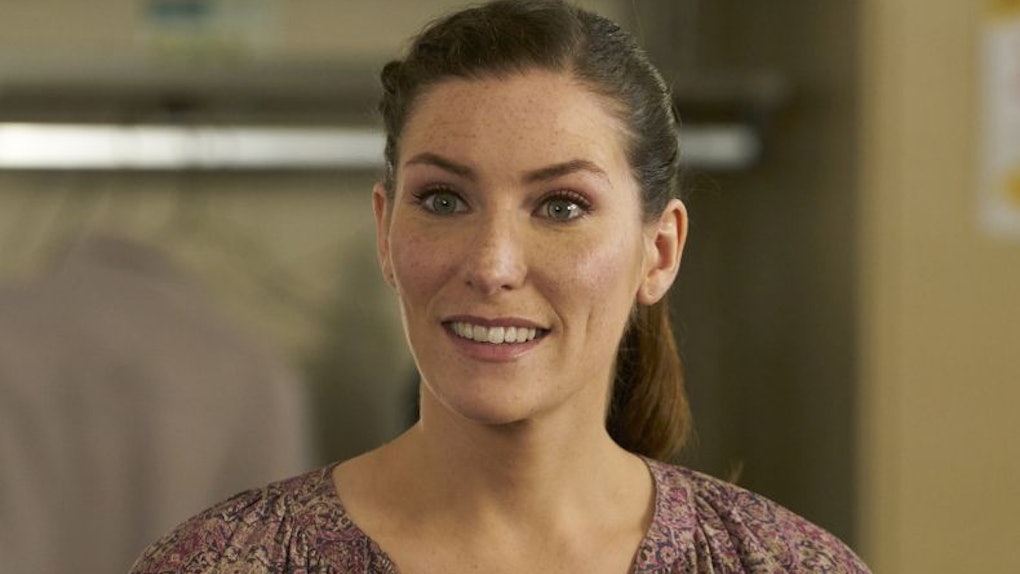 When Schitt's Creek premiered in 2015, it was a modest success. Now, as the comedy gears up for its final season over half a decade later, it's one of TV's biggest comedy hits. There are plenty of reasons why fans are so in love with the heartwarming comedy, and Schitt's Creek star Sarah Levy (who is also the daughter/sister of the show's creators) has her own ideas about why the show has garnered so much praise.

Levy has been a part of Schitt's Creek from the beginning, playing the slightly ditzy (but always well-meaning) Café Tropical waitress Twyla. Although the show first premiered on Pop TV in 2015, she largely credits the show's addition to Netflix in 2017 for its now-wild success.

"With Netflix coming in, everybody’s looking to [marathon] a show, so I think that’s what really tipped the scales," Levy tells Elite Daily at the "Visit Schitt's Creek" Pop-Up Experience in Los Angeles.

For those who have somehow not yet jumped on the bandwagon, the show follows a rich family who ends up in a rural town (the titular Schitt's Creek) after they go broke. The premise sets the show up perfectly for truly laugh-out-loud moments.

But it's also incredibly heartfelt. Levy references the positive portrayal of the romance between Patrick (Noah Reid) and David (Dan Levy) as an especially high point that fans love.

"The introduction of Patrick, I think, was a huge turning point for the show, as well, and bringing that relationship to light," Levy explains. "It’s really wonderful to see those relationships on television and, as Daniel [Levy's brother, who plays David and is the series' showrunner] has said, to make a gay relationship the norm is something that I don’t even think people realize they wanted to see, and it’s really filled that void, in a way."

As the final season of Schitt's Creek approaches, Levy has been reflecting on her time on the show and the unique experience she's had working with her family. Her dad Eugene and brother Dan co-created the series, and they also star in it as Johnny Rose and David Rose, respectively.

"We’ve had such an incredible time together and it’s not lost on me that it’s an experience that I’ll never have again, most likely," Levy says. "I really cherished the time and made sure that I was present for it, because not everyone gets to do that, and to have it be immortalized on television is just a cherry on top."

Levy also felt plenty of sisterly love watching her brother serve as the series' showrunner all these years.

"It was really awesome to see him grow into his role, as a showrunner," she says. "I mean, he has his hand in everything. And he’s such a perfectionist is the best way. To see him spearhead a huge ship was wonderful and it made me very proud to watch."

When Schitt's Creek returns for Season 6, Levy is confident audiences will find it to be the same feel-good show they know and love.

"It celebrates love, it celebrates kindness, and we’re not quite living in that world right now, and I think people are looking for a place to escape and feel good," she says.

The final season of Schitt's Creek begins on Tuesday, Jan. 7, on Pop TV.