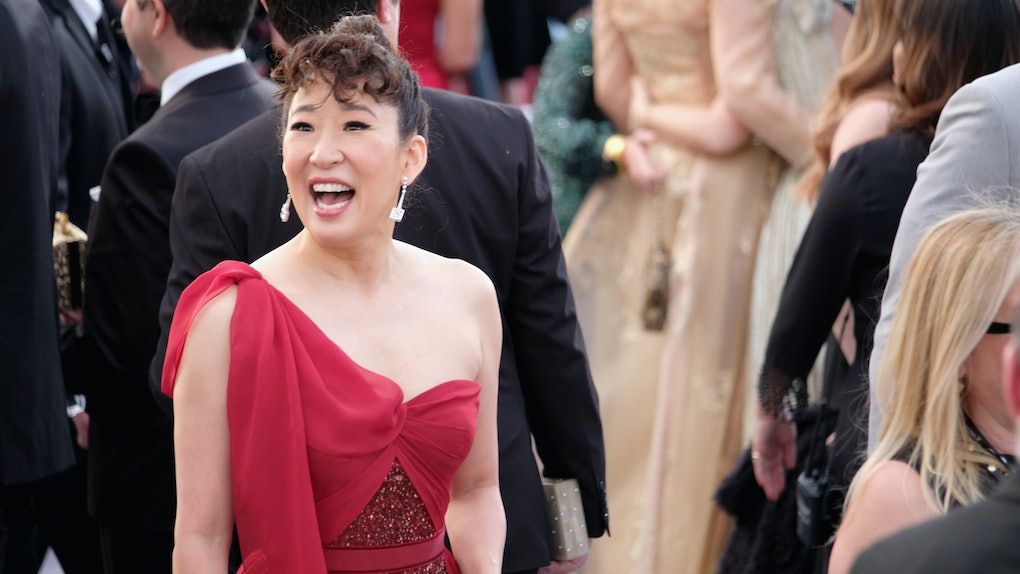 This is Sandra Oh's year, baby. Well, technically every year is her year because she's just the freaking best — but in terms of awards season, it's really her year. Sandra Oh just took home the SAG award for Outstanding Performance by a Female Actor in a Drama Series for her work in Killing Eve and gave a really lovely acceptance speech. Sandra Oh's 2019 SAG Awards speech shoutouts included nods to both Alfre Woodard and Jamie Foxx, and it got a little emotional.

Oh became a major television icon after her career-making role as Cristina Yang in Grey's Anatomy, and her role as Eve in Killing Eve is proving to be just as impactful. Oh was up against plenty of other triumphant actors, like Julia Garner, Laura Linney, Elisabeth Moss, and Robin Wright, but she was the lucky winner for the prestigious award. I'd say she all but ran toward the stage in a stunning ruby dress. With her never-ending charisma and grace, Oh delivered an acceptance speech full of gratitude for other diverse actors who encouraged her to keep going in a historically white-washed industry.

Oh mentioned specific points during her acting career when she came across inspirational POC actors like Alfre Woodard, who told her "your fight is my fight," and Jamie Foxx, who told her to "keep going." "I just so want to thank my fellow actors. I have felt your support over these years," Oh said.

To be honest, touching speeches are kind of Oh's thing. Prior to her SAG win, she also took home the 2019 Golden Globe for Best Actress in a TV Drama Series for her work on Killing Eve, too. While some people (me) might have used that time to shout, dance, and toot their own horn, Oh took the opportunity to graciously thank her parents, who also happened to be her dates that night. "There are two people here tonight that I'm so grateful that they're here with me," she said. "I'd like to thank my mother and my father," she said. She then addressed them in Korean, saying, "Mom and Dad, I love you."

Earlier that evening while she was hosting the Golden Globes, Oh gave her fellow diverse actors the kind of pep talk that Woodard, Foxx, and Waithe gave her.

Congratulations, Sandra! And thank you!