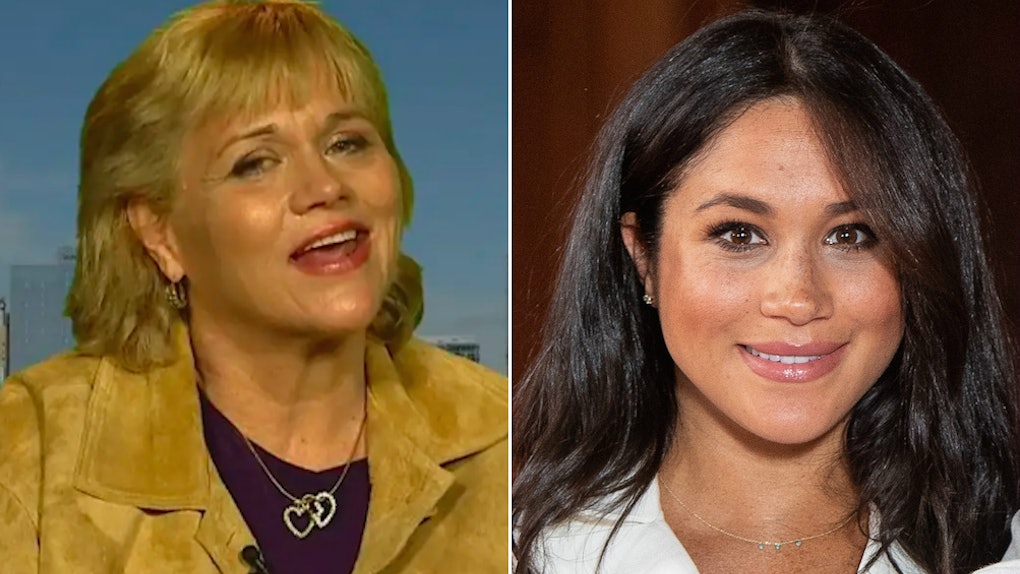 Meghan Markle is a mama! And of course, her American family has something to say about it. Buckingham Palace announced on May 6 that the Duchess of Sussex had given birth to her and Prince Harry's first child — a baby boy named Archie Harrison Mountbatten-Windsor. Most of the internet had a positive reaction to the baby news — it's a baby! — but not Samantha Markle. Her response, while positive overall, is still pressing Meghan to fix a rift she didn't cause. Samantha Markle's reaction to Meghan Markle giving birth really leaves me with only one question: Girl, are you tired yet?

Buckingham Palace announced the birth of baby Archie on May 6. The announcement read, "Her Royal Highness The Duchess of Sussex was safely delivered of a son at 0526hrs this morning. The baby weighs 7lbs 3oz. The Duke of Sussex was present for the birth."

The statement noted that Queen Elizabeth, Prince Philip, and the rest of the royal family had been notified about the birth of the baby. Meghan and Harry debuted Archie in a photocall on Wednesday, May 8, adding that their son was off to meet his royal great-grandmother and great-grandfather right after the photocall. His name had not been announced at the time of the photocall.

Ever-reliable Samantha Markle responded to the birth of Baby Sussex in an interview with DailyMailTV. Yay.

Markle said, "Well I love it! I'm already an aunt and am lucky enough to have Thomas and Tyler as my nephews. I spent a lot of time with them when they were babies and I love them. Family is family."

Then, naturally, she put the onus on Meghan to fix their family problems now that the baby has been born.

"What I think is incredible is that it's a great moment historically and although the adults have a lot of water under the bridge, I would really like to see everyone reach out," she said. "We've extended the olive branch and now it is Meghan's turn."

I don't know, Samantha. I feel like it's not Meghan's responsibility to fix a problem she didn't create and one that you keep exacerbating by constantly speaking to the press about her... just sayin'. Markle has seemingly been milking her sister's royal fame for what feels like forever now, so it should come as no surprise that she's done an interview with an English outlet to talk about the arrival of her nephew.

She did have only positive things to say about the baby, however, which is the only thing I can credit her for through all of this drama. But she did try to take a bit of credit for the baby. No, it doesn't make any sense, especially given that Meghan and Samantha reportedly haven't spoken since 2008, according to Daily Mail.

"We're all welcoming the baby — Markles, Raglands, Sussexes, Windsors. In terms of the gene pool, we've all made a contribution to this wonderful little boy who will probably grow up to be an exceptional man," she said, "and we'd like to treat this as if we're all a big family."

Then she made a wish that probably won't come true, given the circumstances. "It would be nice not to react to what we've heard in the news but to personally meet him and let him judge us for himself," Markle added. "I want him to know he's got a big family and he's part of an amazing historical time and we're all excited for him."

We're excited for Meg and Harry - I am really excited for her. I love her, she's my baby sister and it doesn't matter what we've all said back and forth but she's got to do the right thing. I just want to say Meg, you've got a world here and a family here [in the US] that's excited for you.

She, of course, brought up their father, Thomas Markle, and made a plea to Meghan that she lets him be part of little Archie's life.

"I would really love [Thomas Markle] to be a part of the baby's life. But more than that, Meg is his baby too," she said. "I want Meg to be part of his life, I want Meg to be able to share this beautiful time with him in whatever way she can. I think it's important for her too."

*Heavy sigh.* I don't think we'll ever hear the last of Samantha Markle.