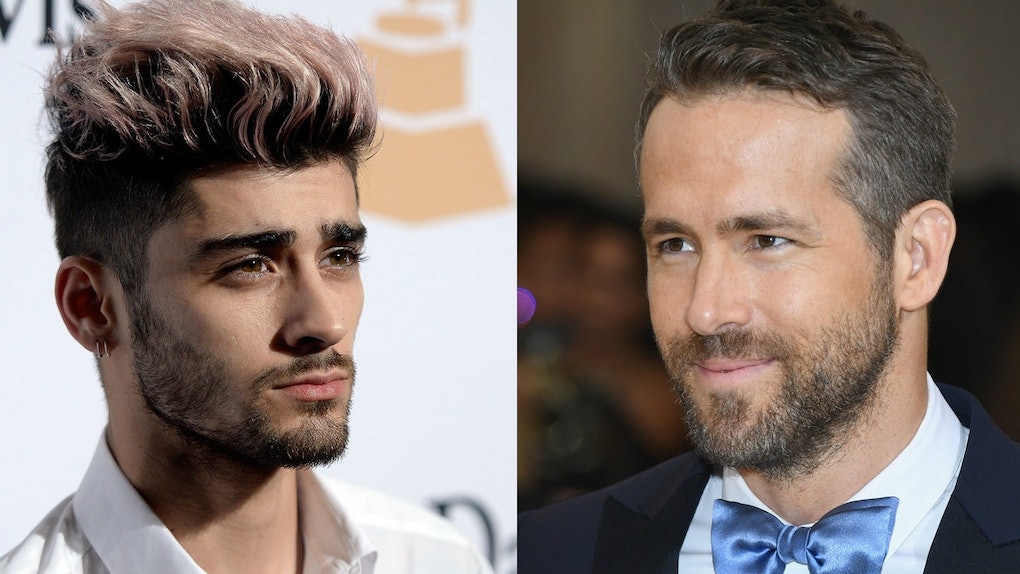 This might be a hot take, so just prepare yourselves: Even though there are a plethora of hot guys named "Ryan" in Hollywood, my favorite one, by far, has to be Ryan Reynolds (sorry Gosling, you're great, too). Not only is Reynolds incredibly sexy, and married to one of the most perfect people on the planet, (we're lookin' at you, Blake), but he's also the king of hilariously trolling his friends and family on a regular basis. In terms of of his latest goofy endeavors, Ryan Reynolds filmed a birthday message for Zayn Malik, and it was actually hysterical.

Malik's 25th birthday was on Jan. 12, and there was no doubt in our minds that the English singer-songwriter would receive a legendary birthday shoutout from Reynolds. Instead of sending Malik any old "Happy Birthday" text, The Deadpool actor made his talented pal the birthday video we've been wishing for our entire lives. And since the video was literally too amazing for words, Malik didn't even bother giving it a caption on the 'gram.

Dressed as his signature superhero character, Deadpool, Reynolds appropriately introduces himself as Wade, his name in the film. And, somehow straight-faced, he says,

Zayn, it’s Wade, don’t hang up. I just wanted to wish you a very happy birthday, again. I also wanted to apologize for jumping out of the cake like that, I didn’t realize it was the middle of the night – I had no idea it was in the middle of your bedroom. I want to thank your security who were very, very gentle and creative with the taser. So, anyway, happy birthday to you and Mr. Tim Horton. You share your birthday with a very special Canadian, who is very dear to my heart.

I had to look up the significance of the shoutout to Tim Horton, but Horton was a Canadian ice hockey player who died in a car crash in 1974. Coffee drinkers might recognize him as the co-founder of popular Canadian coffee and doughnut chain, Tim Hortons. The shoutout to Horton seemed a little random, but as Reynolds is always chock full of that good old Canadian pride, how could he resist?

So like, even though the pic-stitches we get from our friends every year are pretty awesome, this is definitely the birthday wish we're all hoping for this year. And this isn't even Reynolds' goofiest pranks. In Blake Lively's latest film, Rhythm Sections, she's made up to look like she just survived a plane crash (aka, not like her usual self), and upon snagging a snapshot of her new look from the set of the movie, Reynolds posted it to Instagram, sarcastically and hilariously captioning it, "#nofilter." And, on the former Gossip Girl star's birthday, Reynolds posted a photo of them together on Twitter with only half of her face in the photo. He simply captioned the pic: "happy birthday to my beautiful wife."

Ryan, you seriously slay the birthday game, and you're too freaking funny.

We are beyond obsessed with the fact that Malik and Reynolds are so close — and Reynolds' birthday message to the pop star definitely didn't disappoint. Deadpool is everyone's fave super hero, and with his signature scathingly hysterical sense of humor, there's never a dull moment. We also appreciate the fact he doesn't hold back from trolling his wife, either, because their banter on social media quite literally defines #couplegoals. My one and only birthday wish this year is to receive a birthday message from Reynolds — and even though my wish might be a tad unrealistic, I'm still hoping for the best.