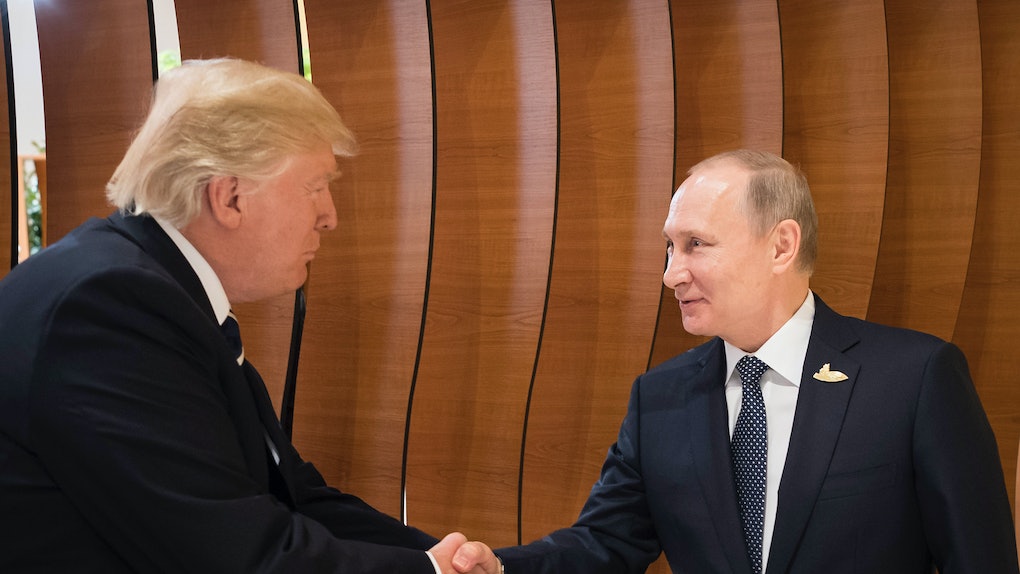 Despite President Donald Trump's willingness to believe that Russia did not interfere in the 2016 presidential election, according to the national intelligence community, interference is writ large. And so, the many investigations into the extent and means of election interference continues. The latest development? Suspicious Russian "election campaign" payments the FBI was tipped off about two months ago.

According to a Buzzfeed News report published on Nov. 14, Citibank alerted the FBI to more than 60 suspicious wire transfers that passed through the bank from the Russian Foreign Ministry to various Russian embassies during August and September 2016, totaling $380,000. Many of these transfers included a memo, "to finance election campaign of 2016" or memos referring to 2016 elections. At least one of those payments was made to the Russian embassy in Washington for $30,000.

The bank launched a review after it discovered the $30,000 wire transfer to the Washington embassy, which led to the discovery of dozens more of these suspicious "election campaign" transfers.

The suspicious transactions are not alone. In response to a congressional request, Citibank reportedly turned over financial documentation connected to more than 650 suspicious transactions totaling about $2.9 million, sent to four Russian accounts in the U.S. over a period from Nov. 2013 to March 2017. Most of the transfers were not election-related, according to the report, but are being investigated for "possible ties to Russian corruption and money laundering."

The "election campaign" payments were reportedly made to Russian embassies in almost 60 countries between Aug. 3 and Sept. 20, 2016. There were seven federal elections in various countries across the world in 2016, including in a chamber of Russian parliament, for which diplomatic compounds and embassies opened polling stations for expats. It is still not clear what exactly the money transferred was used for, or to which election the memos were referring. An unnamed source at the FBI told Buzzfeed,

How could we not investigate a suspicious financial transaction that contained a memo that said, 'finance election campaign 2016?' Given the climate and what was in that memo line it would be very irresponsible for us not to investigate. It’s a good lead.

The climate to which this source is referring is the U.S. intelligence community's "high confidence" in evidence of Russian interference in the 2016 U.S. presidential election.

The Office of the Director of National Intelligence (ODNI) analysis, which was released in Jan. 2017, stated, in short,

We assess Russian President Vladimir Putin ordered an influence campaign in 2016 aimed at the US presidential election. Russia’s goals were to undermine public faith in the US democratic process,denigrate Secretary Clinton, and harm her electability and potential presidency. We further assess Putin and the Russian Government developed a clear preference for President-elect Trump.

In other words: there is agreement among U.S. intelligence that Russia interfered in the U.S. presidential election — both on behalf of their preferred candidate Donald Trump, and in order to sow discord among American citizens. Now, the question is the extent to which Russia's multi-tiered interference went.

The intelligence community's findings have led to a larger probe into the Russian interference, which reaches across U.S. intelligence agencies, several congressional committees, and a special investigation into whether or not the Trump campaign colluded with Russia. Thanks to these investigations, the American public has learned of an extensive disinformation campaign run by Kremlin-backed troll farms and the ways in which Russia used social media to manipulate American voters — including fake ads posted on platforms like Facebook.

So, despite President Trump's insistence as recently as this week that Putin has personally assured him that there was no interference, the U.S. intelligence community disagrees. And these payments very well may help the FBI understand the meddling campaign better. We'll just have to wait and see where it goes.