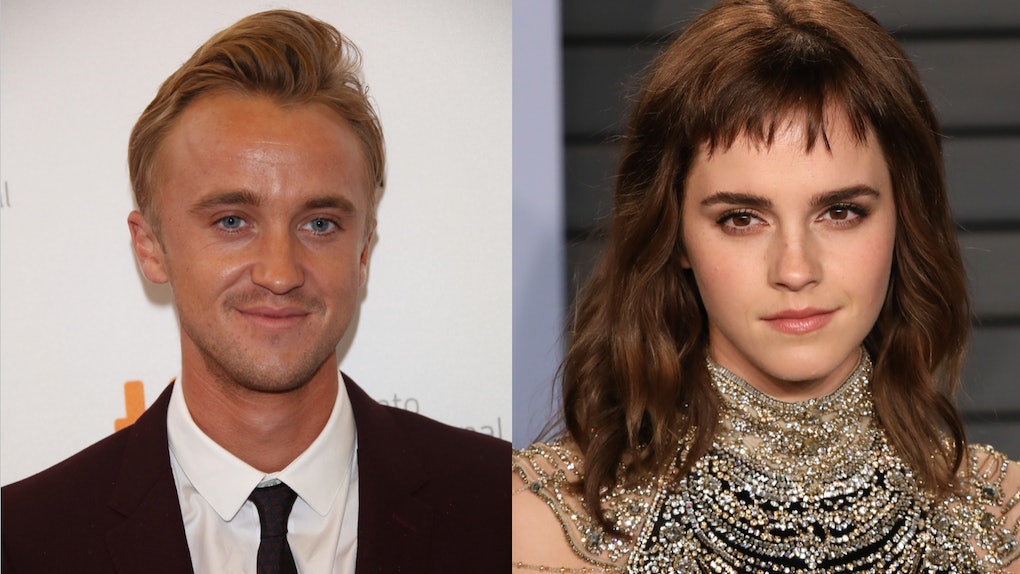 If you shipped Dramione back in the day, Rupert Grint's quote about Emma Watson and Tom Felton's "romance" is about to make all of your childhood dreams come true. In an interview with Entertainment Tonight on Nov. 18, Grint opened up about the off-screen chemistry shared by his two Harry Potter co-stars. While he made it clear that he wasn't trying to cause any drama or spread any rumors about them, Grint did admit that Watson and Felton had a little somethin' going on between them when they were young. “There was always something. There was a little bit of a spark,” Grint shared. “But we were kids. It was like any kind of playground romance."

Grint's claims about Watson and Felton don't come completely out of nowhere. Watson, herself, has admitted to having had a childhood crush on Felton. “Between the ages of 10 and 12 I had a really terrible crush on Tom Felton. We love a bad guy, and he was a few years older and he had a skateboard and that just did it really,” Watson said in a 2012 interview with The Jonathan Ross Show. “He used to do tricks on it. He was so cool. He totally knew [I had a crush]. And the thing is, he’d turn and go, ‘Oh, I see her in a younger sisterly way.’ And it just broke my heart, still does.”

Even now in their adult years, Watson and Felton continue to fuel dating rumors by posting couple-y pictures on Instagram, such as this one Felton posted on Aug. 19:

There was also this mad cute one Watson posted last year to tell her fans to go watch Felton's then new show Origin:

So, yeah, you can see why people would still be down for them to be a couple. Unfortunately, it does appear as though the two really are just friends.

In fact, the only person Watson is deeply involved with at the moment is herself. In a November interview with British Vogue, the actress made waves by explaining that she prefers to refer to herself as "self-partnered."

“I never believed the whole ‘I’m happy single’ spiel,” Watson explained. “I was like, ‘This is totally spiel.’ It took me a long time, but I’m very happy [being single]. I call it being self-partnered.”

Whatever their relationship status is, the good news is the two definitely still seem to be friends. At least that's something, right?