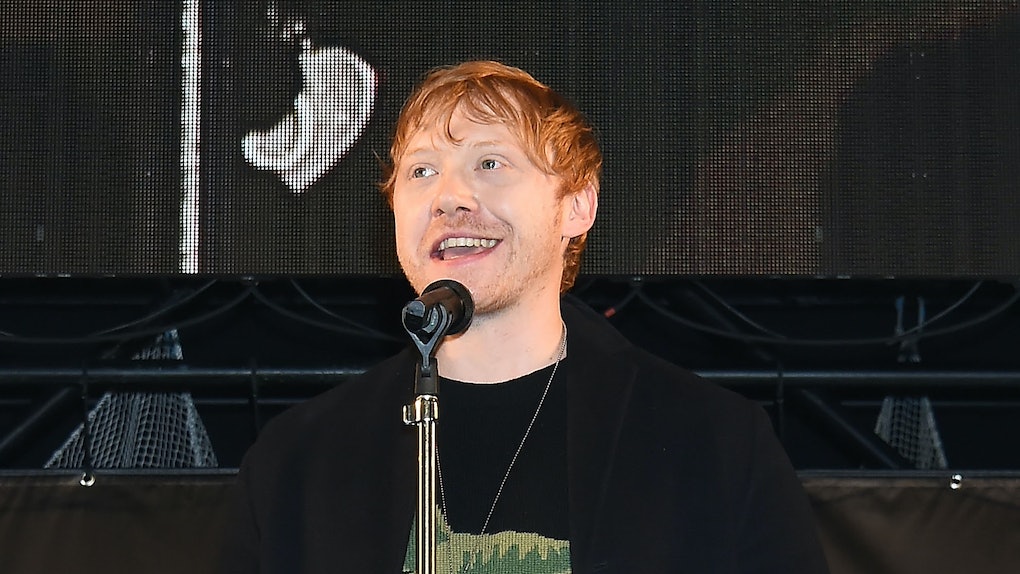 Calling all Potterheads — your favorite red-head wizard has finally gotten on the 'gram, and his first post is causing a frenzy. Ruper Grint joined Instagram on Nov. 10, and so far he's all smiles on the platform. Donning what appears to be a Philadelphia 76ers cap, Grint smoldered for a selfie while cuddling his baby girl on a fuzzy piece of yellow furniture. Needless to say, fans of Grint and his iconic performance as Ronald Weasley in the Harry Potter movie franchise — as well as some of his fellow former cast members — immediately flocked to his Instagram to give him a warm welcome.

"Hey Instagram....only 10 years late, but here I am," Grint began the caption of his debut selfie. Immediately, fans noticed the bald back of his firstborn's head below his and flipped out. The photo is not only the first look at the baby girl, who he and his longtime girlfriend Georgia Groome welcomed into the world this past May, but also the first time he's decided to reveal their child's name: Wednesday. The unique name choice is reminding some of Wednesday Addams, the fictional daughter of Morticia and Gomez in The Addams Family.

Grint signed off simply by writing, "Stay safe, Rupert," leaving no indication as to when he'll decide to pop up next on the photo-sharing platform, but he did follow around 80 people while logged in. Among the famous faces followed were some stars from RuPaul's Drag Race, like Jinkx Monsoon, Sharon Needles, and even RuPaul herself. And yes, for all those dying to know — he did follow Hermione Granger.