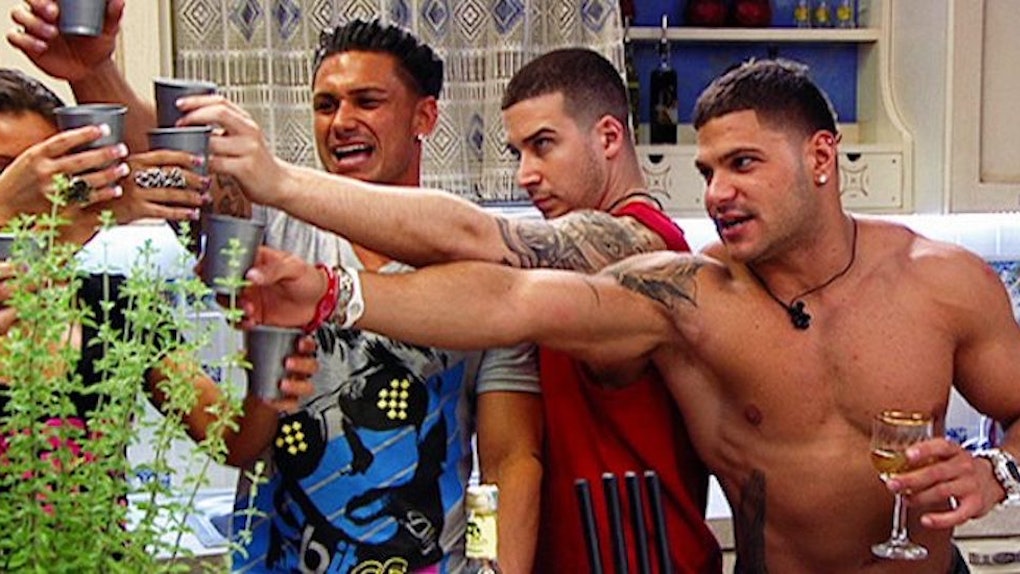 On Thursday night's new episode of Jersey Shore Family Vacation, Ronnie treated the entire house to a batch of his famous Ron Ron Juice... and of course, that led to some very questionable decisions when they all went to the club afterwards. But for right now, let's just focus on the drink, because Ronnie actually spells out how to make the legendary beverage while caressing a watermelon in the confessional room and slurring his words just a bit:

Look at this watermelon, this succulent, voluptuous, smooth watermelon. Blended with vodka and cranberry and ice, and swallowed by everybody in the house.

Obviously, that watermelon is one of the main ingredients, and of course, the other one is a ton of vodka — we see Ronnie dumping most of a bottle of vodka into the blender in the kitchen. Other than that, all you really need is some cranberry juice and ice, blend it all together, and you're ready to get turnt. It's basically like a giant, alcoholic watermelon smoothie, and it honestly sounds very good.

Although the version of Ron Ron Juice that Ronnie detailed in the latest episode of Jersey Shore Family Vacation really only consists of four ingredients, there are some more variants online that add a few extra touches to the iconic drink. Most sites that feature a Ron Ron Juice recipe include cherries as a fifth ingredient alongside the watermelon, vodka, cranberry juice, and ice, and blueberries also make an appearance every so often. For instance, the cocktail site VodkaOnly suggests adding cherries and creamer to the mix for an even fruitier kick, and offers an updated Snooki version that includes blueberries and jäger for anyone who is really looking to turn up.

Before Jersey Shore Family Vacation premiered, JWoww made a batch of Ron Ron Juice on her YouTube channel, walking viewers through the recipe that she uses. JWoww made use of all the fruits she could, including the requisite watermelon, as well as cherries and blueberries. The biggest difference in her recipe was that instead of using a blender, JWoww smashed and mixed all the fruit in with the vodka and cranberry juice by hand. The result is not a smoothie like we see on the show, but rather a traditional looking cocktail with pieces of fruit still floating around in there:

The true beauty of Ron Ron juice is how loose the recipe is. You can basically throw however much watermelon or vodka, or whatever other fruit or alcohol you are craving into the blender and just go to town. If you are looking for more rigid guidelines, though, WikiHow suggests using 8 cups of watermelon, 12 ounces of cranberry juice, 1.5 cups of blueberries, a jar of maraschino cherries, 1.5 cups of vodka, and then however much ice you think is necessary.

Ron Ron Juice is definitely the perfect thing to drink with your friends if you keep holy the Jerzday and have Jersey Shore Family Vacation viewing parties on Thursdays, or really just anytime you want to get crazy but are sick of the same basic mixed drinks. Plus, it is super easy to make and you can really customize the recipe however you like. Happy fist pumping!