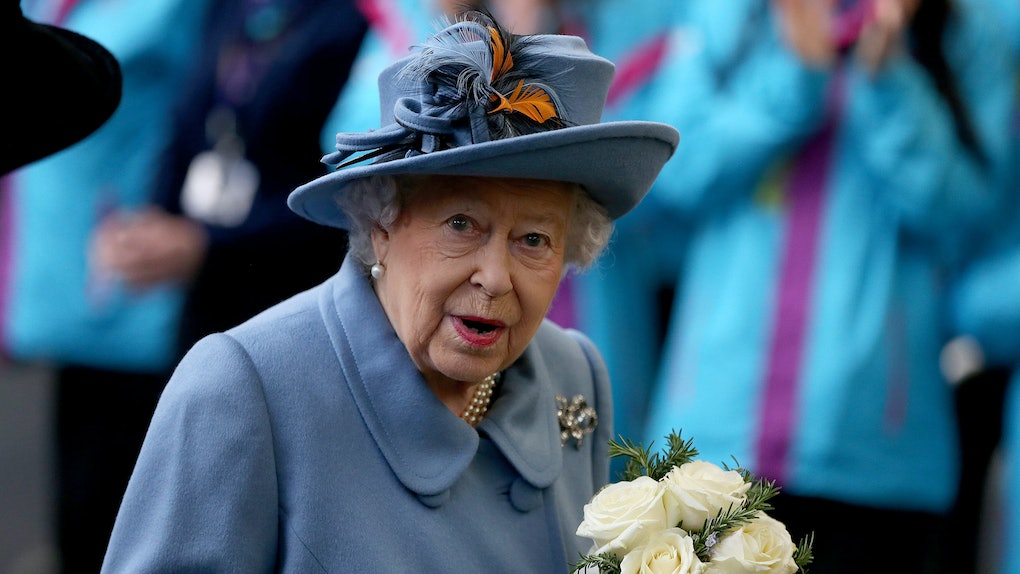 Happy Royal Wedding Announcement Day! On Monday, Nov. 27, news broke that Prince Harry officially popped the question to American actress Meghan Markle, and everyone is so excited for them — even the Queen. Queen Elizabeth's reaction to Prince Harry and Meghan Markle's engagement is awesome, you guys. (But it would, because she's awesome.)

In a statement delivered by a Buckingham Palace spokesman, the Queen and Prince Philip stated they "are delighted for the couple and wish them every happiness.”

THANKS, QUEEN! Isn't she the best?

Apparently, the two lovebirds are set to be wed in 2018 and the public is dying for more details. As part of the announcement, The Clarence House released an official statement saying,

To make everything even more magical, to create the engagement ring, Harry is rumored to have used diamonds from a brooch that once belonged to his mother, Princess Diana. According to US Weekly, he custom designed the amazing bauble for Markle after his brother Prince William used their mother's real ring to propose to Kate Middleton.

Still, it looks like no hard feelings from Markle.

Markle and Harry met through mutual friends in July of 2016, and made things official by the following November. In retrospect, we should have seen an engagement in the near future.

Markle, who just finished shooting her USA network series Suits, recently spoke with Vanity Fair about how in love she and Harry are. In the interview, she said,

Be still my heart.

She also said she does her very best to stay away from the media and to keep any negativity out of her personal life.

We’re two people who are really happy and in love. We were very quietly dating for about six months before it became news, and I was working during that whole time, and the only thing that changed was people’s perception. Nothing about me changed. I’m still the same person that I am, and I’ve never defined myself by my relationship.

I don’t read any press. I haven’t even read press for Suits. The people who are close to me anchor me in knowing who I am. The rest is noise.

Well, that's one way to go about it.

Something tells me her life is about to take a more dramatic and public turn, but like she said, she has Harry (and a whole nation) there to support her.

We couldn't be more excited for another royal wedding, and wish Harry and Meghan so much luck and happiness this upcoming year!