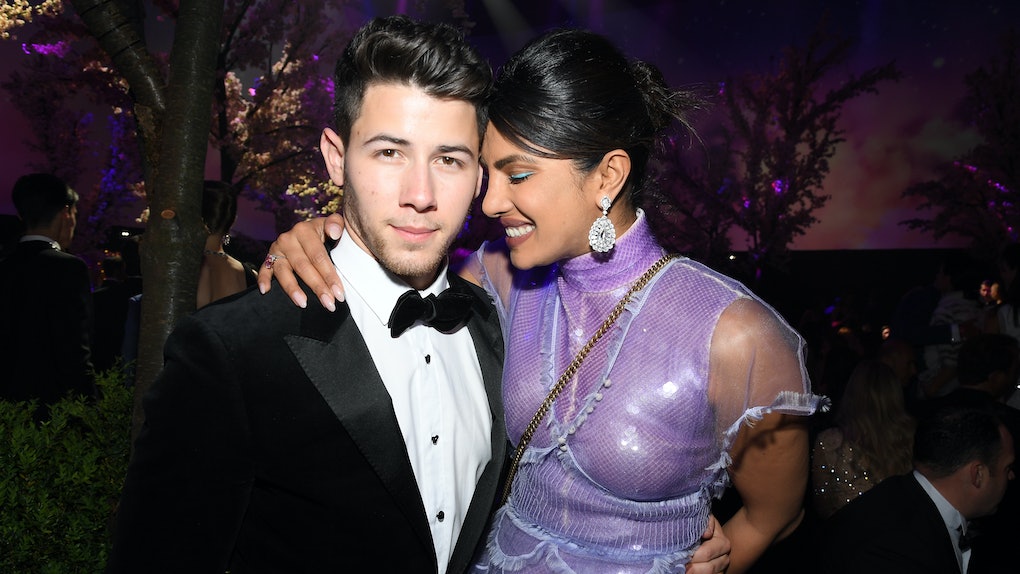 If you don't believe in love at first sight, then clearly you haven't been following the love story of newlyweds Priyanka Chopra and Nick Jonas. I don't blame Jonas for falling as quickly as he did for Chopra — after all, the former Bollywood star and Miss World 2000 could make a sucker out of anyone. But his crazy passion is definitely reciprocated, because Chopra is just as smitten with the youngest member of the Jonas Brothers as he is with her. Don't believe me? Then I think that Priyanka Chopra's quotes about Nick Jonas might just change your mind.

I'll admit that I still get jealous (imagine I sang that bit just like Jonas) when I remember that Jonas and Chopra's relationship means I'll never have the opportunity to be the third Jonas sister. (Don't think you're off the hook either, Sophie Turner). However, my pain is eased a bit anytime I see a photo of Chopra and Jonas together. The way Chopra looks at her husband seriously makes me weak in the knees. An Instagram picture may be worth a thousand words, but you'll wish you could also "like" all of the sweet things Chopra has said about her main squeeze.

1. She Can't Help But Get Flustered When Talking About Her Man

In an interview with Vogue back in December 2018, Chopra confessed that she had never publicly spoken about a relationship before she became involved with Jonas, having made that rule for herself long ago. But that all changed when she met Jonas, and even talking about him makes her girlishly embarrassed. "This guy turned me into such a girl!" she said. "If I could blush, I’d be tomato red right now.”

2. Despite Her Initial Doubts, He Quickly Won Her Over

While speaking at Tina Brown’s 10th Annual Women in the World Summit, Chopra revealed that when she and Jonas first met, she didn't think that she could date someone so young, seeing how he is 10 years her junior. It was only after they started dating that Jonas was able to change her mind. “I call him ‘Old Man Jonas,'" she said. “... He’s such an old soul, extremely smart, so good for me because he grounds me so much."

3. His Respect For Her Culture And Values Means The World To Her

After posting a series of pictures on Instagram displaying their gorgeous Mehendi celebration, Chopra captioned the pic with an explanation of how important the Mehendi can be for an Indian woman during a wedding and how much it meant that Jonas understood this. "One of the most special things that our relationship has given us is a merging of families who love and respect each other's faiths and cultures," she said. "And so planning our wedding with an amalgamation of both was so so amazing."

4. He Somehow Always Knows How To Make Her Happy

In an interview with Hello! Magazine about her three-day fairytale wedding — which took place in December 2018 — Chopra explained how Jonas did everything he could to make the big day all that she wanted it to be. "When Nick said to me that he wanted to marry his bride in her home, it melted my heart," she divulged. "Being able to have two big weddings in India with our closest family and friends was unbelievably special."

5. She Considers Him Part Of Her Identity Now

During her February 2019 appearance on The Tonight Show Starring Jimmy Fallon, Chopra discussed the reason why she chose to add "Jonas" to her name. "I always wanted to add his name to mine because I felt like, you know, we're becoming family and I'm a little traditional and old school like that," she said. "But I don't take away my identity — he gets added to who I am."

6. She's Never Felt So Comfortable With Another Person

While chatting with People during the Bumble India launch in October 2018, Chopra revealed that, before Jonas, she had never felt as though she could be completely herself in the company of another person. "This is the first time I was comfortable with being with someone who is such an incredible partner," she gushed, "so it just felt natural."

7. Their Relationship Is Founded On Mutual Respect

At that same event, Chopra explained to People why her relationship with Jonas worked so well. For her, what has made the two of them so successful is their mutual respect for each other. "Then everything is so easy because you give each other credit for your intelligence, you give each other the benefit of the doubt because you trust each other," she said." There’s so much that comes out of that."

8. She Couldn't Feel More Confident About Their Future Together

In an Instagram post from right after their wedding in which she and Jonas are pictured walking down the aisle together, Chopra stuck to the less-is-more policy and kept her caption simple. "And forever starts now..." she said.

Be still my heart! Mr. and Mrs. Jonas, I stan you forever.