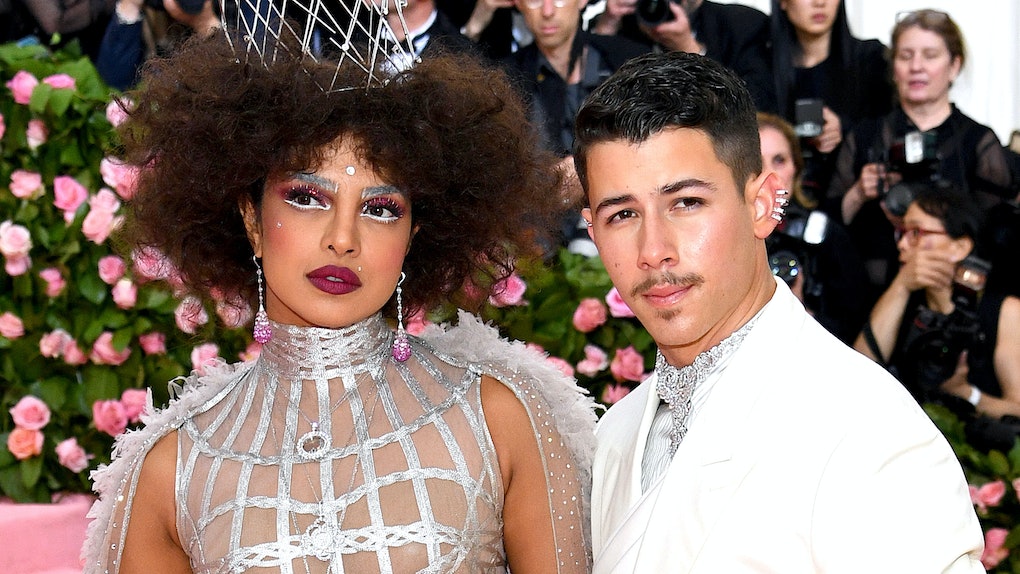 Priyanka Chopra and Nick Jonas slayed the Met Gala red (read: pink) carpet, and now, they're slaying fans on Instagram with their flirty-as-hell comments. The newlyweds are very much still swooning over each other every chance they get, and they're not shy about conducting said swooning in public spaces. Case in point: Priyanka Chopra's NSFW comment on a Met Gala photo with Nick Jonas.

Nick Jonas' caption on this photo we're about to check out was equally NSFW, by the way. The youngest of the Jonas Brothers trio posted a black-and-white photo of him and Chopra all camped out for the Met Gala, and the caption on the photo... oh my. (First of all, respect to Jonas for being one of the only straight men at the Gala to actually be dressed for the theme. Ugh.) The photo shows Chopra and Jonas all camped out in their Met Gala garb, with Chopra looking like an Alice In Wonderland queen and Jonas looking like Little Finger from Game of Thrones.

Here's where things get NSFW: In the photo, Chopra and Jonas are facing each other and both looking down. In truth, they're probably just looking at Jonas' shoes, but Jonas' caption on the post said what we were all thinking when looking at this photo.

"Caption this. 😏," Jonas said. NICHOLAS. We all know what you meant by that side eye emoji. Don't make me say it.

A bunch of people tried their hand at their own captions before Chopra chimed in with this: "That's mine?!!!"

This comment is... admittedly not as sexual as the implications in Jonas' caption. I honestly feel like Chopra meant this to be like she was checking her husband out and damn does he look good. But honestly, both of their captions can be taken hella sexually.

And let me tell you... the comments on this Instagram with caption ideas are much more NSFW than anything Jonas and Chopra said!

"That ain’t no little finger," one person commented. Oh my god.

"Camp Rock: Rated R," another said. *Gasps in the key of Disney Channel*.

"When he takes off the purity ring on the first date," another commenter said. *Spits water*. Annddddd we have a winner, folks!

Jonas and Chopra are clearly super obsessed with each other. I mean, they should be, given that they just got married and looked hella fine at the Met Gala.

I mean, just look at these two.

Let's get a full-body shot up in here for the folks in the back.

I'd also like to take this time to point out the fact that Chopra and Jonas are wearing matching shoes as part of this look.

First of all, big fan of the glittery shoes. Big fan.

Now, where do you have to look in order to see your feet? Down! That's right. And where are Chopra and Jonas looking in Jonas' Instagram? Down. Right again!

That's probably what they're looking at in Jonas' Instagram, ya nasties. The defense rests.