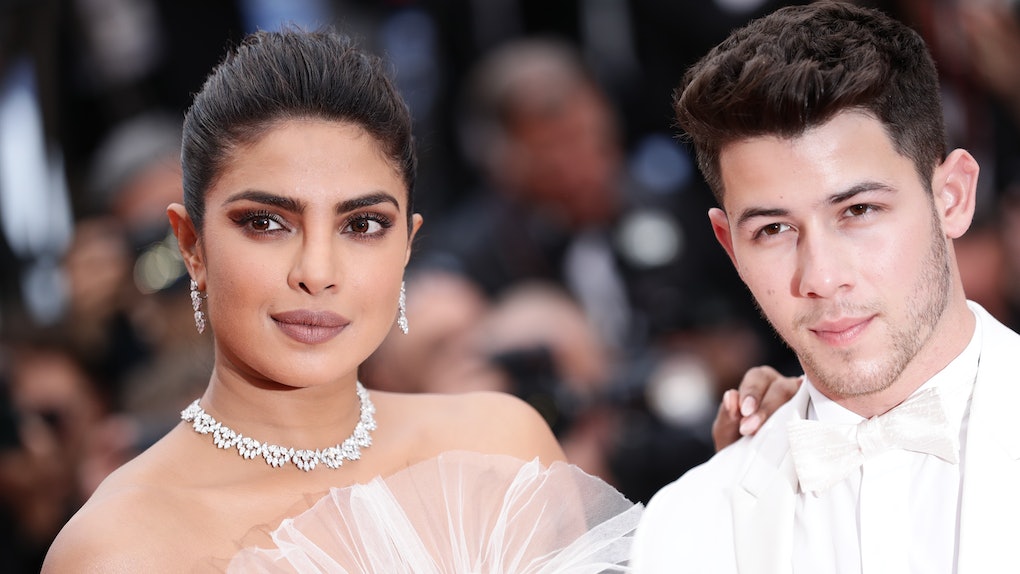 You know them. You love them. They're Priyanka Chopra and Nick Jonas and they're married, OK? The two celebrities revealed they were dating in late spring/early summer 2018 and were engaged shortly after. By December, they officially tied the knot in an extravagant multi-part wedding in India and fans hearts exploded. Still, there is one detail that's been poking at haters and trolls, which is, of course, why we can't have nice things. Chopra is 10 years older than Jonas. (But seriously, who cares?) Priyanka Chopra's comments about her and Nick Jonas' age difference points out a societal double standard that is so important to hear.

Chopra, 36, and Jonas, 26, are as happy as any two lovebirds you've ever seen. They have no qualms, concerns, hang-ups, or issues with their age difference. Still, the media loves to point out that Chopra, the female in the relationship, happens to be the older one. To this point, Chopra spoke with InStyle about how no one would likely care if it were the other way around. "People gave us a lot of sh*t about that and still do," she said. "I find it really amazing when you flip it and the guy is older, no one cares and actually people like it."

Gross standards and stale traditions have always held space for hetero couples that are made up of an older male and a younger female. For boring and stupid reasons, people get tripped up trying to wrap their minds around the opposite. Of course, if you've seen Chopra and Jonas interact, like, at all, you wouldn't notice their age difference even a little bit. It's a moot point. Get over it, folks.

Alas, Chopra has faced backlash from the press and was once even called a global scam artist, according to InStyle. That kind of name-calling and accusation did not sit right with her growing family. "Nick, Joe, Sophie, my mom, his parents, everyone was there furiously typing on their phones. They were so mad," she said. Reportedly, the article making the claims was eventually taken down and the publication issued Chopra and apology.

Still, back up, folks.

Chopra says her approach to handling the haters is to push past the BS and do her best to not assign any value to their words. She explained, "Commenting on some stupidity means it eventually becomes important because I gave it importance," adding, "A lot of people don’t understand that way of thinking. It’s not a myopic thought ... it’s a long-term plan."

*Furiously takes notes on how to be the bigger person.*

For Chopra, it's simple. Life is meant to be enjoyed, and she's clearly doing just that with her new husband. In fact, the article opens with this one poignant thought from the stunning star: "Obviously, the purpose in life is to be happy. Nobody put you on this earth to feel like shit. I think the point of existence is to make the journey the best that you can. Create your own circumstances."

Thanks for the hot take, Priyanka. On the record, I adore you and Nick together.

More like this
Is Taylor Swift's "Mr. Perfectly Fine" About Joe Jonas? Sophie Turner's Instagram Has Fans Curious
By Brandy Robidoux
These Tweets About Taylor Swift's "Mr. Perfectly Fine" All Ask 1 Important Question
By Sydney N. Sweeney
Cara Delevingne's Old Photo Of Her Grandmother With Prince Philip Proves It's A Small World
By Brandy Robidoux
Stay up to date