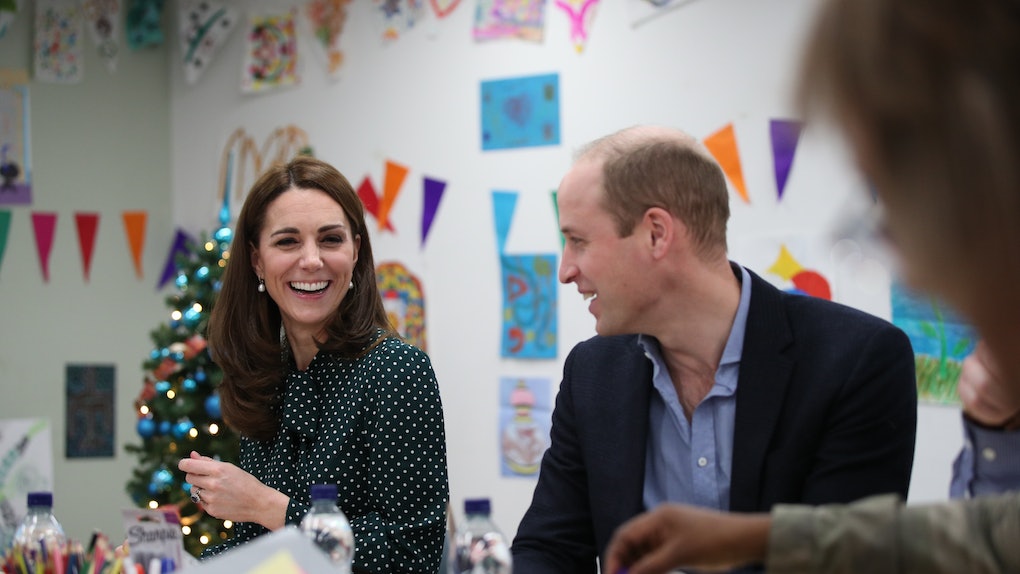 The Duke and Duchess of Cambridge just released a new photo of their family, and it just might be their cutest one yet. Kensington Palace shared Prince William and Kate Middleton's Christmas card photo, and I can't get over how much Prince Louis looks like his big brother, Prince George. You have to see this.

The photo was released on Friday, Dec. 14. Kensington Palace wrote, "The Duke and Duchess of Cambridge are pleased to share a new photograph of their family. The photograph, taken by Matt Porteous, shows The Duke and Duchess with their three children at Anmer Hall. This photograph features on Their Royal Highnesses’ Christmas card this year."

The photo features the entire family outside in nature, sitting along a tree. Everyone looks super casual — Kate dressed in a beige sweater while William sports a plaid button-down, and they're both in jeans. The three kids are also wearing the most adorable sweaters.

But truly, in my eyes, the star of this photograph is Prince Louis. Can you EVEN with that smile? This is one of only a few glimpses we've gotten of Louis so far since he was born back in April 2018, and I think with every photo, he looks more and more like a baby Prince George.

The last time we got to see Prince Louis was in photos that were released back in July 2018. In one of the photos, mom Kate is holding Louis outside in the garden at Clarence House following his christening. He has such a big smile, and even at 3 months old, fans could already see the resemblance to George.

As a comparison, here's a teeny, tiny Prince George with mom Kate back in April 2014, when he was about nine months old.

This year's Christmas card photo from the Cambridge fam differs a ton from last year's. In their Christmas 2017 photo, the family was much less casual, taking their photo on a set at Kensington Palace. Prince William wore a navy suit and a blue tie, and Kate looked stunning in a powder blue ensemble. Both Prince George and Princess Charlotte were also in shades of blue. And, of course, Prince Louis didn't exist yet! The palace announced on Sept. 4, 2017, that Kate was expecting her third child, so depending on when the 2017 photo was taken, she was either in her first trimester or not even pregnant yet.

Despite that, Kate was so early on in her pregnancy, fans around the world were quick to speculate that Kate was having a baby boy. And, as we all know now, they were right.

Last but certainly not least, we also got a new Christmas card photo from the Duke and Duchess of Sussex, Prince Harry and Meghan Markle. The photo was taken during their wedding reception at Frogmore House back in May, and I can't get over how romantic it is.

The fireworks? The black and white filter? Gorgeous. Someone adopt me into the royal family, please!