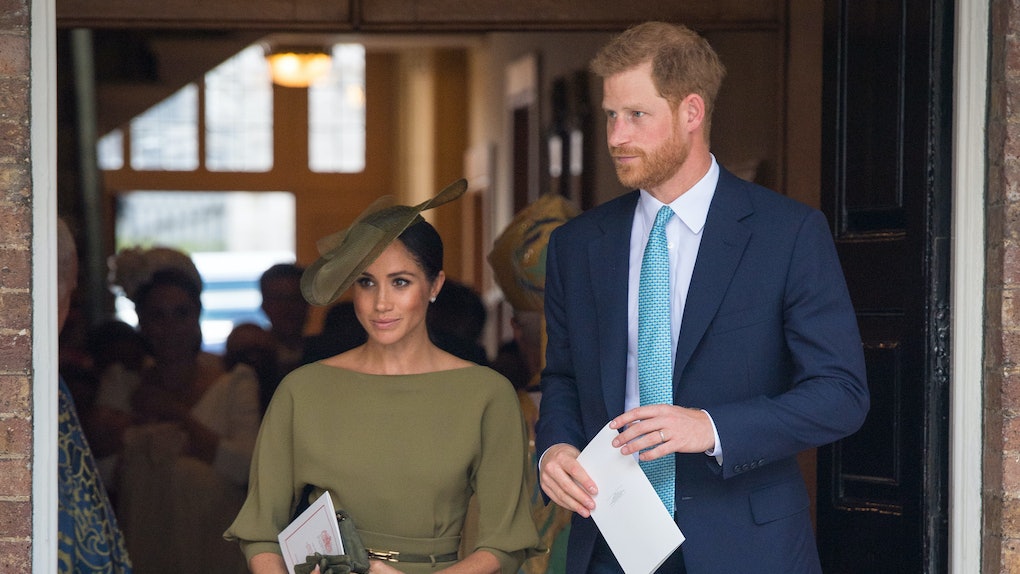 When you think of marriage, what are the first things that come to mind? Obviously there's the wedding. There's the proposal. And then, of course, there's the rings. The little circular bands we put on our ring fingers that symbolize the everlasting love shared by two spouses. Oh, and we can't forget they also tell strangers to BACK OFF our spouses. So, that's nice too. Royals don't often wear wedding bands, which is why Prince Harry's wedding band is actually pretty ginormous testament to his love for Meghan.

Let me give you a little back story here. The men in Prince Harry's family historically have opted out of the whole wedding ring thing. For example, his brother, Prince William, and his dad, Prince Charles, both choose to leave their ring fingers bare. Yes, they both clearly love their wives but they just don't feel the need to wear rings to display that love to the world. Don't believe me? Fine. Don't take my word for it! Just look at these pictures of the two older royals making public appearances sans wedding bands.

You see Prince William's left hand there? NO RING.

That's all well and good for them, but Prince Harry — always the rebel of the family — has decided to break tradition and wear a wedding band on his ring finger following his nuptials.

Before Prince Harry and Markle even tied the knot, Metro reported that Prince Harry had made the decision to break tradition and wear a band to honor his marriage. According to Metro's reports, not wearing a ring wasn't even really much of a "tradition" at all. In fact, they reported that the only reason Prince William doesn't wear one is because he's just not a big jewelry guy. A royal spokesperson told the publication that it "was something the couple discussed but Prince William isn’t one for jewelry — he doesn’t even wear a signet ring — and decided he didn’t want to. It really is just down to personal preference."

Prince Charles isn't quite as anti-jewelry as his eldest son. Metro reports actually did wear a signet ring on his left pinky when he tied the knot with Camilla Parker Bowles (now the Dutchess of Cornwall) back in 2005. But he never got a wedding band and doesn't consistently wear the pinky ring (although, you can see him wearing it in the above picture of the two).

Not sure what a signet ring? Don't worry, neither was I. But luckily for all of us, I looked it up! Basically, it's a ring that has your family crest on it so... if you have a family that's, say, royal it would be a pretty swaggy piece of jewelry to rock.

It's interesting that in the photos we see Prince Harry wearing a wedding band but not the signet. Maybe he's just not a big pinky ring guy. Either way, I personally think it's adorable that he's chosen to do his own thing and wear a wedding band to truly display his love and commitment to Meghan to the entire world.

More like this
Zac Clark & Tayshia Adams Are Wedding Planning & I’m So Pumped
By Lydia Wang
When Are Ariana Grande & Dalton Gomez Getting Married? Here's The Reported Tea
By Corinne Sullivan
Madison LeCroy's Reaction To Jennifer Lopez & Alex Rodriguez's Breakup Is Coy
By Corinne Sullivan
Stay up to date