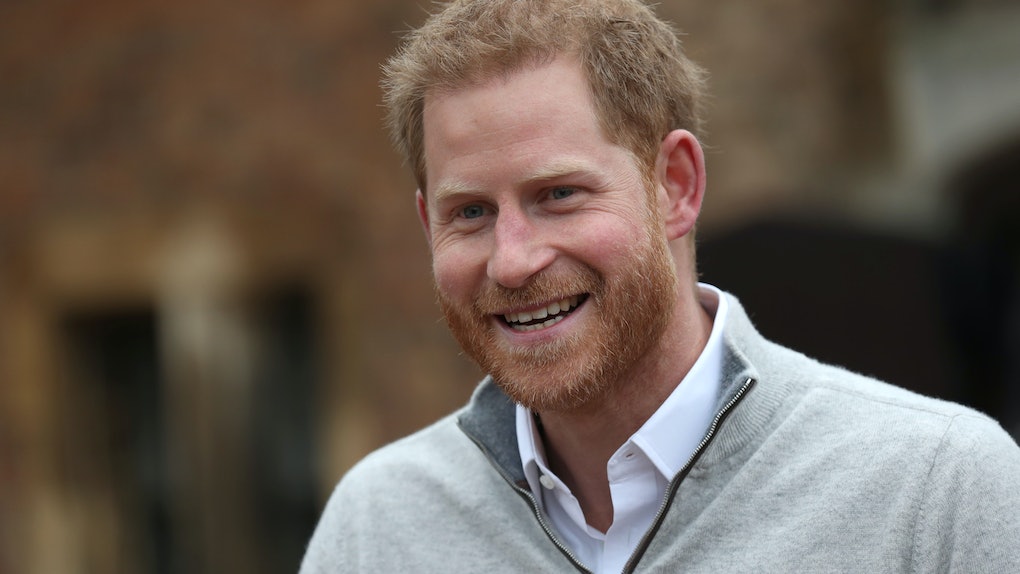 Where were you when Prince Harry and Meghan's first baby was born? For those who've been following this royal couple closely, that glowing notification (or lucky glance over at Twitter's trending topics) was everything. And of course, we're not the only ones who are lit about a new little royal to welcome into our hearts. Prince Harry's body language after the royal baby's birth is absolutely oozing with warmth, happiness, and pride in his new family.

In a post shared by the Duchess and Duke of Sussex's official Instagram account, @sussexroyal on Instagram, royal aficionados can watch a Harry's solo press conference post-birth. It's hard to the miss the tenderness and big grin on Harry's face as dishes on the birth of his son. "He shows all the signs of a beaming, proud father in these clips," says Lisa Mitchell, a body language expert and coach.

"As he announces the birth and as he says the words 'baby boy,' his whole body shows his happiness," Mitchell continues. "He lifts up on his toes a bit and kind of bounces with excitement as he shares the birth of his son. You see him do that several times throughout his announcement showing continued excitement and happiness."

In the first Instagram clip, Prince Harry goes on to marvel about Meghan, saying, "How any woman does what they do is beyond comprehension." He makes a "mind blown" gesture. That, Mitchell says, shows how utterly in awe of Meghan he is. "He's visibly proud and amazed of Meghan," she says.

Another gesture Mitchell picks up on is the one Harry does when he goes on to thank everyone for the love and support. "It’s been amazing," Harry says. "I just wanted to share this with everybody." He touches his heart and brings his hands back toward the crowd. "He feels affection for them and appreciation that they are there to share in his joy of the moment," Mitchell explains. "It creates a feeling of warmth and connectedness in sharing that experience."

Reiterating how proud he is of his wife, Harry says, "As every father and parent, we want to say our baby is absolutely amazing. This little thing is absolutely to die for. So, I'm just over the moon." Mitchell points out, "As he says 'as every father and parent.' he gestures from his heart again and then mimics holding his son. He's truly beaming, and you can feel his love and excitement for his son through those gestures."

With each moment in the clips shared by the royal Insta account, Harry looks like he's just vibrating with love and enthusiasm. "He beams a genuine smile at every mention of his son and wife. He can't control his excitement as he shares his feelings of love and wonderment at the process of having a son. And he's genuinely enjoying the act of sharing his joyful news with the world," Mitchell adds. "There's zero chill with Prince Harry in this instance and I'm so glad that he's lost the formality and is sharing the genuine, emotion-filled moments of welcoming his son with us."

All in all, the verdict is in: Harry's reaction to his newborn son just infused with fatherly love and joy. And that kind of excitement is just contagious.