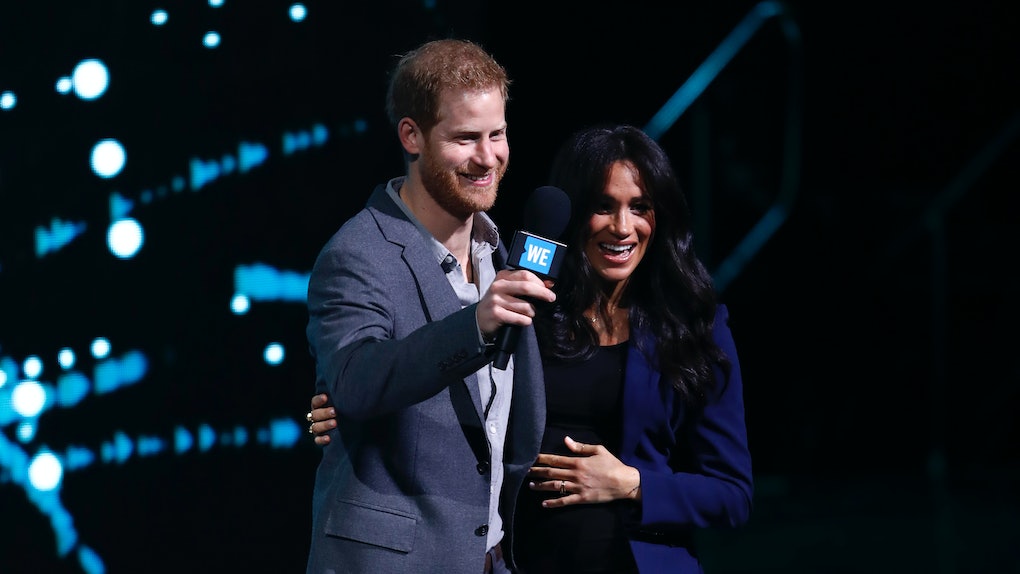 As if they haven't melted our royals-obsessed hearts enough, Prince Harry & Meghan Markle's body language on WE Day UK 2019 was everything you love to see in your favorite celebrity couple, especially on a day of service. Only Prince Harry was slated to appear and give a speech at the activism event, but brought Meghan up on stage with him as a surprise. Founded in 1995, the WE Charity puts on WE Day each year to mobilize British kids and teenagers to give back in their community and beyond. Naomi Campbell, Liam Payne, and Iskra Lawrence also made appearances.

During his speech, Harry referenced Meghan, saying , "As my wife often reminds me with one of her favorite quotes by Martin Luther King Jr.: 'Darkness cannot drive out darkness; only light can do that. Hate cannot drive out hate; only love can do that.'" Of course, the mere mention of Meghan's name gained cheers from the audience. Once Harry finished his speech and confessed to the crowd, "I'm now going to try and drag my wife on stage," Wembley Arena erupted. Help her up to the stage he did, and maximum cuteness ensued. Looking at Harry and Meghan's body language, it's clear that these two are definitely into each other. Breaking it down we have body language experts Traci Brown and Patti Wood.

In a word, Brown says, this photo is cute. "Harry is fully protecting Meghan with his arm around her," Brown says. "And she's protecting the baby, shielding from the crowd with her hand."

"I love the photo with their heads together, leading to upper bodies together in a beautiful, little supportive A-pose," Wood says. Quite literally — since their heads are together — this pose signifies that Meghan and Harry are like-minded. "Their light-filled smiles show they are both having tender moment together, as they enjoy the bigger moment with the crowd."

Brown also finds this photo cute. Yes, Meghan is waving to the stadium, but, Brown observes, "They're attached down the middle as a unit." If you're about that royals life and have been keeping tabs on their appearances, you know that Harry and Meghan's body language constantly convey that they're in tune with each other — no matter how big the crowd.

"Whatever is going on is touching Harry's heart and she's all in, too!" Brown says. "He may be looking for her reaction and approval of his emotions. Kinda sweet!" It's clear that Harry does care about having Meghan by his side in all of his pursuits. She's not just there for the fun royal appearances — she's here by his side in philanthropy work, too. He even made sure to touch on how she's influenced him intellectually and politically in his speech by dropping one of her favorite MLK quotes.

Again, as Brown points out, the two are attached and they're "being playful with the crowd together."

Wood also likes how relaxed Harry's body is and how he's leaning a bit forward. "He is not in the royal ramrod straight posture." This is lovely to see, especially since royals body language tends to err on the side of reserved.

She's proud of him

Looking at this photo, Brown says, "She's showing off how proud she is of him and trying to give him center stage as he waves to the crowd. Notice how she's standing a little bit behind him. She may be trying to prove how great he is to someone in the audience that she's got her eyes locked on." Not only are these two on the same page, but everything about their body language shows that they are equals and are mutually supportive of each other.

While Harry used the word "drag" to describe what he did, there was nothing reluctant or begrudging about this interaction. If anything, Meghan's physical response to Harry reminded us that yes, this couple is all in. Cheers to the royals that keep serving us wholesome relationship goals, no matter the event or what coast they're on.