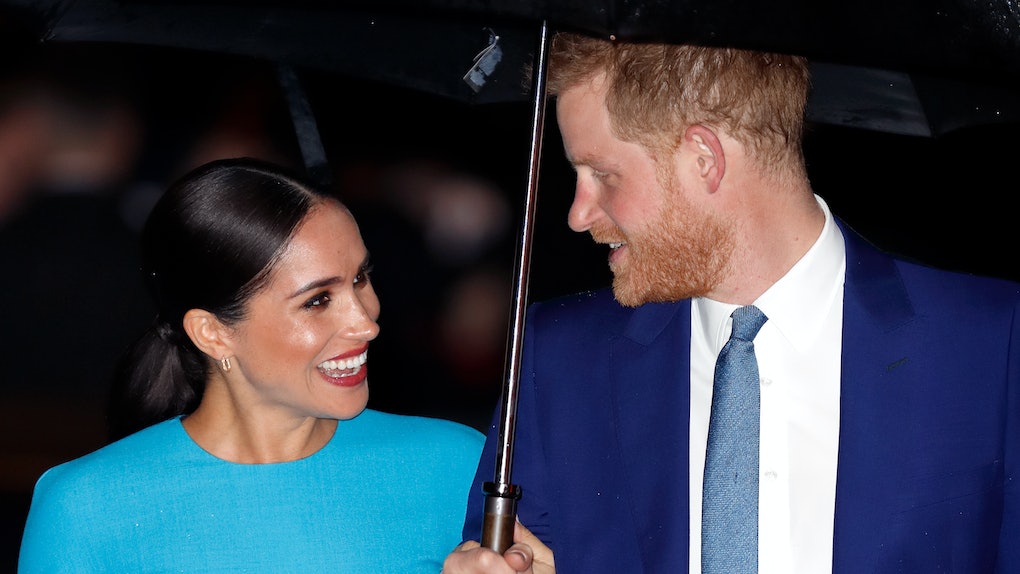 The first "I love you" is always a huge relationship milestone, even for royal couples. For example, Prince Harry and Meghan Markle reportedly said “I love you” after just three months of dating. "Three months into their relationship, a Meghan friend said, they had already begun swapping the words 'I love you'. It was Harry who said it first, but Meghan immediately replied, 'I love you, too.' From there it didn’t take long for them to begin talking in non-oblique terms about their future," an excerpt from new book Finding Freedom by royal reporters Omid Scobie and Carolyn Durand revealed, per Entertainment Tonight. (Elite Daily reached out to the royal couple's reps for comment, but did not hear back in time for publication. The duke and duchess were not directly interviewed by Obie and Durand for this book.)

Based on the book, it appears their entire relationship was very much the whirlwind you might have expected it to be. It all reportedly started with a three-hour-long first date. "On that first date at Soho House’s Dean Street Townhouse, Harry quickly [realized] that impressing Meghan was going to be tougher than just giving her one of his big smiles," the book wrote, per Entertainment Tonight. "Perhaps she sensed his nervousness, because the couple were somewhat bashful at first. However, it didn’t take long for them to start chatting easily."

They reportedly agreed to go on their second date at the same place again the next night. The night after that, Meghan was invited to come chill at Harry's place (you know, Kensington Palace). "When Harry opened the door, the prince towered in the small hallway with lots of coats hung on hooks and his boots by the door, just like any regular home," the book claimed, per Entertainment Tonight. "Meghan had enough dating experience to know a charmer when she saw one, and Harry was obviously not at all that. If anything, he was unfiltered. While it was clear he wanted to impress her with details about his work, he spoke without overthinking — and he never mentioned anything about being a royal or a prince."

Six weeks later, Harry was reportedly whisking her away for their now famed trip to Africa. "He told her to arrive in London and he would handle the rest. Having flown in from Toronto, Meghan spent one night with Harry at Kensington Palace before boarding a flight to Johannesburg the next morning. That was followed by two hours on a private light airplane to Maun International Airport," the book explained, per Entertainment Tonight. "Then they jumped into a 4x4 to Okavango Delta — a stunning 5,800 square mile wetland in Botswana’s safari country. They stayed for most of the trip in one of the $1,957-a-night deluxe tents."