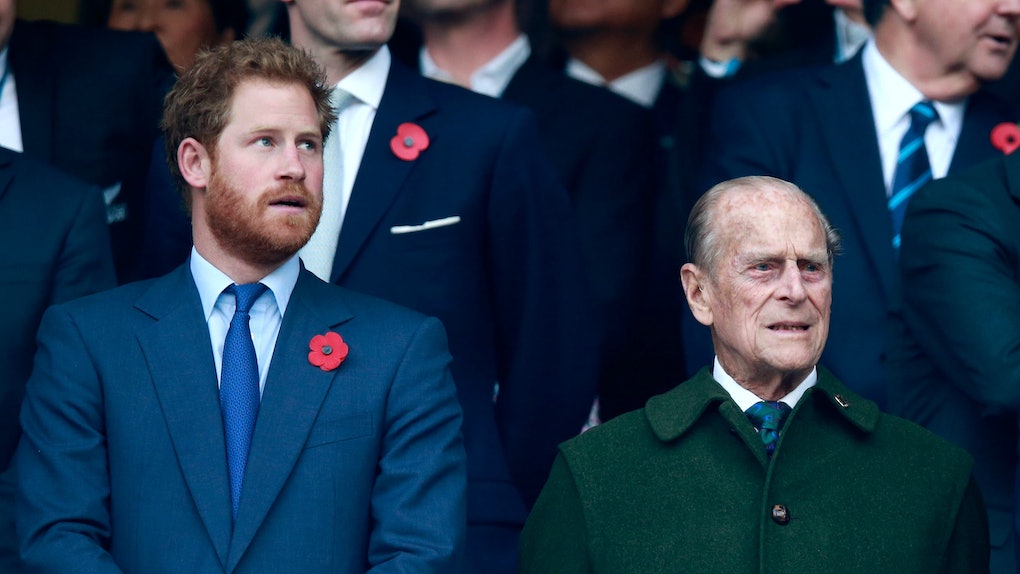 Prince Philip's death on Friday, April 9, has prompted royal fans to take a trip down memory lane. On April 11, royal photographer Chris Jackson shared a picture of Prince Philip in his 30s while wearing the Tropical Dress of the Blues and Royal, which is a cavalry regiment of the British Army, and it's gone viral because it's making people do a double take. They can't believe how much Prince Harry looks like Prince Philip did in this photo from the '50s. When you see it, you'll be thinking the same thing because Harry's bushy red beard, blue eyes, and beaming smile are almost exactly like his grandfather's were when Philip was Harry's age.

Jackson shared the photo after finding an old copy of a French magazine featuring a picture of Prince Philip at the age of 36. "I was reminded today of this incredible vintage @parismatch_magazine from 1957 I acquired a few years ago. I was blown away the minute I spotted it. It always reminds me of the unique, historic reference points that Royal photography provides. The front cover features a fantastically suave Prince Philip on tour with The Queen," Jackson wrote.

The original photo seemed to have been in black and white, but then it got colorized. Soon after Jackson posted the snapshot to his Instagram, fans pointed out the similarities between Prince Philip and Prince Harry, particularly their matching beards and smiles. "I thought it was Harry😍," "Harry looks soooo much like his grandfather!!" and "The smile and the beard makes him look like Harry," were just some of the comments.

What makes the photo even more amazing is Harry wore that same uniform in 2012 while he was in the Bahamas as part of a Diamond Jubilee tour. Take a look:

On April 12, the Duke of Sussex honored Prince Philip by sharing an emotional tribute on the Archewell website. Harry said that while his grandfather will be remembered as the longest reigning consort to the Monarch, to him, he was a man with "great humor" and a "seriously sharp wit."

"Like many of you who have lost a loved one or grandparent over the pain of this past year, he was my grandpa: master of the barbecue, legend of banter, and cheeky right 'til the end," Harry wrote, adding Prince Philip will be missed by him, Meghan Markle, Archie, and their future daughter.