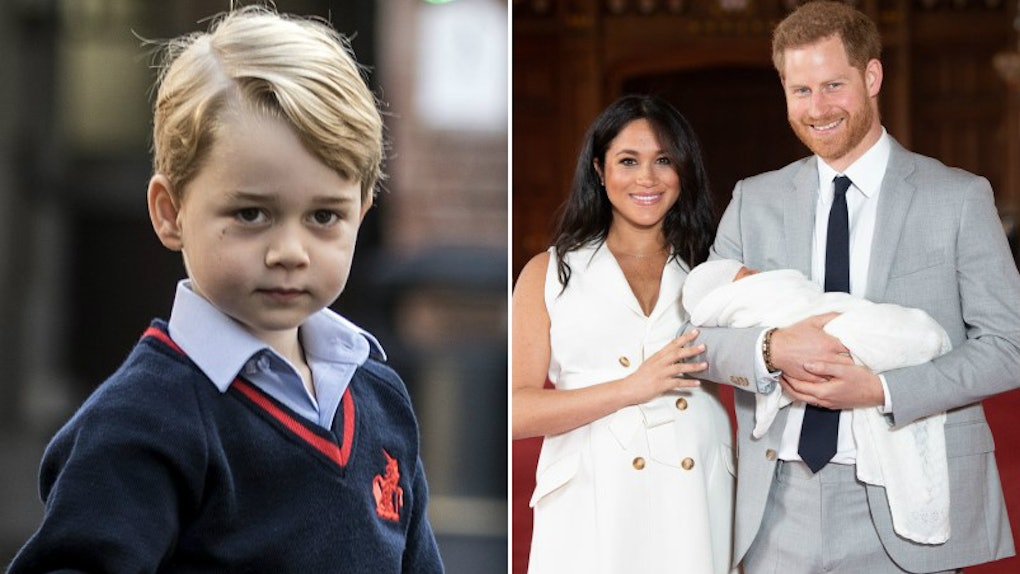 Prince George May Have Hinted At Archie's Name Months Ago

Well, it’s official! The Duke and Duchess of Sussex have officially named their baby Archie. The royal family has been awaiting Baby Archie aka Baby Sussex for quite some time. And I’m sure his cousins are overjoyed at his arrival. Actually, Prince George may have hinted at Archie's name months ago.

While Baby Sussex’s official name is Archie, it may have been Prince George's name first in a way, since Prince George reportedly takes Archie as his nickname. At least, that’s what The Sun speculated back in January 2019 when George introduced himself to a woman he didn’t know as “Archie.”

In speaking with The Sun, the woman explained how it all went down. Apparently, Prince George approached her and wanted to pet her dog. The woman let him, of course, and even went with his story of being called Archie.

“I was asked by a police minder not to take a photo of the children, which I didn’t, but George started stroking my dog. Just to be friendly I engaged in a bit of small talk and I asked George what his name was, even though obviously I knew it,” the woman recalled.

She was really surprised when George revealed his name to be something other than what the world knows him as.

"To my astonishment, he said, 'I'm called Archie,' with a big smile on his face," the woman told The Sun. "I don't know why he calls himself Archie, but kids often play with their names, and I think it's lovely."

It’s not unusual for members of the royal family to have nicknames. Prince George himself used to be called PG at school. And all the rest of his family actually have code names for when they’re out and about So, maybe Archie is his code name.

According to a September 2018 report from the Daily Mail, Prince George’s parents William and Kate, Duke and Duchess of Cambridge, have some pretty interesting code names. When spoken of in code, they’re called "Danny Collins" and "Daphne Clark." Meanwhile, Harry and Meghan, Duke and Duchess of Sussex, are known as "David Stevens" and "Davina Scott.”

Whatever the case is for Prince George, it’s pretty clear that he likes the name Archie. I wonder how that will go over as Baby Archie grows up. Who knows, maybe Archie will go by one of his other names. His official name is Archie Harrison Mountbatten-Windsor, so he could go by Harrison as he gets older.

Harry and Meghan officially announced the baby’s name via Instagram on Wednesday, May 8. Their Instagram statement read as follows:

The photo they shared was of baby Archie, Queen Elizabeth, Prince Philip, and Meghan’s mother, Doria Ragland. So, the whole family was on hand for the introduction of the new royal baby. The photo of all of them together is super cute as well. Here’s a look at it:

More like this
Here's Why Harry & William Will Not Walk Together At Prince Philip's Funeral
By Brandy Robidoux
Emilia Clarke's Comic Book 'Mother Of Madness' Is Full Of Girl Power
By Ani Bundel
8 Facts About Lisa Delcampo On 'The Circle,' AKA Lance Bass' Assistant
By Rachel Varina
Stay up to date