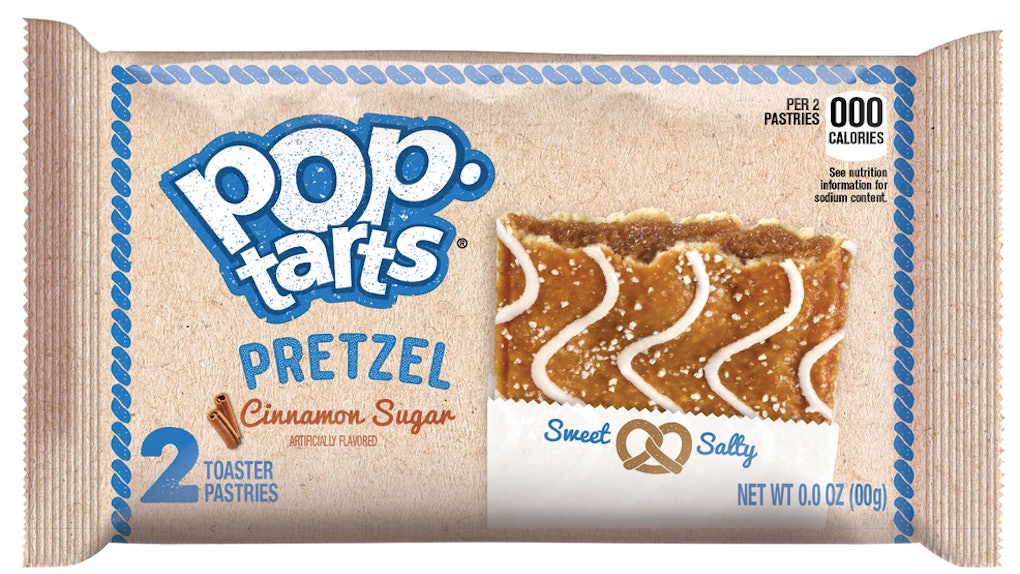 Breakfast is seriously the best meal of the day. There are just so many ways you can make your morning bite one that'll energize you for a long day ahead. So breakfast foodies will definitely want to check out the new Pretzel Pop-Tarts hitting shelves soon, because it's a salty kick that's bursting with flavor. Prepare your toaster because Pretzel Pop-Tarts are coming to shake up your breakfast routine this winter.

Pretzel Pop-Tarts were unveiled during the 2019 National Association of Convenience Stores (NACS) annual trade show in Atlanta, which was held from Oct. 1 through Oct. 4. Kellogg's announced the big news, sharing that the new flavors will include Pretzel Cinnamon Sugar and Pretzel Chocolate. According to the company, Pretzel Pop-Tarts will have "a delicious filling inside a pretzel-inspired crust with salt flake topping." The infusion of both sugar and salt in one Pop-Tart sounds like the perfect grab-and-go snack that's both tasty and convenient. Launching in December 2019, I'm already counting on these Pretzel Pop-Tarts paired with a cup of hot chocolate to keep me warm throughout the winter.

Instagram foodie @CandyHunting was lucky enough to get a taste of the new product at NACS. Sharing the sneak preview with fans in an Instagram post, @CandyHunting reviewed the snack: "New Pretzel Pop-Tarts will be out in December! There are two varieties: Brown Sugar Cinnamon and Chocolate. From what I could tell from the small sample pieces I tried, they have the same texture as normal Pop-Tarts, but have a distinct pretzel flavor and added saltiness."

Fans sound like they're both shocked and super excited for the Pretzel-Pop Tarts, and understandably so. Replying on @CandyHunting's Instagram post, users reacted to the unveiling of new flavors. User @tiljunkdouspart wrote, "I can't wait! These sound amazing!" and @madscg commented, "What the heck are all these amazing snacks?"

Kellogg's didn't stop with just the salty news — the company also gave attendees of NACS a sneak preview of the new Froot Loops-flavored Pop-Tarts. You'll want to mark your calendars, because according to Bustle, the new flavor will be released early next year as a limited-edition product. Kellogg's shared the details with Bustle: "Starting January 2020, two beloved Kellogg brands are combing for a first-ever mash up. Introducing new Froot Loops Pop-Tarts, a tasty, frooty treat with all the deliciousness you'd expected from these two favorites." The iconic flavor of Froot Loops mixed with classic Pop-Tarts sounds like a colorful snack bursting with sugar and flavor.

It's turning out to be a big year for Pop-Tart innovations, since the breakfast brand recently released two cupcake-inspired flavors in June 2019: Frosted Chocolate Cupcake flavor, which was brand-new, and the Frosted Confetti Cupcake flavor, which made a triumphant comeback. There was also the return of Pop-Tarts cereal in the flavors Frosted Strawberry and Frosted Brown Sugar Cinnamon. I'm personally a huge fan of the cereal, since it's nice to have an alternate breakfast option from time to time that's still packed with bites of Pop-Tart flavor.

It won't be long until winter comes, so get that toaster ready and you'll be chowing down on this pretzel-y twist on your favorite breakfast treat in no time.