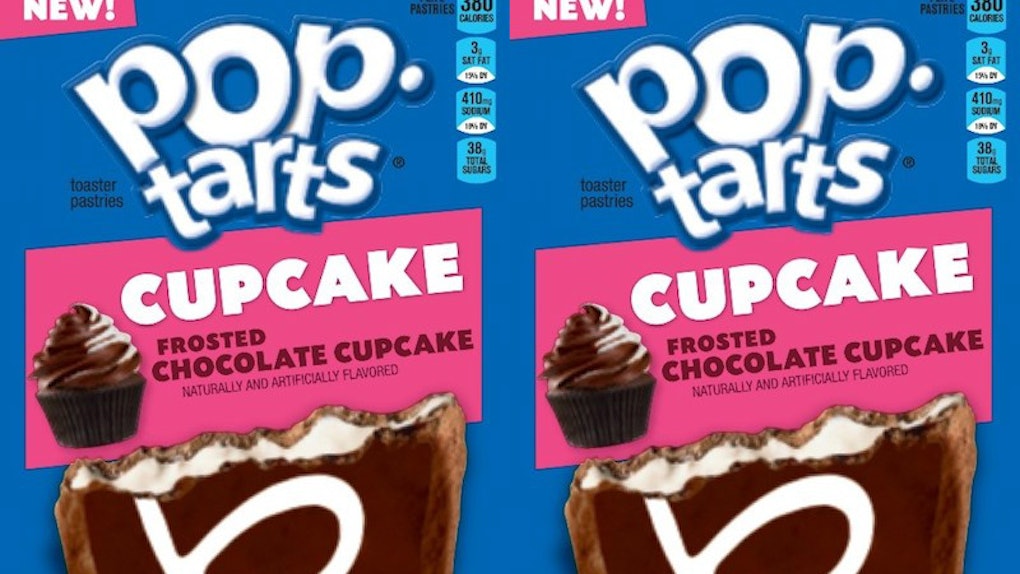 I'm a pretty big fan of Pop-Tarts, but I'm an even bigger fan of dessert. That's why I'm so excited for Pop-Tarts' new Frosted Chocolate Cupcake flavor to hit the shelves. That's right: Kellogg's is releasing a brand new Pop-Tarts flavor that tastes like frosted chocolate cupcakes, and I am so ready for it. Between its chocolate icing and creamy insides, it's the perfect snack for chocolate lovers and dessert enthusiasts alike. Heck, I'd even eat it for breakfast. There's nothing like starting your day on a sweet note, am I right?

On Tuesday, April 30, Kellogg's officially announced the brand new flavor via press release. However, Frosted Chocolate Cupcake wasn't the only flavor that the company unveiled. Kellogg's also announced Frosted Confetti Cupcake, which is a flavor that was already released in June 2017. However, fans wanted it back — so the company listened.

Instead of bringing it back alone, though, the company is releasing the Frosted Confetti Cupcake and the Frosted Chocolate Cupcake flavors together in June 2019. With that being said, Pop-Tarts customers with a sweet tooth can enjoy each Cupcake variation throughout the summer, whether they're into chocolate or vanilla. I don't know about you, but I think they both sound delicious. Plus, I can't even imagine how good they'd taste straight out of the toaster first thing in the morning.

I, personally, didn't try the Frosted Confetti Cupcake when it became available in June 2017. But if you tried it (and liked it), rest assured that you'll be able to pick it up again in stores nationwide when they're available. The same goes for Frosted Chocolate Cupcake, so get your shopping lists ready. Whether you decide to buy these Pop-Tarts for breakfast or dessert, you'll be totally set on the sweet front.

Joe Beauprez, director of marketing for Pop-Tarts, talked about the upcoming flavors in a press release. He said, "At Pop-Tarts, we love to give fans the flavors they love most, and our research shows that over 50% of our fans eat Pop-Tarts as a snack. We reimagined the classic dessert in Pop-Tart form, giving our devoted fans more opportunity to enjoy this delicious, sweet treat any time of the day."

Those of you who are already adding these flavors to your summer shopping lists don't need to rush. The Frosted Chocolate Cupcake and the Frosted Confetti Cupcakes flavors weren't announced as "limited-edition" flavors in the company's press release, which means they're now included in the current Pop-Tarts lineup. With that being said, fill your carts (and snack cabinets) accordingly.

Before you head to the grocery store and start stocking up, you'll probably want to know how much these Pop-Tarts flavors cost. According to the company, the suggested retail price for an eight-pack of both flavors is $2.09. With that being said, you'll be able to grab a box of both for under $5.

Again, whether you're planning on eating these Pop-Tarts for breakfast, dessert, or a snack in between, you'll be able to enjoy their cupcake-inspired flavors.