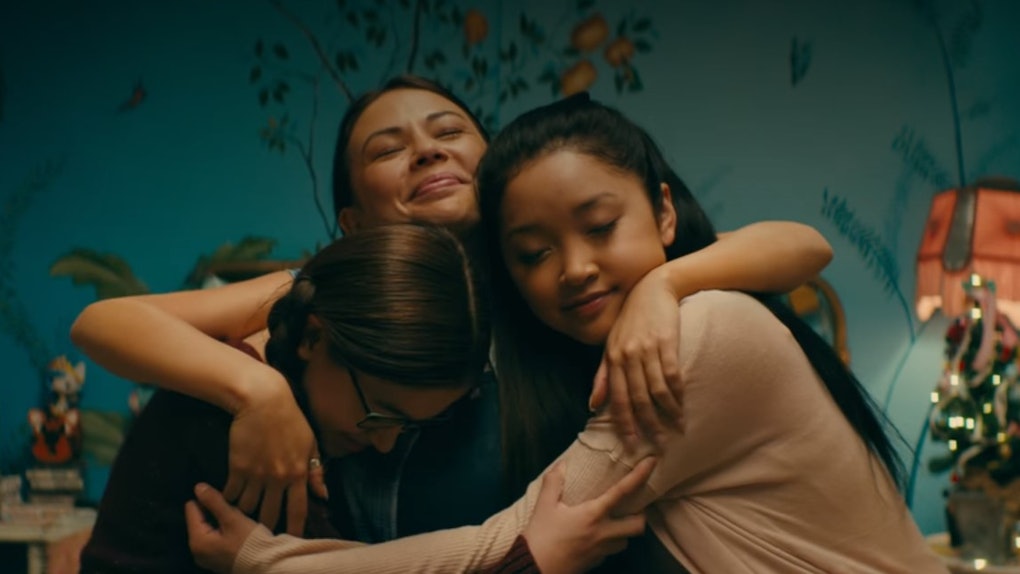 The credits rolled in as Lara Jean Covey and Peter Kavinsky walked arm-in-arm down the lacrosse field. Their backs remained turned to the camera. In those final moments, To All The Boys I've Loved Before went down in my memory bank as a film to remember. A nearing-30 mother-of-two, I realize I am hardly its target audience. Still, I recognized about five minutes into things that the film adaptation of Jenny Han's novel was something special. It's something that a teenage-me certainly would've benefited from (and that current-me shed more than one tear to, TBH). Something nearly perfect, except perhaps for one intrinsic flaw. Plus size representation in To All The Boys I've Loved Before was noticeably absent from the summer hit, and it definitely would have made sense to have throughout the flick.

There's a lot to love packed into an hour and 40 minutes. For starters, other varieties of representation are pretty great. Unlike many of its counterparts in the genre, which tend to favor conventionally attractive white girls (see Clueless, The Princess Diaries, Easy A, A Cinderella Story, Paper Towns, etc.), the film centers an Asian American protagonist and her sisters. It features an openly gay man of color, whose sexuality isn't cause for ridicule among his peers. From the popular mean girl Gen, to little sister Kitty, to bestie Chris, to Lara Jean herself, TATBILB is also filled with strong female characters who are at times bold, loud, and rule-breaking, and at others introspective, observant, and thoughtful.

The fact that Lara Jean, who is shy, book smart, and stylish in a way that doesn't align with her classmates' views on style, doesn't have to change a single thing about herself in order to get the guy is also huge for a film that's going to be largely watched by the coming-of-age crowd. Much of young adult cinema is renowned for the classic makeover scene (again, see Clueless, The Princess Diaries, or even going way back, Grease). The only thing Lara Jean makes over near the end of the movie is her room, which is in major need of a clean.

What's unfortunate is that, despite all of this, no one thought to include a redeemable plus size character in the lineup. In a film that clearly prioritized diversity and kept contemporary feminism in mind throughout, including diversity of size just didn't make the cut.

The thing is, there were plenty of opportunities in which to introduce a plus size character. They wouldn't have even had to have a leading role, even if that would've been pretty nice. Lara Jean's best friend or rival could've been plus size, albeit the idea of a fat popular chick is still probably too radical for most of the industry. One of Peter's friends, many of whom Lara Jean meets and interacts with as their fake romance blossoms, could've also been curvy. I certainly wouldn't have minded if one the boys LJ had loved before self-identified as fat. Or maybe one of her sisters could've been fuller figured. After all, plus size Asians have been vocal about the lack of representation of their experiences in media. Hell, there weren't even any plus size characters seen roaming the halls of the high school. The exclusion is just not realistic. Size diversity is an undeniable component of the world we live in, particularly in the U.S. where 67 percent of women are plus size, according to the International Journal of Fashion Design, and that includes the world we live in when we're teens.

While it's true that not every film can represent every identity, it doesn't seem too out-there to expect one that focuses on young adult characters to consider who its young adult viewers may be. A statistic that those of us who work in body positivity and fat acceptance advocacy come to hear a lot is that one in three American teens is clinically "overweight" or "obese" (terms often utilized in a disdainful, dehumanizing manner). If the statistic is true, it's safe to assume that a lot of those teens probably aren't turning on Netflix and seeing bodies like their own celebrated, or represented respectfully, or portrayed as interesting, clever, beautiful, or worthwhile. It's safe to assume that for the one-third of American adolescents who are plus size, even a side character in TATBILB, whose body and experiences resembled their own (particularly if no mention was made of their body) could have been a much-needed reminder that there is nothing shameful about the space they occupy.

To some, the lack of a positive plus size character in this film may seem like only a small thing to harp on. In the end, there were so many gems throughout this film. There was that moment when Chris confronted Lara Jean's father about his chosen profession: gynecology. There was the Korean face mask exchange between LJ and Lucas. And who can forget the real-talk from Kitty, as she pointed out that Lara Jean's life was less than fulfilled? In the end, there are few young adult films that do so much to portray empowering and progressive scenes between family members, friends, and love interests.

The fact remains, however, that it is a young adult film. Family, friendship, school, and romance aren't the only things on young adults' minds. There's also, unfortunately, body image. Around 80 percent of American girls have been on a diet by age 10, according to a study conducted by Common Sense Media. Dissatisfaction with our bodies remains a key cause of poor mental health through adolescence and beyond. It's no wonder, really. In a culture where fatness is so stigmatized, where only some types of bodies ever make it onto our screens (and others only make it onto our screens to be mocked), and where worth is so tied to the acquisition of one very specific type of beauty, we're bound to get a little messed up along the way.

This is where a film like To All The Boys I've Loved Before had an opportunity to do things differently. In many ways, it did do things differently. It made room for people we rarely see as we're browsing through our streaming services. However, there are a lot of plus size babes who didn't get to see themselves, and who spent an hour and 40 minutes watching a story about strong young women and interesting, multifaceted teens, none of whom resembled who they are and the women they see around them every day.