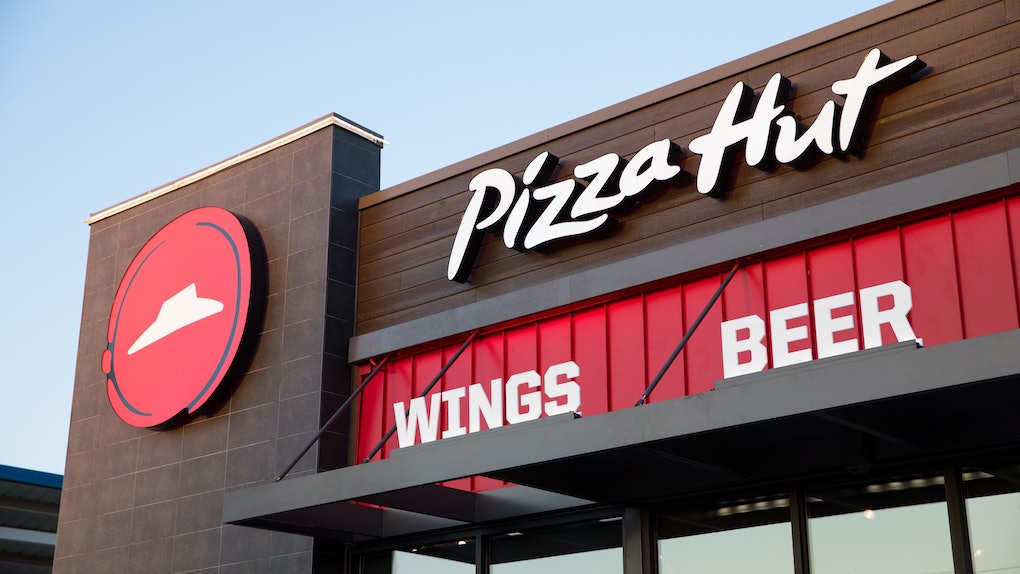 Now that I've gotten out of my Labor Day weekend BBQ coma, I'm starting to look forward to the changing leaves, crisp fall mornings, and football season. The NFL is kicking off its season on Thursday, Sept. 6, and this year's official NFL pizza sponsor, Pizza Hut, is making sure that you're celebrating kick-off with all the NFL prizes and pepperoni pies that you could want. Every football fan is going to want to get on these rewards ASAP, because Pizza Hut's NFL Game Plan app could send you to the Super Bowl in Atlanta, Georgia in February 2019. Here's how you can enter to watch the biggest game in football live.

Starting on Tuesday, Sept. 4, football fans can head over to the pizza chain's Hut Rewards platform, which now includes a "Game Plan" section in honor of tailgating season. There, users can find special deals, get kickoff reminders for their favorite NFL team, and enter themselves for the chance to score a football-themed prize weekly. When signing up for Hut Rewards, make sure to select the "Sign up with Game Plan" option by choosing your favorite NFL team, and voila, you'll be in the running for a handful of cool prizes every week.

According to a press release, Pizza Hut is kicking things off the first week with a special Homegating Kickoff Kit, which contains a Bose SoundLink Revolve speaker, a New Era Official Sideline Home 9FIFTY hat, a $100 Pizza Hut gift card and a $50 NFL Shop gift card. It's basically like Christmas come early if you're an NFL fan.

Meanwhile, during weeks two through 17, you can win NFL merchandise to rep your team of choice as well as "homegating necessities," but the icing on the cake is that you and a friend will automatically be in the running to win an all-expenses paid trip to Atlanta to watch the final two teams match up at the exciting Super Bowl LIII on Feb. 3, 2019. It's a once-in-a-lifetime sporting opportunity, which includes a cool Halftime Show from a leading artist, aka the most-watched musical event of the year. With star-studded past lineups like Beyoncé, Justin Timberlake, Katy Perry, and Bruno Mars, there's really no reason not to enter and try your luck.

In addition, you'll also be scoring some great rewards on pizza (it's Pizza Hut, after all). For every $1 you spend online through your account, you will earn 2 points, which can later be redeemed for a free pizza (a complimentary pizza is 250 points). If you sign up for Hut Rewards, you'll get a free pizza when you order your first pizza through the platform. After that, every large 2-topping pizza purchased during football season will only put you back $7.99, which is a total steal for your crew's game day munchies.

In addition, every order that you make through the Hut Rewards platform counts as an extra entry into the Super Bowl sweepstakes, so there's an extra incentive to make a Hut pie part of your "homegating" routine. According to the fine print, the program only applies to online orders made at participating stores, so I'd double-check that to make sure you're racking up all the points you deserve. Also, additional entries from pizza orders are capped at one additional sweepstakes submission per day, so there's no need to go ham on the extra orders unless you want to.

With tailgating season coming to your couches and TVs on Thursday, Sept. 6, there's only a few days until the football mania officially hits and you can get to "hut, hut, hutting" with a pizza in hand.

More like this
Lenny & Larry's Summer Snackin' Sweepstakes Could Win You A Free Glamping Trip
By Daffany Chan
What Is Taco Bell's Times Square Digital Cantina? It's A Unique Experience
By Lara Walsh
Here's How To Make Chipotle's Dragon Sauce With 2 Simple Ingredients
By Daffany Chan
Stay up to date