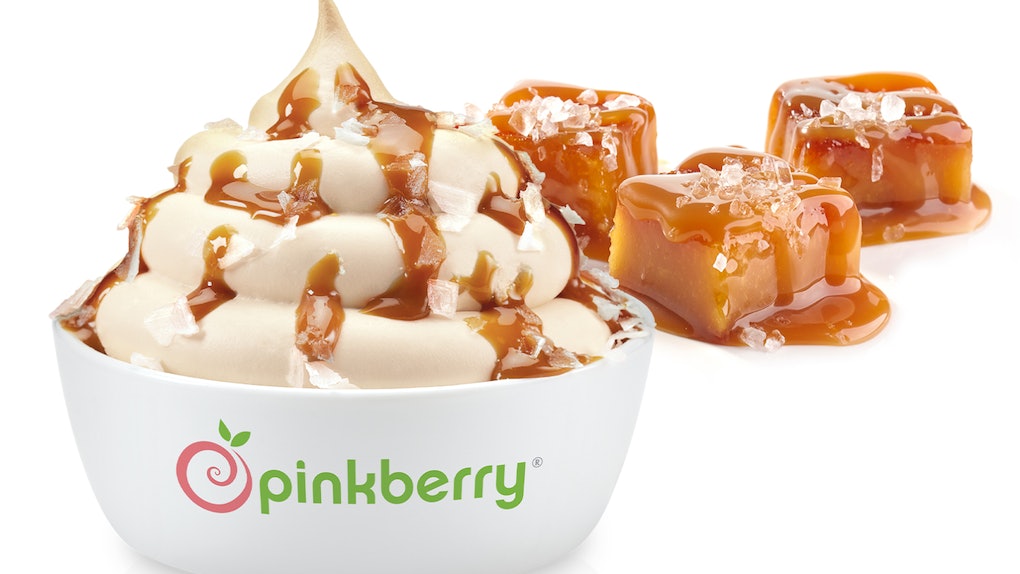 I know it's hard to believe, but we're already more than halfway through August and fall is just around the corner. Personally, it feels like all the frosé-flavored sips and bites from patio season were suddenly swapped out almost overnight for pumpkin-flavored everything, and I have mixed feelings about the sudden transition. If you're still clinging to summer but are ready to start tentatively dipping your toes (or rather, your tastebuds) into autumn, Pinkberry's new Pinkbee's Salted Butter Caramel flavor will give you the best of both seasons. The best part? You can cool down with a cozy-flavored treat that doesn't include pumpkin. You know, just in case you don't want to spend the rest of August digging into PSL-flavored everything.

If you're a Pinkberry regular, you've probably sampled the company's extensive lineup of frozen yogurt flavors, which range from tried-and-true favorites like strawberry and chocolate to more inventive options like Cookie Butter, Tiramisu, Matcha, and Coconut Milk Cold Brew. Now, the retailer is bringing a little taste of fall to your go-to patio season bites, and I'm so here for the salty sweet offering. In a press release first shared on Friday, Aug. 16, Pinkberry revealed that it was marking the month's halfway point with the introduction of a seasonal flavor: Pinkbee's Salted Butter Caramel, which became available for a limited Time at Pinkberry locations as of Aug. 16.

While this fall-forward flavor combination will be a stand-alone flavor that you can pick and add to anything you want, you can also get it as a pre-set combination by ordering swirls of Pinkbee's Salted Butter Caramel that have been "topped with sea salt and a caramel drizzle." It's the perfect salty sweet offering to help you properly transition from summer to sweater weather in the most delicious way possible.

Melissa Hubbell, the director of marketing at Kahala Brands (the parent company of Pinkberry), said in the press release:

Heat waves continue across the country but here at Pinkberry, we are ready for cooler weather. So until then, we are just going to cool down and indulge in a classic fall flavor at the same time with our new Salted Butter Caramel!

Unfortunately, there's no telling exactly how long you can expect this cozy autumn-inspired flavor to grace your local Pinkberry, so I'd probably head to your closest location in the coming days and give this new offering a (s)whirl with some of your own additions if you're feeling like getting creative. Personally, I think chunks of dark chocolate or some Brownie Bites could make this even better, but there are tons of other toppings that you can choose from.

On the flip side, Pinkberry is one of my favorite froyo spots due to its constant rotation of seasonal goodies (I'm still dreaming about the Mango and Tajín combo that the company released back in July, if I'm being honest), so I'd keep an eye out for new tasty flavors coming down the pipeline as the seasons change and we head into fall. Happy munching!