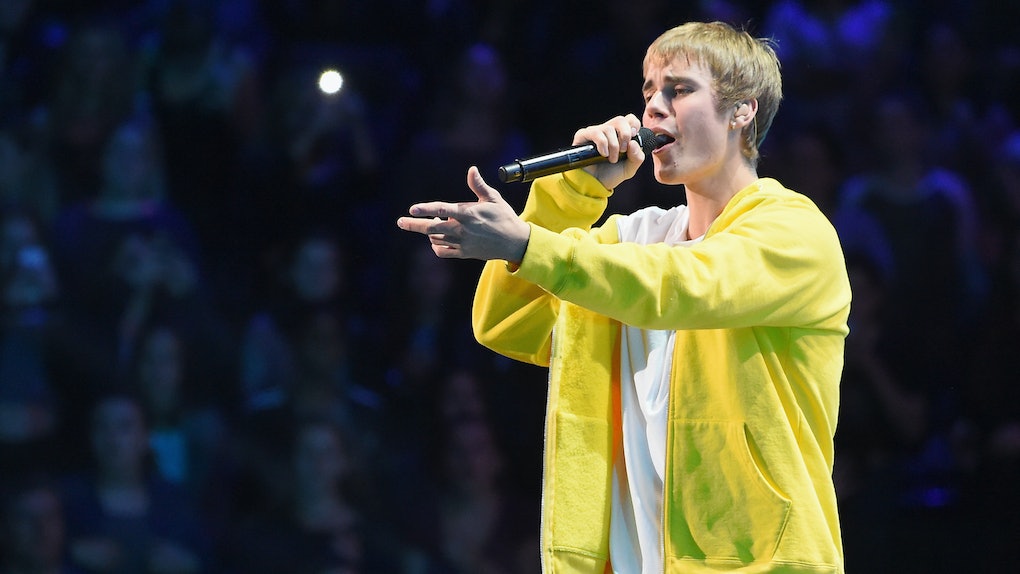 Remember the days of young Justin Bieber? Those innocent, sunshine days of side-swept bangs, American Apparel hoodies, and the truly masterful song "One Less Lonely Girl" (not saying that facetiously — I genuinely loved that one). Well, in the words of Taylor Swift, the old Biebs' can't come to the phone right now. Want proof? Justin Bieber got an insane torso tattoo — and the pictures of Justin Bieber's new tattoo are driving the internet insane.

Bieber unveiled his new body artwork in two Instagram posts, one of which features the singer walking around rather jauntily with his shirt off. His entire chest and torso has been inked up with what appears to be gargoyles, a skeleton, some statues, an archway, a lion, and a bear.

Basically, there's a whole lot going on there and hopefully Bieber is really committed to the design. After all, the singer already has over 60 tattoos covering his body, including wings on his neck, the word "seagull" on his left hip, and an angry looking tiger on his left arm.

Fans and the general internet were feeling, um, some feelings about Bieber's latest tats.

Here's the ink in question:

Some people were really, really not into it.

Others didn't know what to feel.

Some were very into it, and quickly jumped to the singer's defense.

You know what, though? There's gotta be an explanation for the excessive ink. The Biebs' has given a pretty concise roundup of the meanings behind each of his tattoos, and – love 'em or hate 'em — they all have some kind of significant meaning to him.

Let's take that tattoo of his leg that reads, "Better At 70." He explained on Instagram,

I look back at a lot of things in my life, mistakes, insecurities, and although I have felt I’ve wasted a lot of time it also makes me want to be better faster! For me personally I want to work everyday to be BETTER AT 70.

The tattoo of an Indian chief on his shoulder is a tribute to his grandpa.

"My grandfather always took me to the Stratford Culliton [games] every Friday night," Bieber tweeted in 2012. "This is for u Grampa."

Some of his ink didn't quite last, though. Like one that looks like a dead ringer for Selena Gomez on the singer's arm. During an interview with GQ in 2016 Bieber said,

Uh, this is my ex-girlfriend. So I kinda tried to cover her face up with some shading, but people still know.

He added that he's not really into lower back tattoos for men or women. "I think David Beckham has a lower tramp stamp," he quipped. "That's no good."

For all of you who miss the young, tattoo-free Bieber, you're sadly going to have to adjust. The Biebs is on a journey towards self-discovery and shedding his past. He told The Hollywood Reporter,

I know who I am and what I'm doing in my life and what I've accomplished and continue to accomplish as a performer, as a writer, as an artist, as a person, as a human being. I'm happy with the man I'm becoming.

Oh, and he's not really apologizing for any of the mistakes he's made along the way.

“Everyone, when they start growing up, realizes, ‘Man, I did some dumb sh*t when I was younger.’ It’s not just me... If I could go back, I wouldn’t really change much. I think it’s all my journey. That stuff made me who I am,” he told GQ.

Well, there you have it. Belibers, if you're looking for some OG Bieber, "One Less Lonely Girl" is still streaming on YouTube. I promise, it's just as good as you remember it.