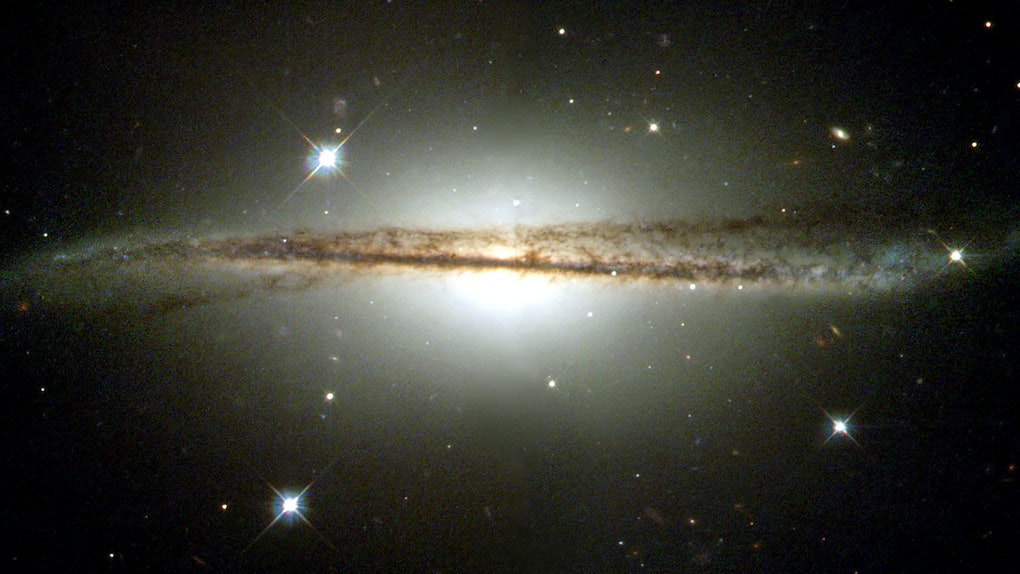 Are you already preparing to head into 2018 with nothing but love and light ahead? Well, put a pin that for minute because I have one more terrifying happening to throw your way before you flip that calendar page. Luckily, the frightening object in question is at a safe distance in outer space, but these photos of the "Halloween Asteroid" are still freaky AF.

The "Halloween Asteroid" (more affectionately known as 2015 TB145) was last seen from Earth on Oct. 31, 2015, according to Inverse. It turns out, that the "Halloween Asteroid" is aptly named in a couple of ways. First, there is the obvious connection between the name and it's last sighting on Halloween (duh) in 2015, but the look of the asteroid is arguable more chilling.

In certain lights, scientists from the National Science Foundation’s Arecibo Observatory in Puerto Rico discovered that 2015 TB145 eerily resembled a human skull. I'm not talking about a slight resemblance, either, like when you look at a cloud and see seven different shapes. This asteroid looks like a full-blown human skull: two eye sockets, a nose, and a mouth.

Oh, and don't forget that it's a freaking asteroid, so it basically looks like giant floating human skull is coming right toward Earth — totally normal.

The "Halloween Asteroid" is categorized as an Apollo-type near-Earth asteroid (NEA), according to Pablo Santos-Sanz, a researcher at the Institute of Astrophysics of Andalusia. When it passed by in October 2015, it did so at a distance of 300,000 miles (or 1.3 lunar distances) from Earth, according to Space.com. The "Halloween Asteroid" (AKA creepy floating space skull) measures in at about 2,300 feet wide, according to the study published in Astronomy & Astrophysics in February 2017, but the researchers also stated in their study that "a high-quality physical and thermal characterisation of a close-encounter object from two-week apparition data is not easily possible."

Luckily for the scientists (and your nightmares), the "Halloween Asteroid" is set to swing by Earth again in November 2018. Only this time, the skull-shaped asteroid is keeping its distance. When it passes by next year, it will be a whopping 105 lunar distances away from Earth. Perhaps 2015 TB145 wasn't pleased with its trick-or-treating loot in 2015.

In case you're not creeped out yet, here is another look at the "Halloween Asteroid."

Before you live out the rest of your days being scared of the "Halloween Asteroid," maybe it's best to learn a little bit more about it. According to Space.com, researchers believe that 2015 TB145 may actually be an extinct comet, and that many laps around the sun and encounters with harsh materials may have caused it to lose all of its water. OK, is it weird that I'm feeling bad for an asteroid right now? I mean, the "Halloween Asteroid" is just a shell of its presumed former-comet self, and now it's being feared and mocked for its resemblance to a creepy Halloween staple.

Even though the asteroid does truly resemble a skull, maybe we should cut it a break. The scientists who are studying it are still very much excited to obtain some new data during its 2018 visit toward Earth even though it will be much farther away than the last time.

Also, the next exciting Halloween-outer space mashup won't make its way toward Earth until 2088, so it's probably best to mark your calendars for November 2018 to enjoy (and be slightly scared of) the "Halloween Asteroid."

More like this
What Is Boo Bash At Disney World? The Halloween Event Has Rides, Music, & Themed Treats
By Cianna Garrison
These Tweets About How "Cheugy" Was Sold As An NFT All Point Out This 1 Thing
By Daffany Chan
Here's Where To Buy Naturdays Pineapple Lemonade Beer To Unleash Your Summer Vibes
By Cianna Garrison
Stay up to date