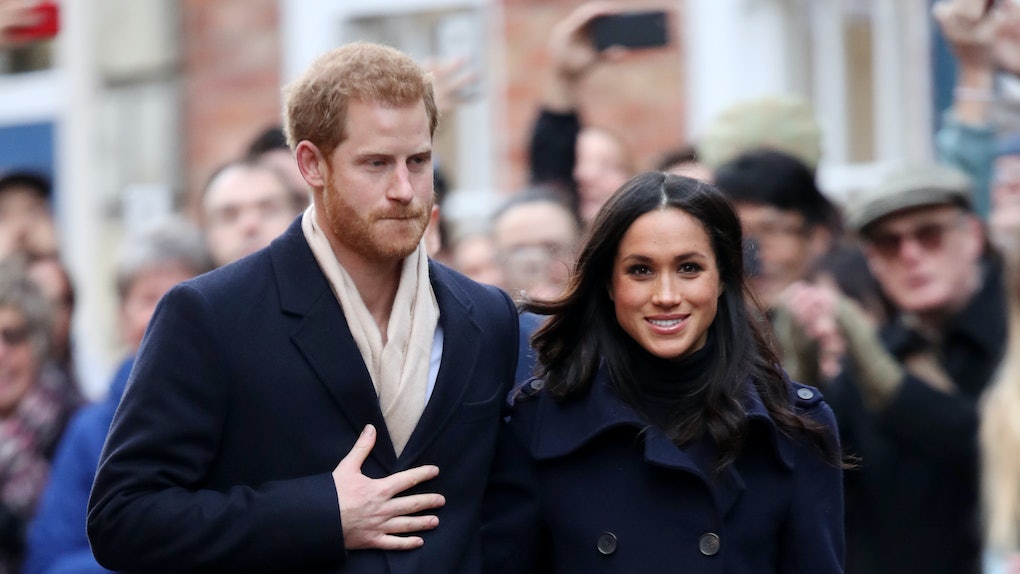 The newest royal couple visited Nottingham, England, on Friday, Dec. 1, where they greeted residents and attended a charity fair at Nottingham Contemporary. The event was put on by Terrence Higgins Trust in recognition of World Aids Day. According to Kensington Palace, the couple got to learn more about how the organization is working in the area to help those living with both HIV and AIDS.

Later on Friday, the two plan to visit Nottingham Academy to talk about preventing youth crime.

Sounds like a busy day to me. Actually, scratch that. It's been a busy week for the couple, who first announced their engagement on Monday, Nov. 27. An announcement from Prince Harry's father, Prince Charles, read:

After announcing their engagement, Prince Harry and Markle sat down for their first official interview with BBC News, where they gave more details about the proposal. Apparently, it all happened over a roasted chicken. Here's how the conversation went:

Can these two get any more adorable?

As for when the wedding is happening, we won't have to wait too long. On Tuesday, Nov. 28, Kensington Palace announced the wedding will take place at St. George's Chapel at Windsor Castle in May 2018. A six-month engagement? That'll fly by. The full statement read:

The marriage of His Royal Highness Prince Henry Of Wales and Ms. Meghan Markle will take place at St. George's Chapel, Windsor Castle in May, 2018. Her Majesty The Queen has granted permission for the wedding to take place at the Chapel. The Royal Family will pay for the wedding. Further details about the wedding will be announced in due course.

Can the Royal Family pay for my wedding, too? Just wondering!

Before they walk down the aisle, though, the couple has a few more boxes to check off the list. One includes Markle being baptised and confirmed, according to BBC News.

But no matter what comes in these next few months, we're sure the couple will enjoy every minute. BRB, going to start planning my royal wedding watch party now.