You've probably heard the news by now. American actress Meghan Markle is all set to marry Prince Harry on May 19, 2018. The happy couple officially announced their engagement back in November and the world can't wait to celebrate their upcoming nuptials, because who doesn't love a royal wedding? We have no doubt that Meghan's elegance and poise will shine when it comes to her big day, and now her most notable acting role will also feature a major "I do" moment. Photos Of Meghan Markle's Suits wedding dress are floating around, and as to be expected, she looks absolutely stunning.

Markle's on-screen life will reflect reality when it comes to the performer's long-running hit USA drama. Her character, Rachel Zane, is supposedly going to finally tie the knot to Mike Ross (Patrick J. Adams) after canceling their nuptials in Season 5, according to a Hello!, who reported the show filmed a wedding scene last month in Toronto. "I’m going to go ahead and say ‘Yes,’ how’s that?" Suits creator Aaron Korsch revealed to Deadline when asked if marriage was in the couple's future. The legal drama will return this January for the second half of Season 7. 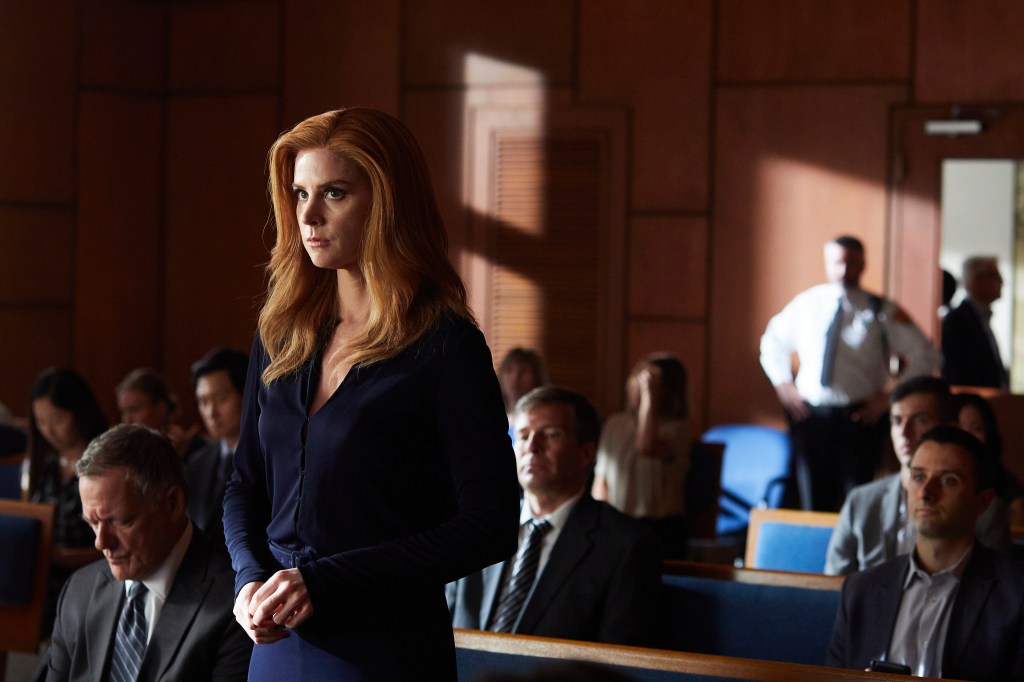 Now, back to that wedding dress... For her on-screen ceremony, Meghan reportedly rocked an Anne Barge "Versailles" gown with a plunging neckline and an A-line silhouette — the same look she wore when she didn't make it down the aisle in the Season 5 finale.

Meghan took viewers behind the scenes to the Suits wardrobe department to pick out options for the occasion in a video released last year. Although her character's known for those signature pencil skirts, fans had the opportunity to see her branch out and choose something a little more fancy. "So, we brought so many princess dresses...," PR, Marketing, and Fashion Director of Kleinfeld's Hudson Bay Jessica Mulroney remarks. Sorry — we can't help but focus on the word "princess."

Now, if only we could actually join Meghan as she shopped for next May's non-fictional nuptials. The world is waiting with bated breath to see what the gorgeous California girl will wear at St. George's Chapel, Windsor Castle, and the sketches making the rounds are pretty divine.

Meghan previously discussed her Suits character's wedding dress in a 2016 interview with Glamour, saying, "It's not my personal style, because I'm a lot more relaxed than Rachel, but I love that I got to play dress up in this gown." When asked about her idea of a perfect wedding dress she revealed,

I have the luxury of wearing beautiful pieces of clothing every day for work, so my personal style—wedding or not—is very pared down and relaxed. Classic and simple is the name of the game, perhaps with a modern twist. I personally prefer wedding dresses that are whimsical or subtly romantic. Delphine Manivet and Christos Costarellos are faves of mine for their uniqueness and beauty. And I will always be a fan of Ellie Saab. J. Mendel is spectacular as well, especially for more structural designs.

She also added that Carolyn Bessette Kennedy's ensemble was "everything goals."

If you're a Meghan fan, you probably already know that the actress/philanthropist/self-proclaimed foodie's style comes off as relatively effortless and comfy, yet chic. "Wear what makes you comfortable, and isn’t going to make you cringe in three years when you see the photo. I’m not very trend driven. I’ll pepper it in here and there, but invest in classic pieces and you’ll never regret it." she told MATCHESFASHION.com.

We're guessing Meghan won't be borrowing a gown from the Suits costume closet when her actual wedding day rolls around next spring. No matter which designer ends up dressing her, we have a feeling she'll look radiant and the moment will go down in royal fashion history.