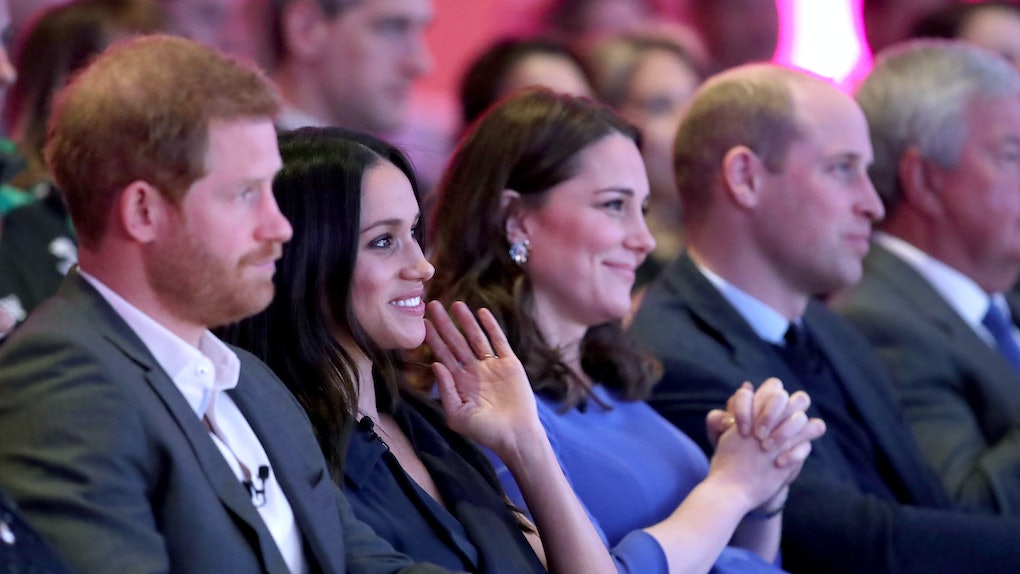 Prince Harry, Meghan Markle, Kate Middleton, and Prince William have a lifetime of public appearances ahead of them. While they technically made their first joint appearance at Christmas when they were all gathered together with the extended members of the royal family, their first official royal event took place on the morning of Wednesday, Feb. 28. The royals joined together for the first annual Royal Foundation Forum, and the photos of Harry, Meghan, William, and Kate's first official appearance together are regal AF.

The four royals' first-ever Royal Foundation Forum discussed the future of the foundation and the plans they hope to set in motion with the charity. The Royal Foundation was originally created by Prince Harry, Prince William, and Kate Middleton, but Markle will become an official patron after she and Harry get married in May, People reports. Markle, who has worked with many charities in the past, spoke during the forum, as did Prince William and Kate Middleton. Prince William first addressed how happy he was to have Markle joining their philanthropic efforts with the foundation and gave some insight into the inspiration behind starting the foundation. He said,

Ten years ago, Harry and I were still serving full-time in the military, but we were starting to look to the next stages of our lives. As we discussed together the best way to set out on our official work, we looked to the values our family had instilled in us. Both our parents had provided for us an example of diligence, compassion and duty in all they did. Our grandparents, The Queen and The Duke of Edinburgh, had made support for charity central to their decades of service to the nation and the Commonwealth.

Just looking at the photos Prince Harry, Meghan Markle, Kate Middleton, and Prince William at the Royal Foundation Forum, you can tell these four are ready to hit the ground running with this foundation.

They look like they're all best friends who just happen to work together and be in-laws, and I'm loving every second of this.

William continued to say that in the past, members of the royal family have always been charitable but not always the most accessible to the public. He said part of the reason for assembling this forum (and one of the main tenets of the foundation) was to show the public that they plan on being transparent with their lives and philanthropic efforts. He said,

The task for us would not be to reinvent the wheel. Instead, our job was to follow the example of those who had come before us, hold on to the values that have always guided our family, but seek to engage in public life in a way that was updated and relevant for our generation. Today we want to celebrate this spirit of togetherness. We want to reflect on what we’ve achieved. And we want you to work with us as we consider what we might do next.

Kate Middleton spoke at the forum, saying that the work they do in the foundation should have "long-lasting resonance" because their roles as royals are a lifetime gig.

The Duchess said, "The work we do can, and should, have a long-lasting resonance. For this reason, we're able to support causes we're passionate about for decades into the future, rather than just a few months or years ... We feel strongly that we have to take a longterm view that is measured in generations." Middleton highlighted the foundation's dedication to fighting the stigma around mental health, and Markle, in her remarks, spoke about supporting women's rights, according to People.

Markle's speech at the Royal Foundation Forum brought up the #MeToo and Time's Up movements.

"I hear a lot of people speaking about girls’ empowerment and women’s empowerment," Markle said. "You will hear people saying they are helping women find their voices. I fundamentally disagree with that because women don’t need to find their voices, they need to be empowered to use it and people need to be urged to listen.” She continued, “Right now with so many campaigns like #MeToo and Time’s Up, there’s no better time to continue to shine a light on women feeling empowered and people supporting them.”

Let's just look at one last picture of the royal core four (I've been calling them that for months... is that weird?) one last time before we continue about our peasant days: