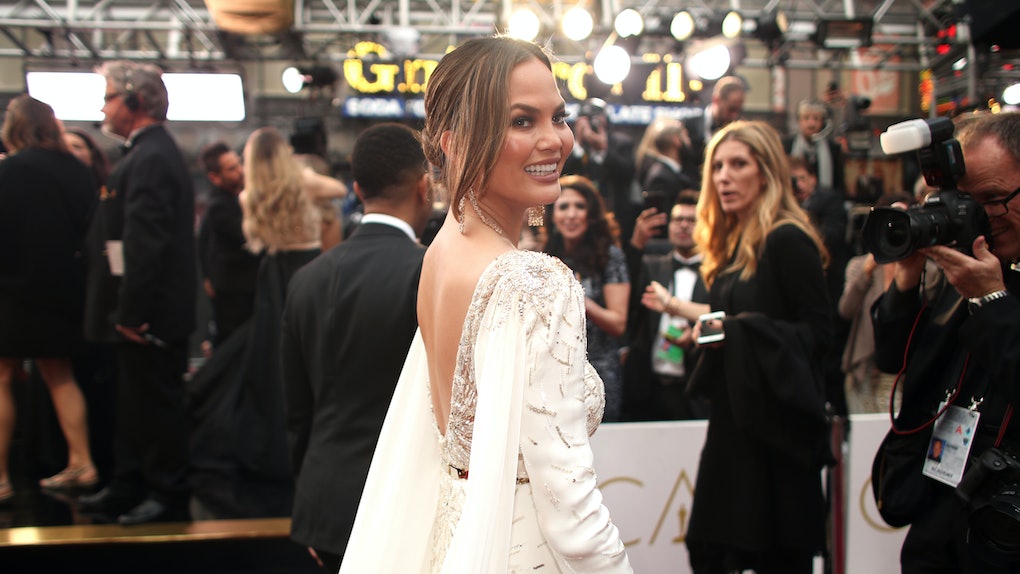 Chrissy Teigen is the queen of the internet today. It seems like the model, who is not partaking in the runway event of the year, the Victoria's Secret Fashion Show, was feeling kinda felt out — because she took to Twitter and hilariously trolled the show by asking people to crop her into a promotional photo that the company posted to Instagram. And Chrissy Teigen Photoshopped into the Victoria's Secret Fashion Show is the best thing we've seen on the internet today.

The model and bestselling author is apparently wishing she was a part of the Angels squad because she decided to troll the fashion show via Snapchat and Twitter. The joke started on Nov. 18 when Chrissy Teigen decided to tell her fans via Snapchat that she's in Shanghai, China, prepping for the main event, which will air on Nov. 28. She told fans that she's closing the show, saying, “going to try to get one last gym session in, gotta look sick! Closing the show!”

Then Teigen took to Twitter, where she reposted a photo that the Victoria's Secret Instagram account published featuring models who are walking this year's runway, asking for someone to photoshop her in.

And the results of Chrissy Teigen fans Photoshopping her into the photo of the runway Angels are priceless:

Those Photoshop jobs are truly hilarious.

But the real MVP award goes to the good souls who Photoshopped Teigen's face over every Victoria's Secret model walking the show:

Teigen was into it.

As were the rest of us, honestly. Chrissy Teigen's Twitter is the gift that keeps on giving.

Unfortunately for her and her fans, Chrissy Teigen has never walked the famed Victoria's Secret Fashion Show runway, although she has worked for the company. According to Nylon, Teigen has previously modeled for the VS website as a "backside model" — meaning she was only contracted by Victoria's Secret to stick her butt out and be photographed at different angles. She said about the horrible experience, "No face involved, just butt. I had to pop my butt out the entire time and I remember that my back was in the most pain of my entire life."

Teigen won't be the only famous face missing from the VS runway.

The joke Teigen makes comes after a slew of reports saying certain Victoria's Secret Angels were denied visas that would allow them to travel to China for the event. The biggest name dropped from the show is supermodel Gigi Hadid, who announced via Twitter that she is no longer able to walk in the show. In the tweet she wrote, "I’m so bummed I won’t be able to make it to China this year. Love my VS family, and will be with all my girls in spirit!!" However, Gigi's sister, Bella Hadid, will be walking for her second consecutive year in a row.

Katy Perry, who was scheduled to be one of the featured musical acts for the fashion show, was also suddenly unable to attend thanks to a 2015 performance in Taiwan. At that performance, Perry wore a unsuspecting sunflower dress. The sunflower is a resistance symbol used by anti-China movements in the Taiwan, and a sticking point between the two countries, which are in a political standoff over whether Taiwan is legally a part of Chinese territory or no, according to The Guardian. She also reportedly waved a Taiwanese flag during her performance, which definitely didn't please Chinese officials. Now, the Chinese government's has denied Perry a visa and entrance into the country based on the incident.

But although we won't have Hadid, Perry, or Teigen for that matter, the show is still sure to be a success as usual. If it were up to me I'd personally fly Teigen into Shanghai to close the show. How amazingly epic would that be?