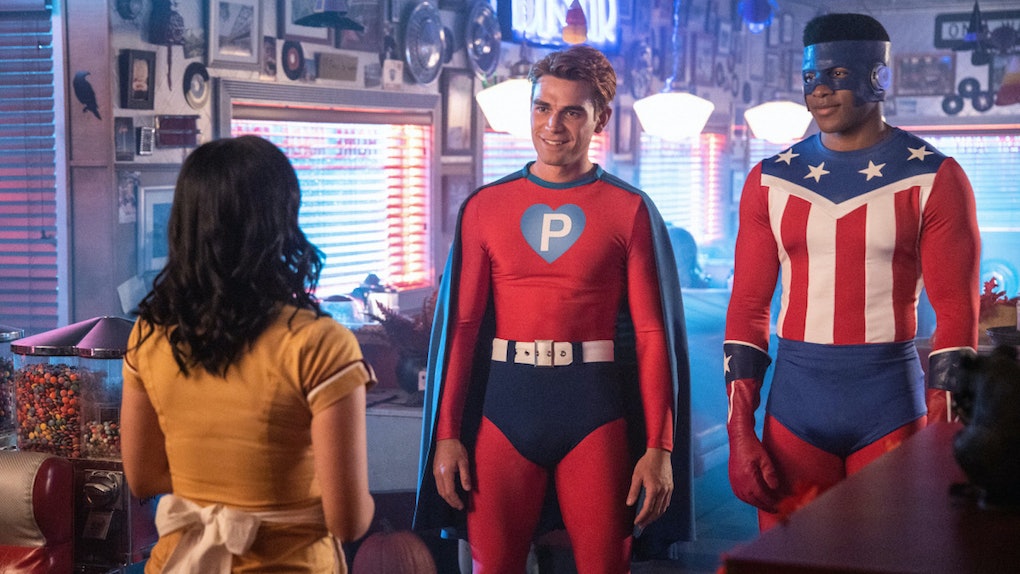 It feels wrong that Riverdale has never done a Halloween episode. The spooky teen drama loves a themed episode, has an affinity for wild costumes, and is all about anything dark and dangerous, so you'd think a Halloween episode would be a Riverdale tradition. But strangely, fans have yet to see Archie and company dress up for the holiday. That will change soon, though, because the show's first Halloween episode is coming up, and first-look photos from Riverdale's Halloween episode reveal some of the gang's comics-inspired costumes.

Since Riverdale itself is a comic-book adaptation and superheroes are totally taking over the movie and TV world right now, it makes sense that the Riverdale residents would celebrate Halloween by dressing up as some iconic superheroes. The CW has officially released a batch of stills from the upcoming Season 4 Episode 4, aptly titled "Halloween," which will air a day ahead of the spooky holiday on Wednesday, Oct. 30. In the new photos, fans can see that Archie and his best bud Mad Dog (who now goes by his real name, Munroe) will pay tribute to Archie Comics history with their costumes, dressing up as superheroes Pureheart the Powerful and The Shield, respectively.

Both of these heroes go back decades in the Archie Comics. In the comics, Pureheart the Powerful is Archie's superhero alter-ego, and The Shield was actually among the first comic-book heroes to don a patriotic costume, predating even Captain America.

Archie and Munroe are not the only ones getting superpowered for Halloween. The new photos also provide a glimpse at Cheryl and Toni's costumes. Cheryl will, of course, dress as one of the most iconic redheads in DC Comics: Poison Ivy. And to complete the couple's costume, Toni's two-toned pigtails reveal she will be Harley Quinn, the iconic baddie so often paired with Poison Ivy in the comics.

Unfortunately, the photos do not reveal any other characters' Halloween costumes, but there is still another unexpected twist: It looks like Jughead may be sharing a room with Moose at his new boarding school, Stonewall Prep. Stills from the episode reveal Moose is now a student at the prep school after leaving Riverdale High last season, and suggest he will be Jughead's new roommate.

These new pics look fun, but the episode description that The CW released alongside them promises the Halloween episode will also deliver some major drama. The synopsis teases mysterious videotapes, a new mystery for Jughead, a confrontation for Archie, and some seriously haunting storylines for Veronica, Betty, and Cheryl:

When ominous videotapes begin appearing on doorsteps across Riverdale, widespread fear quickly returns to the town. At Stonewall Prep, Jughead learns about a series of mysterious disappearances that have occurred to former students at the school. Meanwhile, Archie's plan to create a safe space for the town's kids gets derailed when some unwanted visitors crash their Halloween party. Elsewhere, Veronica comes face to face with trouble, while Betty's past comes back to haunt her. Lastly, a haunting at Thistlehouse rocks Cheryl and Toni to their core.

Oh, and on top of all that, showrunner Roberto Aguirre-Sacasa revealed at Comic-Con that a character will die in the Halloween episode, so get ready to scream. "Halloween" will air at 8 p.m. ET on Wednesday, Oct. 30, on the CW.

More like this
'Grey's Anatomy' Is Officially Renewed For Season 18 & Ellen Pompeo Will Return
By Ani Bundel
This 'Mare Of Easttown' Promo For Season 1, Episode 5 & Beyond Is So Intense
By Ani Bundel
'SNL's "Gen Z Hospital" Sketch Has Twitter Calling Out AAVE Appropriation
By Dylan Kickham
Stay up to date