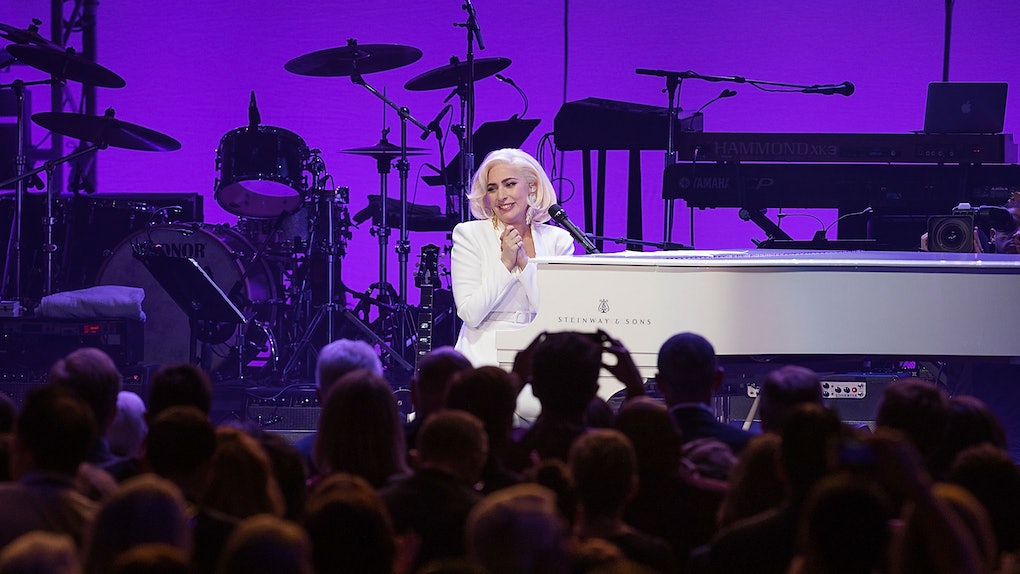 It might seem like Hurricane Harvey hit Texas a while ago, but the relief efforts are still going on. That's why all five living former presidents gathered together for the first time since 2013 to attend the One America Appeal Concert on Oct. 21. The concert was put on to raise money for Hurricane Harvey victims. One little surprise you didn't think you'd get (but now can't live without) is this viral photo of Lady Gaga and the presidents.

According to The Hill, Lady Gaga performed at the concert, and then when she was done singing, she took to Twitter to share the photo of her posing with the five presidents. In the picture, Jimmy Carter, Barack Obama, George H. W. Bush, George W. Bush, and Bill Clinton are all sitting down with Lady Gaga standing behind them. While it is nice to see former presidents of both political parties come together for a good cause, the staging of photo is quite hilarious. I mean, it kinda looks like Lady Gaga is a coach presenting her new presidential basketball team — how fortunate that there are five of them.

Gaga took a more sentimental tone when captioning her photo. She wrote, "Nothing more beautiful than everyone putting their differences aside to help humanity in the face of catastrophe."

Twitter was quick to jump to the possibility of a President Gaga.

Would all Americans then call themselves Little Monsters?

She does have the pantsuit look down pat.

This commenter posited some (possibly inaccurate) historical precedence to make his case.

Though he did provide a video message, according to CNN.

Maybe we are all reading too much into an innocent game of musical chairs.

Those are the rules.

Forget the candid photos, the elder Bush was ready to belt it out alongside the songstress.

It sounds like we missed out on one heck of a would-be duet.

When you get down to it, the photo represents the idea that political disagreements don't mean much when there are people just fighting to survive regain some kind of normalcy in their lives after the devastating affects of Hurricane Harvey.

This picture perfect moment wasn't the only lighthearted happening at the One America Concert on Oct. 21. As Clinton was speaking to the crowd, there was a moment when George W. Bush took time to whisper something to Obama. Presumably, he was cracking some sort of joke because Obama could not hold back a big old smile (although he tried).

Here is Bush trying (and succeeding) to get a chuckle out of Obama.

Unfortunately, the audio doesn't help to decipher what exactly Bush said to get Obama to crack, but the smirk that Bush has after he gets the reaction he wanted indicates that they probably weren't comparing foreign policy plans.

It just goes to show you that even former presidents can't resist a little clowning around, even if they are standing on a stage in front of thousands of people.

I don't know if the speech was given before or after the photo with Lady Gaga was taken, but I'd like to think it was after, and maybe Bush was bragging that Gaga chose to stand by him. Although, Obama really let out a laugh and then desperately tried to reign himself back in, so there's a good chance that Bush's quip was a not-so-innocent in its nature. Either way, it's always refreshing to see people in power act like "normal" people (or class clowns).

Not only did the One America Concert help raise money for the relief efforts to rebuild Texas after Hurricane Harvey, it also gifted us with a one-of-a-kind photo that will be retweeted for years to come. That's what you call a win-win.