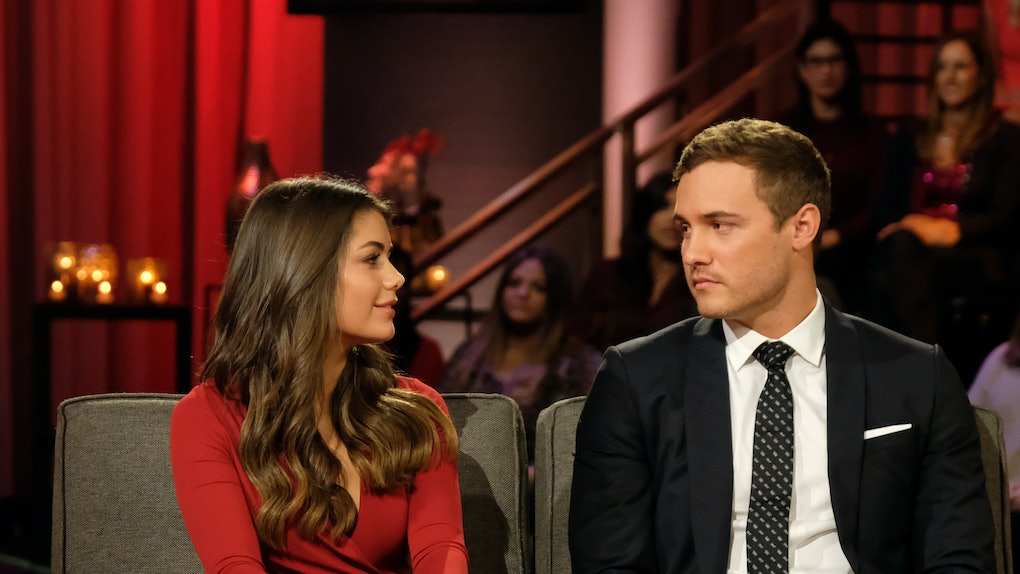 Guys, Chris Harrison wasn't kidding when he said this would be the most dramatic season finale of The Bachelor ever. After Madison Prewett headed home, the pilot popped the question to the only remaining lady, Hannah Ann Sluss, and she accepted. Peter's mom Barb may have been thrilled, but the rest of Bachelor Nation was left feeling... uneasy. It was surprising to exactly no one (expect Mama Barb) when the two broke off the engagement a month later, and TBH, Peter Weber and Hannah Ann Sluss's breakup body language was seriously tense — but not for the reason you'd expect.

Up until the finale, Peter and Hannah Ann's body language had always been intimate. In the Insta Hannah Ann posted following her hometown date, Traci Brown, body language expert and author of Persuasion Point: Body Language and Speech for Influence, previously told Elite Daily that the two appeared super close and comfortable. "He's even trying to look her in the eye," she said. "And at such close range, that's really intimate."

And while breakups usually aren't comfortable, Brown noted that the duo's body language during their split almost looked staged. She spoke to Elite Daily to give her take on why those tense interactions in Part 2 of the finale seemed somewhat unnatural to her.

When Peter first admitted that his heart still belonged to someone else, Hannah Ann appeared more incredulous than upset, as though she and Peter were in a play and he flubbed his lines. "She's not having the reaction we'd expect during a breakup," Brown says. "The look on her face is anger and disbelief... like he's acting out of character." Meanwhile, her reaction to the video during "After the Final Rose" was totally impassive.

It Took Some Time For The News To Sink In.

As it became increasingly clear that Peter's confession was intentional, Hannah Ann seemingly transitioned from angry to distressed. "The upset is becoming more real," Brown says. "She's settling in. Whenever people hold the back of their head like that it shows distress." It was apparent from her downcast eyes that Barb was feeling some major distress as well.

She Still Didn't Seem To Understand What Was Happening.

The sadness was short-lived. Hannah Ann quickly grew irritated with Peter, telling him that he'd taken away her first engagement and asking why he'd gotten on one knee if he wasn't certain. As Brown points out, "People turn their hands up when they have a question, so she may be having real question about what's going on."

She Tried To Remain Strong.

The realest moment of the breakup came when Hannah Ann gave Peter the engagement ring back. Though she attempted to seem "over it," her face said otherwise. "She's trying to smile they the tears here," says Brown. "Believe the eyebrows. She's really upset here."

They Kept Their Distance At The Reunion.

If you'd hoped there might be some lingering feelings that would surface during "After the Final Rose," Hannah Ann's cold body language definitely shut that possibility down. "She's got her legs crossed away from him," Brown says. "There's lots of daylight between them. And she's grabbing her knees, which is another form of protection." She also notes that Peter didn't appear to feel any warmth towards Hannah Ann either, as he similarly kept his hands to himself.

They Seemed Resigned By The End.

Sorry, Hannah Ann fans (and especially Barb). Though their body language seemed like a performance at certain points, that final look these two gave each other made it clear that they are never, ever, ever getting back together.

More like this
Katie Thurston's Ex Joked About Her 'Bachelor' Entrance In His Stand-Up Act
By Corinne Sullivan
Matt James' Quote About His 'Bachelor' Fantasy Suite Dates Is Revealing
By Corinne Sullivan
Are Jennifer Lopez & Ben Affleck Getting Back Together? A Reported Reunion Has Fans Buzzing
By Cianna Garrison
Stay up to date