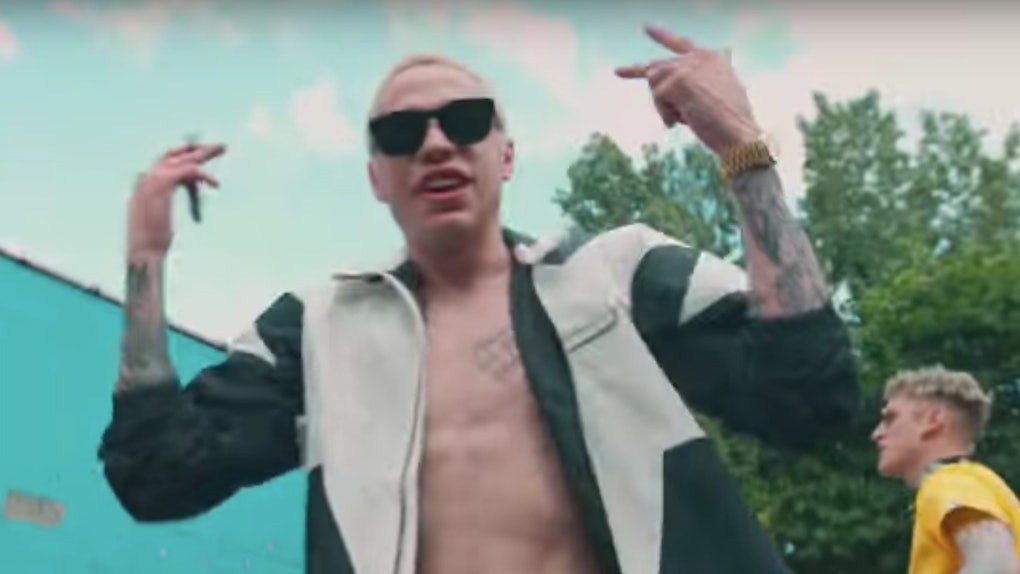 Look, I know that the big ~thing~ that's happening with Pete Davidson right now is obviously his relationship (and quick-as-lightning engagement) with Ariana Grande. But there's some other important stuff going on in his life right now that I think we all need to address, and that's Pete Davidson rapping in Machine Gun Kelly's "LOCO" video. Oh, you didn't know that Pete Davidson made a guest appearance in that video? Believe me when I say that it's less of a cameo and more like he stole the DAMN show, y'all.

The video, which was released on August 2, depicts Machine Gun Kelly (whose real name is Colson Baker) and Pete Davidson looking like two badass dudes rapping on top of cars, eating what appears to be chicken wings (???), and just generally mean muggin' for the cameras. Sure, it seems like your quintessential rap video until you realize that Davidson is the one spitting bars in the beginning and he's not even the rapper.

The video — which is pretty NSFW, by the way, so try not to watch it when your boss is making their rounds — was reportedly shot during the duo's time in Syracuse, New York, where the pair are filming a comedy movie called Big Time Adolescence, and I honestly have to give Pete credit where credit is due.

He literally looks like the star of the video, while MGK is sort of chilling in the background.

Here he is rapping atop a dope-looking car:

And here he is spraying what appears to be beer all over, because why not?:

Then, of course, we see him eating some chicken wings, while MGK takes the lead for a hot minute:

And although one might assume Davidson is licking chicken wing sauce from his fingers in this still, this is actually blood:

And about that little bloody finger incident: "God Is A Woman" singer Ariana Grande was there to nurse Davidson back to health after he sliced his finger during the shooting of the music video.

She took to her Instagram Story to share a black-and-white photo of herself tending to Davidson's wounds, writing, "My baby sliced his finger in Colson’s video, so I fixed it," adding, "Congrats @machinegunkelly we all love u":

Fiancé of the Year Award goes to Ariana Grande, because I know for damn sure that I wouldn't step anywhere near my husband if he was bleeding.

Anyway, you can watch the whole video below, but be prepared for your jaw to drop when you realize that Pete Davidson's rap game is strong:

But let's be real: Davidson is no stranger to music sets. Do you remember Pete Davidson's reaction to Ariana Grande's "God Is A Woman" video?

Grande posted a clip of him watching her shoot her video for the song to Instagram, and it shows that Davidson is basically rendered useless, unable to do anything but keep his eyes on Grande and her performance.

In her caption, she wrote, "Omg now that the songs out i can show u this whole clip ... that face @petedavidson."

You better believe it, Pete. That's your lady! Now it looks like you've both got the ability to show off to each other on a music set, so kudos to you on that one.