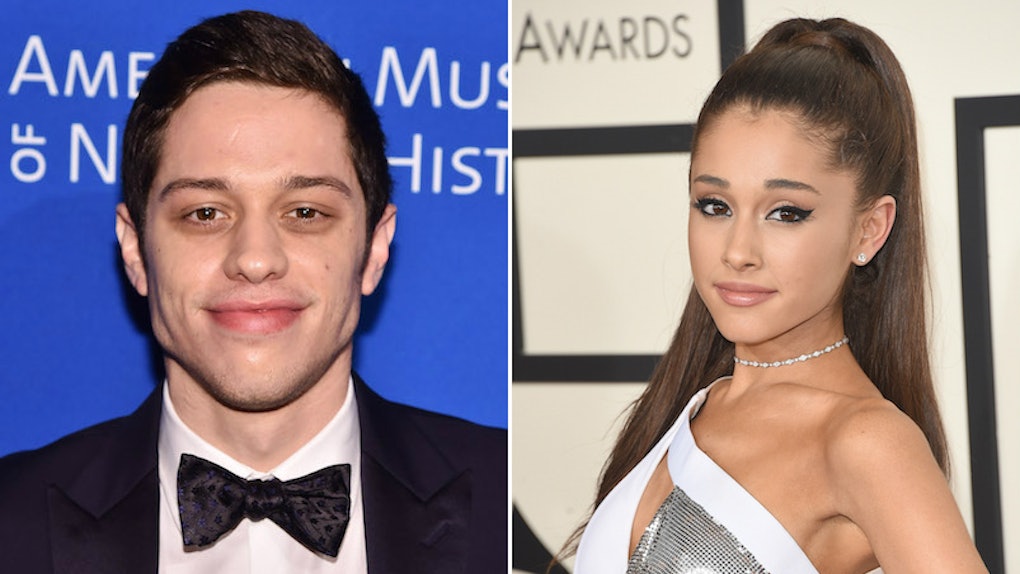 Pete Davidson Canceled His Comedy Show After His Breakup With Ariana Grande, Which Is Sad

It's been a roller coaster ride for anyone who's been keeping up with Ariana Grande and Pete Davidson's relationship. What started as a quickie romance, soaring to seemingly unattainable heights, has now seemingly been put on the back burner. Grande and Davidson have reportedly called it quits on their engagement and relationship, and, while it might have been something we all saw coming from a mile away, I'm still sort of bummed that it ended so very quickly. Elite Daily reached out to both Grande's and Davidson's teams for comment on the reported breakup, but did not hear back by the time of publication. And now, it looks like Pete Davidson canceled his comedy show after his breakup with Ariana Grande, and I'm officially bummed.

Davidson was meant to participate in a comedy show called "Comedy Night Live" taking place at Temple University in Philadelphia on Wednesday, Oct. 17. But sadly, the school announced in a statement on Tuesday, Oct. 16, that Davidson had backed out of the gig. The statement read, "Unfortunately, Pete Davidson will no longer be able to do our homecoming show due to personal reasons," and listed that the show will now be covered by actor and comedian Adam Devine.

While Davidson has decided to cancel his show, it looks like Grande is doing the exact opposite in the wake of their called-off engagement. She'll be appearing in NBC's Wicked special, entitled A Very Wicked Halloween: Celebrating 15 Years on Broadway, which will air on Monday, Oct. 29.

She even took to Instagram just one day after reports of her split with Davidson, posting a photo of her script for the show. She captioned the picture, "honored to be included in this celebration of 15 years of my favorite musical of all time. wouldn’t miss it for the whole universe," which lead many fans to believe she was referencing her breakup with Davidson:

On Oct. 14, TMZ reported that Ariana Grande and Pete Davidson had reportedly officially broken up, and a source close to the former couple told the site that both Grande and Davidson understood that "it simply was not the right time for their relationship to take off," and that "the two still have love for each other, but things are over romantically." Elite Daily reached out to Grande and Davidson's teams for comment on the report, but did not hear back by the time of publication.

In a now-deleted Instagram Story, Grande addressed her split with Davidson on Monday, Oct. 15, writing, "Ok today was v special and i'm so grateful i was able to be there," she said, according to E! News. It seems Grande was referencing her working on NBC's A Very Wicked Halloween alongsideWicked. She continued, writing,

Time to say bye bye to the internet for just a lil bit. it's hard not to bump news n stuff that i'm not tryna to see rn. it's very sad and we're all tryin very hard to keep goin. love u. and thank u for bein here always.

It's obvious to everyone who's ever been in a failed relationship that breakups totally suck, but I hope both Grande and Davidson are able to continue to do their best with their respective work commitments while also trying to find some time to heal. Wishing them both the best.