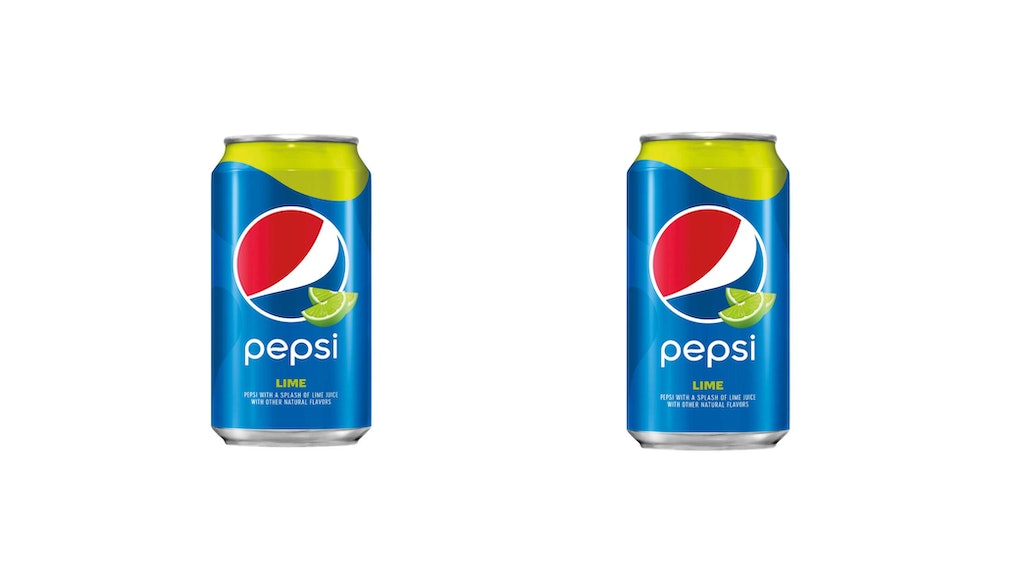 Pepsi's New Fruity Flavors Include Lime For A Summery Twist

There's nothing quite like cracking open a can of cold soda on a warm spring or summer day. It pairs perfectly with anything, it cools you down instantly, and it tastes so good. In order to take your summer festivities to the next level, Pepsi is introducing new flavors that will really make your taste buds tingle and change the way you enjoy the drink. Pepsi's new fruity flavors include Pepsi Lime for a summery, refreshing twist.

Let's be honest, half the time you're looking for a little citrus to toss in your drink, anyway. Well, that's one less thing to look for, because just in time for summer, Pepsi has introduced three new flavors to its soda lineup: Pepsi Lime, Pepsi Berry, and Pepsi Mango, marking the first time Pepsi has added real fruit juice twists to its iconic cola flavor. Until June 14, 2019, the three new flavors will be available in 12-ounce cans in 12 packs at retailers nationwide. After June 14, fans can find the cans in eight packs at Target and Walmart, according to a press release.

So what do the new Pepsi flavors taste like? Pepsi Lime is made with a real splash of lime juice paired with the iconic Pepsi flavor fans know and love, and will likely have a sweet and tart feel to it, sort of like a limeade and cola combo.

You can expect the same formula with the other two flavors. Pepsi Mango and Pepsi Berry are made with mango juice and berry juice, respectively. According to the press release, the flavors will join Pepsi's existing classics like Pepsi Wild Cherry and Pepsi Vanilla, both of which will get brand new can designs to match the rest of the Pepsi fam.

Todd Kaplan, the Vice President of Marketing at Pepsi said in the press release that the new flavors will provide fans with "new cola experience." Kaplan said, "This unique twist on cola creates an unbelievably delightful taste profile that is unparalleled in the marketplace, creating a refreshing way for people to cool off in the warm weather."

Pepsi isn't the only beverage company taking a stab at fun, new flavors. Coca-Cola recently announced an Orange Vanilla flavor that comes in two varieties — original Coke and Coke Zero Sugar — and totally tastes like a carbonated Creamsicle. In January 2019, Coke also introduced two diet flavors to its beverage lineup — Diet Strawberry Guava and Diet Blueberry Acai. The two flavors came with a modernized look featuring a sleeker, thinner can and just a strip of color on a classic chrome background. Strawberry Guava and Blueberry Acai joined Diet Ginger Lime, Diet Feisty Cherry, Diet Twisted Mango, and Diet Zesty Blood Orange in Coke's line of diet sodas. According to a press release at the time, Rafael Acevedo, the group director Diet Coke said infusing flavors into Coca-Cola was an important part of having expanded options for customers. Acevedo said, "Flavor variety is key because it provides more points of entry into the brand. Different consumers have different favorites, so it’s important to offer a range."

Whether you opt for a Pepsi Lime or one of Coca-Cola's new diet flavors, one thing's for certain — it's going to be a fruity summer for sure. Happy sipping!