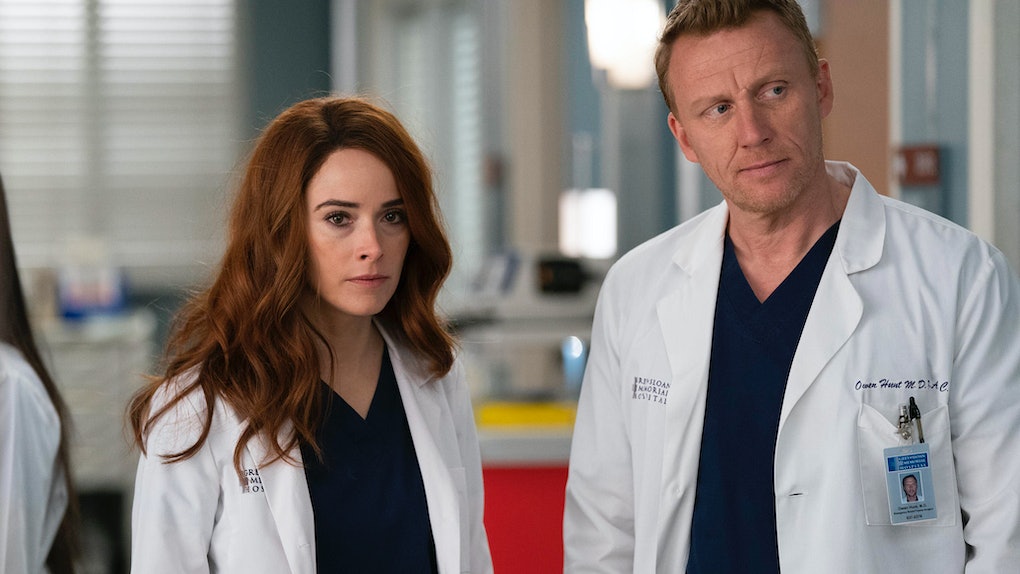 Owen's Sister Megan Is Back On 'Grey's Anatomy,' But It's Not All Good News

Owen Hunt's been through a lot on Grey's Anatomy this past season, and some of his actions have left fans very understandably scratching their heads. After a quick affair with his longtime bestie Teddy Altman, he left her to return to his on-again/off-again wife Amelia Shepherd, all while Teddy was pregnant with his baby. But, with some unresolved jealousy and anger issues, Owen managed to mess up both of those relationships and now he's all alone. If you're wondering how and why Owen managed to mangle his personal life so much, you're not alone. Owen's sister Megan is back on Grey's Anatomy, and she has a lot of opinions about the Owen's been handling things in Seattle.

In the April 4 Grey's Anatomy episode "The Whole Package," Owen's sister Megan (played by Abigail Spencer) returns after last showing up in Season 14. This time around, she's ragging on her brother Owen (played by Kevin McKidd) and calling him out for the wild decisions he's been making after he updates her on his life.

"It's a lot. It's just so much stupidity that my brain is struggling to take it all in. I mean so...much...stupidity!" Megan says to Owen. "You went to Germany for one night, knocked her up, and then screwed it up so badly that you gave her your job instead of a ring? You dum-dum!"

You can watch a clip of Megan below:

With all that Owen's been through this season, it is pretty ludicrous that he hasn't taken a moment to update his sister on some major life events. Not only is Owen expecting a baby with Teddy (played by Kim Raver), but he also just adopted his toddler son Leo. That's a lot for Megan to walk into in her brother's life, so it's pretty understandable why she has such a big reaction to his info dump.

The last time Megan was on Grey's Anatomy, she had reunited with her boyfriend Riggs, and split him up from Meredith in the process. Megan also had adopted her son Farouk, after meeting him when she was overseas with the military. The three of them went to live in Los Angeles together, and so it would be interesting for fans to get a little bit more insight into Megan's new life. Right now, Spencer is only slated to appear in one episode of Grey's Anatomy this season, but hopefully there will be more of Megan down the line. Spencer even posted a photo of her dyed-hair for the role of Megan, and she seemed pretty happy about it. So if Spencer is down to keep her hair red for a little while longer, maybe fans will be getting more of Megan in the future.

While Megan is returning to Grey Sloan Memorial Hospital, Riggs is not with her. It probably would bring up a lot of drama to see Meredith interact with her ex, especially now that she's firmly in a relationship with DeLuca. But, it looks like that's a storyline fans won't be seeing any time soon.

Grey's Anatomy airs on Thursdays at 9PM ET on ABC.