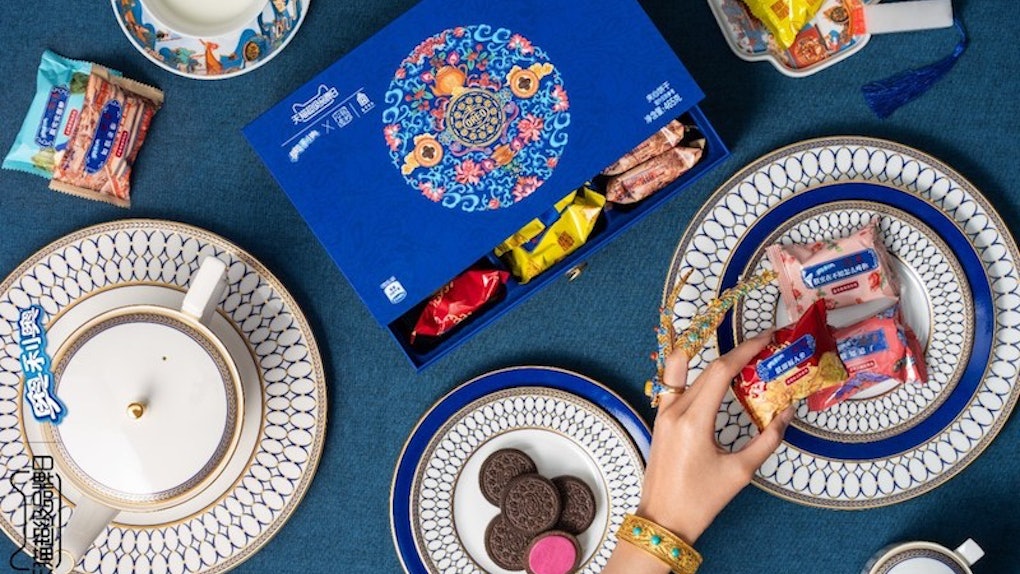 When it comes to out-of-this-world cookie flavors, Oreo takes the cake. In recent years, the company has introduced tons of new varieties that are anything but ordinary, such as Cherry Cola, Piña Colada, and Pistachio. If you think you've tasted the coolest flavors yet, you might want to think again. Believe it or not, Oreo's "Six Flavors" series from China features selections that are unlike any other, including Spicy Pepper Pastry and Lychee-Rose Cake. Unless you live in New York City or visited Alibaba's Tmall Super Brand Day IRL, you probably haven't tasted them yet. If that's the case, I'll give you the deets.

Let's take it from the top. Tmall Super Brand Day is an event ran by Tmall (a Chinese online retailer) in which brands have 24 hours to sell "unique" products on the company's Chinese storefront, according to a Marriott International press release from 2018. Recently, Oreo took part in Tmall Super Brand Day for the fourth consecutive year, offering visitors a taste of the China Six Flavors series.

See what I mean? The new flavors are anything but ordinary, but they sound freaking delicious. Apparently, these Oreo selections are co-branded with the Palace Museum Food Company in China, which explains the product's Chinese packaging (as seen above).

Now that you know about the new Oreo flavors, you might be wondering where you can buy them (I don't blame you). That, my friends, wasn't announced in the company's May 23 press release (sigh). Elite Daily reached out to Oreo to see if its China Six Flavors series will be available in the United States, but did not hear back by the time of publication.

Don't be too bummed, though, because there's still hope. If you live in New York City, there's a *slight* chance that you tried these flavors already. According to Oreo, the new collection was recently taken to The Big Apple. There, a "Moving Forbidden City" Oreo-themed van drove to various landmarks and introduced city dwellers to the new products. It sounds like people enjoyed the unique flavors, so let's hope they hit the U.S. shelves soon.

According to Oreo's press release, one person said, "I expect America to introduce these new flavors to local market" (same).

If you weren't in New York City when the "Moving Forbidden City" van came to town, don't fret. There are tons of other Oreo flavors to enjoy that are readily available, such as Marshmallow Moon and Mint Chocolate Chip Oreo.

While you're snacking on those flavors, cross your fingers that the China Six Flavors series will make its way to the United States. I don't know about you, but I have my eyes on the Spicy Pepper Pastry and the Green Tea Cake. I wonder what they'd taste like dipped in milk.

More like this
What Is Taco Bell's Times Square Digital Cantina? It's A Unique Experience
By Lara Walsh
Smirnoff's Summer Of 2,021 Dreams Giveaway Includes Free Flights & Bucket List Experiences
By Lara Walsh
This Video Tour Of Disney World Reveals Cool Design Secrets Of The Magic Kingdom
By Lara Walsh
Stay up to date