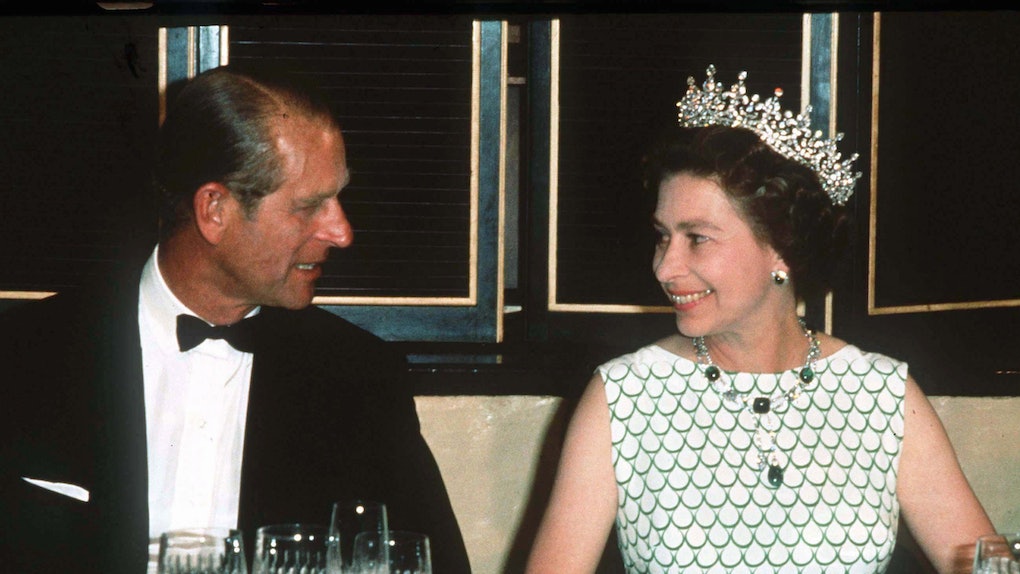 If you were wondering how a royal couple celebrates more than seven decades of matrimonial bliss together, the answer apparently is... 110 miles away from each other. According to Express, Queen Elizabeth and Prince Philip are reportedly spending their 72nd anniversary on Nov. 20, 2019, apart. While Prince Philip is reportedly chilling at Queen Elizabeth's five-bedroom Sandringham estate, Wood Farm, his wife is reportedly busy putting out the PR fire caused by Prince Andrew's Nov. 17 interview with Newsnight. According to Express, she'll reportedly be busy dealing with that mess until the General Election takes place on Dec. 12.

The time apart is reportedly par for the course for the royal couple as of late. “A few weeks ago Philip had a bit of a wobble and hasn’t felt so energetic," a source reportedly told The Sun, adding that "he has been living quietly at Sandringham, where he spends most of his time reading and pottering about." (Is that not the most British-sounding series of quotes you've ever read?) “His mind is as sharp as ever. However the sad reality is that the Queen is more isolated," the source reportedly continued, adding that “they are both making an extraordinary personal sacrifice for the country.”

As a result of his "wobble" and Queen Elizabeth's busy schedule, Express claimed "the Queen and Philip are understood to have seen each other just twice over the past three months." (Elite Daily reached out to reps for the royal family for comment on their anniversary plans and reported time apart, but did not hear back in time for publication.)

Whether or not the couple is celebrating their anniversary together, their grandkids have made a point to give them shoutouts all over Instagram. "Happy anniversary to Her Majesty The Queen and The Duke of Edinburgh! On this day, seventy-two years ago, they were married at Westminster Abbey," Meghan and Harry wrote from the @sussexroyal account. "Many congratulations!"

William and Kate went with a variation of the same message in their caption that wrote: "Wishing Her Majesty The Queen and His Royal Highness The Duke of Edinburgh a very happy 72nd Wedding Anniversary!"

But my favorite social media reaction to Queen Elizabeth and Prince Philip's anniversary has got to be from Netflix, which produces The Crown:

The Crown released its third season on Nov. 17, just three days before Queen Elizabeth, who the show is based on, shared her 72nd anniversary with Prince Philip. Very cute.