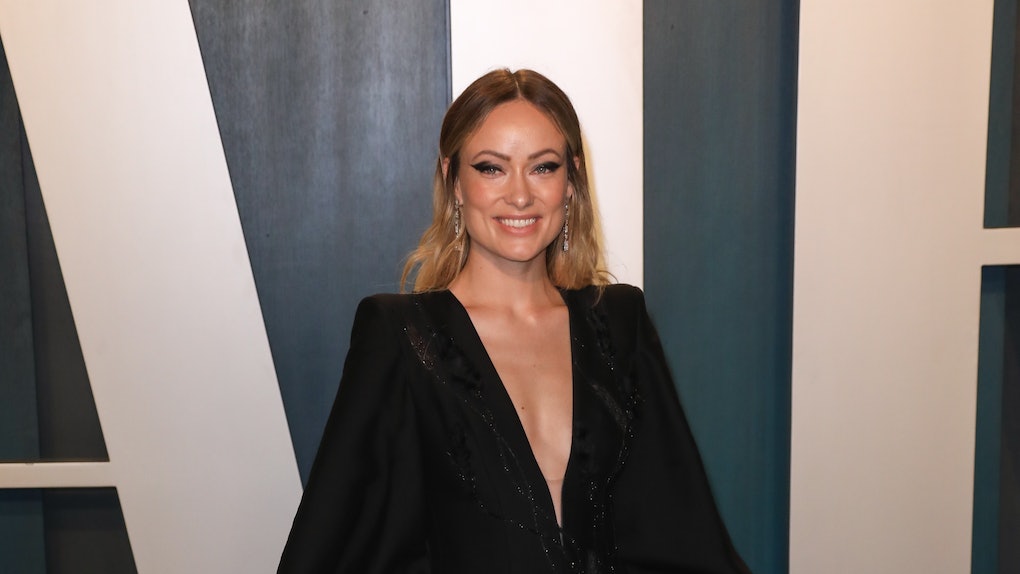 She may not have been there to walk the red carpet with him, but Olivia Wilde's Instagram after Harry Styles' Grammy win made it clear she supports her rumored boyfriend. If you didn't catch the Grammys on March 14, Styles was one of the big stars of the night. He crushed his performance of "Watermelon Sugar," wore three iconic feather boas, and took home the Grammy for Best Pop Solo Performance. Wilde subtly showed her support for Styles that night by posting a picture of Paul McCartney eating a watermelon to her Instagram Story below a praising hands emoji.

Though she didn't mention Styles by name, fans (me, I'm fans) perceived the image as a low-key nod to Styles' song "Watermelon Sugar." Styles and McCartney are both British musical geniuses and the choice of fruit seems too specific to be a coincidence.

So, why wasn't Wilde there to celebrate with Styles in person? According to Page Six, the actress has reportedly been in London quarantining with ex Jason Sudeikis and their two children. Per a source who reportedly spoke to Page Six, Wilde apparently got to London in February and has been spending time with Sudeikis (who's there filming his show Ted Lasso) so that they can “form a bubble to co-parent their kids." Makes sense!

The Page Six source reportedly added, “Jason is still heartbroken over their split, but they are keeping things amicable for their kids. They still care about each other and are friendly, despite her romance with Harry.”

According to Page Six, Styles has also been in London near Wilde up until leaving for Los Angeles last week to be there for the Grammys. "Harry and Olivia have been inseparable," a source told Entertainment Tonight back in February. "Of course that’s in part because they've been in a bubble for their film, but even in the days since it wrapped, they're still spending all their time together."

Rumors of a relationship between Styles and Wilde first started swirling in January, when the pair was spotted attending the wedding of Styles' manager Jeffrey Azoff and Apple Music's Glenne Christiaansen in Montecito, California. At the time, a source reportedly told People that the two "have dated for a few weeks."

Things only seem to have progressed since then! Happy for these two.