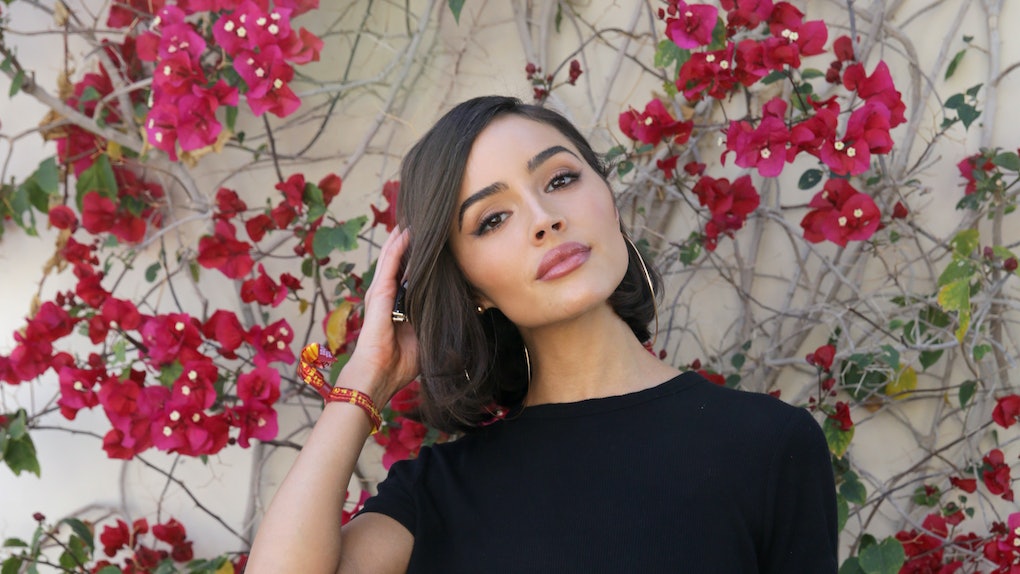 If you like tales of triumph in the face of f*ckboy behavior, Olivia Culpo's response to rumors of Danny Amendola reportedly cheating is one for the ages. Sports Illustrated just dropped its annual, iconic Swimsuit Issue and Culpo has an editorial inside. Obviously, she flexed (who wouldn't?) and shared a few snaps from her photoshoot to Instagram. Yes, Culpo came to slay with beachy looks. But it's her caption — referring heavily to the cheating rumors about Culpo's ex, Amendola, that broke on her way to the SI shoot — that makes her post worth a double tap.

"It’s finally here! This was one of my hardest days for personal reasons (as some of you may remember). I landed in Australia to shoot these photos with some info that rocked my world," Culpo writes. In her post, you can see her semi-nude with a glimmering snake casually wrapped around her torso. You can also see her modeling a mesh one-piece with a killer plunging neckline, and a couple of cute, crocheted two-pieces at golden hour. "Looking back at this first picture, I know exactly what was going through my mind at the time. I was so incredibly thankful for the opportunity to be doing something I had dreamed of, and wished and hoped for since I was a little girl. And I sit here today feeling SO grateful."

If you've been following Culpo for a minute, you might remember her split from NFL football player Danny Amendola back in October 2018. And you might be trying not to remember the long, obnoxious Instagram post Amendola made (and then-deleted) in April dragging Culpo through the mud. Amendola wrote:

I believe there should be a boundary [between] private life and social media. Olivia believes in [sic] fishbowl lifestyle. This fundamental difference was huge in our relationship. If you're my real friend you know I'm private. My mother, brother, father and nephew are closest to me in this world and you don't see one picture of them, and that's for their protection from those who criticize and judge. I believe in nailing pictures frames on the inside of my house to remind the ones I love that I care.

Differences when it comes to social media use? A valid concern in romantic relationships. However, the two broke up in the face of a reported cheating scandal, with Amendola being the one who reportedly cheated. (Earlier, Elite Daily reached out to reps for Amendola and Culpo for comment on his allegations, but did not hear back in time for publication.)

In another snippet of his soliloquy, Amendola said, "Olivia chooses and wants to be noticed on the internet and in Hollywood to make money. Which was hard for me to understand, but quickly had to learn. Whereas, the cost of fame in this world doesn't appeal to me. I play ball for one reason, and that's respect." Yeah, sis, she's a model. That's part of the job. She won Miss Rhode Island, Miss USA, and then Miss Universe in 2012. Culpo, by no means, was keeping her job a secret. And besides, sh*tting on modeling as a career (when your job is also about physical perfection and has made you a celebrity, too)? In 2019? That's sexist and petty, dude. Honestly, good riddance.

Culpo has better things to worry about, like her prestigious modeling gigs — her SI issue features cool top models like Tyra Banks, the first black cover woman ever for the Swimsuit Issue in 1997; Winnie Harlow, who has vitiligo; Veronica Pome'e, a plus-sized model; and Halima, who rocks a hijab.

And yes, Culpo is human and has spoken about heartbreak before. But at the same time, she's never been slow to bounce back or clap back. When news of Priyanka Chopra and Nick Jonas' engagement broke in September 2018 (Culpo split from Jonas in 2015), Culpo threw a little shade in her response, mentioning that love is "difficult" and that "you can see there's a track record of things not working out." She also Instagrammed her slapping on the Rolex she'd bought for Amendola's birthday, post-breakup, saying, "Looks like this is my present now. Happy b-day to me."

I feel like I worked really hard, and hope I can use my experience to inspire people to: 1. Always follow your dreams, 2. Know the power of the law of attraction and manifesting what you want in life, [and] 3. Try your hardest to always give thanks, even when it is difficult and you may not understand why certain things happen when they do. Even though I was struggling on this day, I know in this picture I was thanking God for the opportunities life has given me and for making every day a blessing.

She closed the post by expressing love for her followers and saying thanks for the birthday wishes. Again, Culpo doesn't have time for a man to get her down. She's out here working hard and playing hard. As poet and philosopher Beyoncé Knowles once said, "Always stay gracious: The best revenge is your paper." And Culpo's got it in the bag.

More like this
Is Saweetie's "See Saw" About Quavo? The Lyrics Are Brutal
By Corinne Sullivan
Here's Where Colton Underwood & Cassie Randolph Stand After He Came Out On 'GMA'
By Corinne Sullivan
Matt James & Rachael Kirkconnell Reportedly Aren't Together After Their Rumored Reunion
By Joyann Jeffrey
Stay up to date