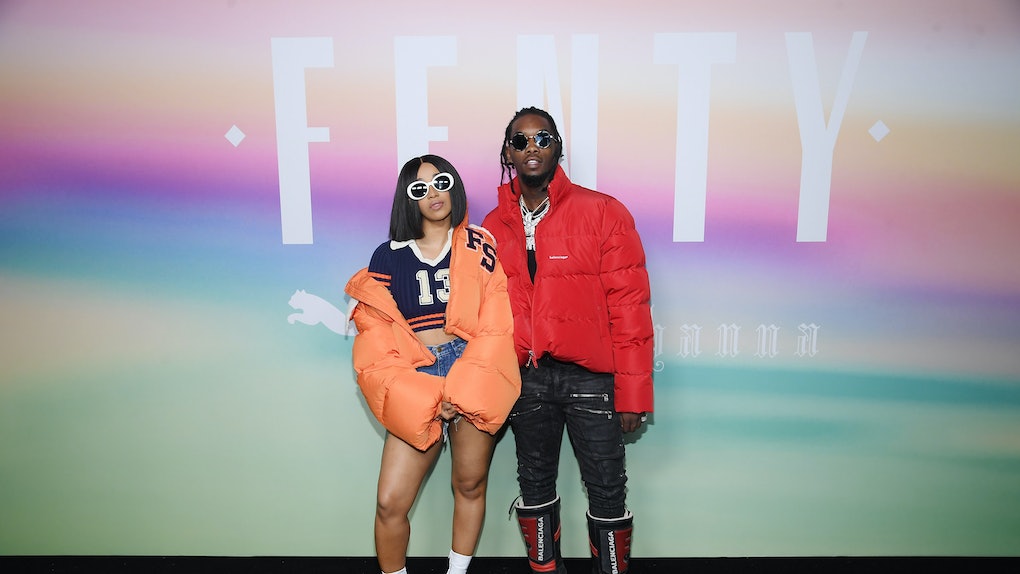 Offset's Reaction To Cardi B's Pregnancy Was So Cute & Supportive, It's Too Much

From the beginning of Cardi B's career, she's been at the forefront of the rap game, and killing it. So it wasn't surprising that she started dating rapper Offset, from Migos, and the charismatic duo quickly became one of hip-hop's most iconic power couples. However, just a few short months ago in the middle of her newfound fame, Cardi found out that she was pregnant, and Offset's reaction to Cardi B's pregnancy was heartwarming AF. Like, seriously. Unplanned pregnancies don't always result in positive reactions from partners, which means Offset gets some serious brownie points for showing Cardi the support that every woman deserves.

However, Cardi and Offset's relationship has been through a few twists and turns before the "Bodak Yellow" rapper confirmed her pregnancy in April by showing off her baby bump on Saturday Night Live. According to Us Weekly, the two rappers made their first public appearance together at Super Bowl LI at Houston's NRG Stadium in February of 2017. Eight months later, Offset publicly proposed to Cardi during a concert that they both performed at in Philadelphia.

The lovebirds seemed to be enjoying the bliss of their engagement when they hit a bump in the road. Just two months after Offset's proposal, several videos were leaked that seemed to depict him in bed with other women on more than one occasion. Yet, despite the infidelity, Cardi stuck by her bae and defended her decision to do so.

“I know I look good, I know I’m rich, I know I’m talented. I know I could get any man I want — any basketball player, football player. But I want to work out my sh*t with my man, and I don’t got to explain why,” she told Cosmopolitan in the April issue. “I’m not your property. This is my life … I’m going to take my time, and I’m going to decide on my decision … It’s not right, what he f*cking did — but people don’t know what I did, ’cause I ain’t no angel.”

It was roughly four months after the cheating scandal that Cardi confirmed the slew of pregnancy rumors. In a new interview with Rolling Stone, Cardi revealed what it was like finding out she was pregnant at the height of her career and breaking the news to Offset.

"He was like, ‘What? Are you sure?'" she told Rolling Stone. "I said, ‘Yeah.' And then he just started smiling really hard."

Considering the pregnancy wasn't planned, and the fact that they were working on strengthening their relationship after everything that went down, just makes me love Offset's reaction even more.

Understandably, his positive reaction didn't keep Cardi from having her own doubts about whether or not the time was right for her to become a mom.

After sharing her doubts with Offset and talking about what she was going to do, he let her know that he was completely in support of her having their baby despite any obstacles.

No meaningful relationship is without its ups and downs. While working through the less-than-ideal circumstances in a relationship can be difficult, one of the most important characteristics of a strong partnership is being there to support each other through tough situations. From the looks of it, Cardi B and Offset have a great relationship going that works for them. Cardi B's exact due date isn't public, but is estimated to be sometime next month. Can't wait!