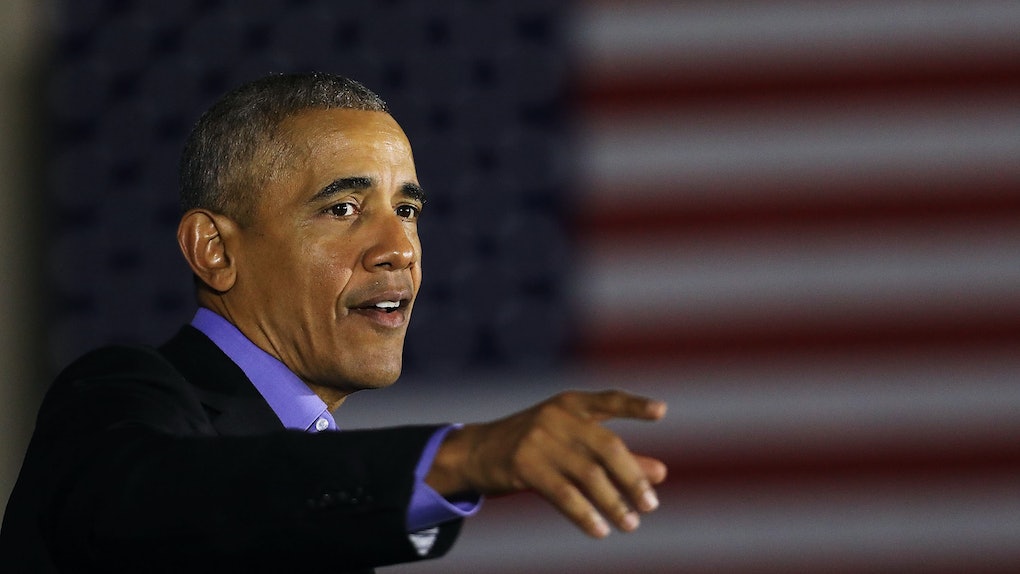 Former President Barack Obama has definitely enjoyed his time off since stepping down from the Oval Office, but that doesn't mean he's left the political world altogether. He's had a handful of appearances and speaking engagements at conferences and universities, most recently to a group of professionals in Paris. And when asked about leadership and the future of the United States, Obama's quote about electing more women to office was seriously on point.

The former commander-in-chief was invited to speak at a Dec. 2 event in Paris organized by a group called "Les Napoleons," according to Mashable. While discussing a multitude of topics, including of course the future of the United States, Obama made a very poignant comment on what needs to change when he stated that he thinks more women should be in the position to make political decisions — "because men seem to be having some problems these days," he said.

"Not to generalize but women seem to have a better capacity [for leadership] than men do, partly because of their socialization," he added.

The critique seemingly comes as a response to the tidal wave of women (and men) coming forward and sharing their experiences of sexual harassment by politicians and other prominent figures. On Nov. 5, The Washington Post published a story in which multiple women alleged that Alabama GOP candidate for U.S. Senate Roy Moore had pursued them sexually when they were in their teens. The youngest girl that accused Moore was just 14 years old at the time of the alleged sexual abuse. Moore has ferociously defended himself and denied these allegations, and has continued to campaign in his state for the coveted Senate seat. Despite the allegations, Trump has decided to endorse Moore, saying that the GOP would need his vote in the Senate.

The GOP isn't the only party that's been hit with allegations of sexual misconduct. On Nov. 16, Senator Al Franken (D-Minn.) was also accused of groping and forcibly kissing a radio host from Los Angeles, Leeann Tweeden, while performing together on a USO Tour in 2009. Franken has made a statement in response, where he apologized for the incident and agreed to fully cooperate with an ethics committee investigation.

This tsunami wave of sexual misconduct allegations has definitely sent shockwaves in practically every sphere of American culture and beyond. And Obama clearly thinks that the solution to solving this particular problem is simple: elect more women, make more women feel powerful in their work environments, make women equals. It's a simple enough strategy.

And honestly, there's simply not enough women in politics at the moment. According to the Center for American Women and Politics (CAWP) at Rutgers University, of the 538 members of Congress, 105 are women, with only 21 in the 100-member U.S. Senate, and 84 out of 435 in the House of Representatives. Only three of the nine sitting Supreme Court members are women. In state legislature there are 1,842 women working and 445 women sitting in State Senate seats. There are also 1,397 women working for their state houses or assemblies (out of 5411 seats), and 20 women are currently serving as mayors out of the country's 100 largest cities.

But it's hopefully not a permanent situation — there's a slew of women who have decided to run for office in response to Trump's presidential victory and the policies his administration is pushing. More than 22,000 women contacted Emily's List, an organization devoted to getting women into public office, to ask about running for office since the 2016 election, according to The New York Times. One woman, Mai-Khanh Tran, decided to enter politics a day after the election. She told the Times she made the decision to run to replace Representative Ed Royce of California when she faced one of her pediatric patients with a brain tumor who had only recently obtained health insurance, presumably knowing that his Obamacare would soon be gone due to Trump's agenda.

So let's get with it, people. If some powerful men have to be taken "dethroned" from their positions of power to pave the way for women, then so be it. God knows that we've suffered long enough.