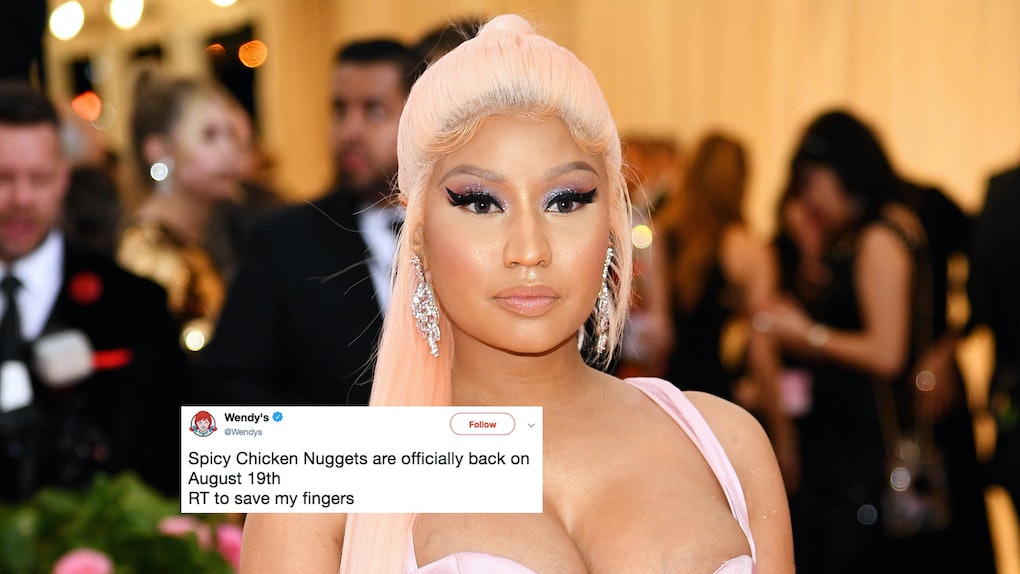 On May 4, 2019, Chance the Rapper tweeted a list of positive affirmations. That list included Wendy's spicy chicken nuggets.

"Positive Affirmations for today," the tweet said. "I WILL have a good day, I Will succeed today, Wendy’s WILL bring back spicy nuggets at some point please please Lord let it be today." Honestly, same.

This made a lot of people on Twitter beg for the scrumptious nuggets back as well, so Wendy's did a poll.

"Y’all keep asking, so here’s your chance," the fast food chain's account tweeted. "The people in charge say if you guys can get our tweet (this one right here) to 2 Million likes, they will bring SPICY CHICKEN NUGGETS BACK. Let’s freakin’ do this!"

It didn't take long for that tweet to get 2 million likes, so Wendy's announced on June 25 that the spicy nuggets were being added back to the menu.

"Spicy Chicken Nuggets are officially back on August 19th RT to save my fingers," the tweet announcement said.

That's when Minaj stepped in.

"Why do y’all keep taking it off the menu in the first place?" Minaj tweeted. "Just leave it. Y’all mad aggy."

Wendy's, ever committed to its Twitter presence, responded saying, “Sorry Queen. When people aren’t buying something they take it away. Hopefully they stay around this time?”

Fans couldn't get enough of this exchange.

"Damn Wendys knows they can't roast the QUEEN," one fan of Minaj tweeted.

"Too much respect to even try," Wendy's tweeted back.

Other fans were just laughing at Minaj's callout.

They also loved Wendy's response to Minaj's tweet, and were even joking that the rapper and fast food chain should collab.

I'd like to issue a formal thank you to Chance the Rapper, whose tweet sparked the movement that brought Wendy's spicy chicken nuggets back.

I would also like to say thank you to Nicki Minaj, who hopefully scared Wendy's into never taking the spicy chicken nuggets off the menu ever again. It's been a dark two years, but I finally see the light.