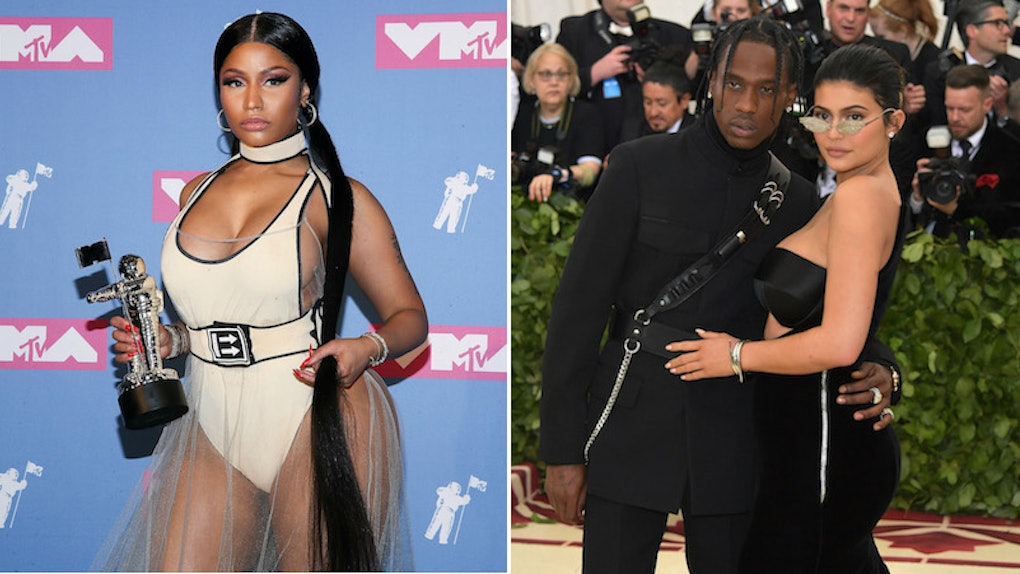 If you don't think that Nicki Minaj's beef with Travis Scott and Kylie Jenner (and, by default, Stormi) is going to make history, you're buggin'. By now, you're probably aware of the fact that Nicki Minaj's Queen album has some competition for the Billboard charts, and Travis Scott's Astroworld is the album that's totally getting in her way. Minaj vented on social media about the entire ordeal, and pinned a ton of the blame on Kylie Jenner and their daughter, Stormi, for seemingly coaxing fans into buying tickets for his tour and increasing his album sales. But if you thought she was done telling the world her thoughts on the matter, you could not be any more incorrect, because Nicki Minaj dragged Travis Scott and Kylie Jenner again — and trust me, you're going to want to hear this rant.

On Aug. 21, Nicki Minaj took to Queen Radio, her show on Apple Music's Beats 1 station, to continue the saga. She blasted Travis Scott, accusing him of essentially manipulating his album sales.

"Travis Scott, on Thursday, when he realized that the Queen was about to have the number one album in America, he and his label decided to have Kylie and baby Stormi put up a tour pass," Minaj said. She continued, saying, "He had her go and post and say, 'Hey, me and Stormi can't wait to see y'all.' How are you selling something that does not have anything to do with your album but it's being counted on Billboard as album sales?"

Minaj didn't stop there, and dragged Scott even more, calling him an "auto-tune man," and revealed that other artists are talking about the ordeal, but are too afraid to say anything. She said:

But what we not gunna do is have this auto-tune man coming up here selling f*cking sweaters and telling y'all he sold half a million albums, because he didn't. And it's a lot of rappers behind the scene that won't talk about it and they're scared. Sweetheart, I'm not scared. I'm legendary in these streets.

Talk about going in, man. Nicki Minaj is giving us all the tea.

The audio excerpt was uploaded to Twitter, which you can listen to (and then play on repeat 100 more times) below:

Many fans took to Twitter to react to Minaj's comments about Scott:

But some were quick to call Minaj out for acting "bitter" about her album sales, and sided with Scott:

All of this comes immediately after Minaj went on a rather epic Twitter rant on Aug. 19, calling out not only Travis Scott but Spotify and rapper Drake as well (but to be fair, Scott gets the brunt of the beef, because he currently holds the number one spot on the album charts for Astroworld).

She expressed her rage that Scott was promoting season pass bundle sales for his tour, and tweeted:

In another tweet that she posted quickly after, she added,

I put my blood sweat & tears in writing a dope album only for Travis Scott to have Kylie Jenner post a tour pass telling ppl to come see her & Stormi. lol. Im actually laughing. #Queen broke the record of being number 1 in 86 countries. Thank Jesus & thank you to my fans.

Just an FYI: she's referencing the fact that Kylie Jenner hinted that she may be touring with Travis Scott on her Instagram, and promoted Scott's merchandise as well. On Thursday, Aug. 16, she posted a picture of Scott's Astroworld Tour poster, writing, "me and storm ready for tour 🎪♥️ shop.travisscott.com":

And, while it seems that Jenner is just doing what she can to support her man, I can understand why Nicki Minaj is not too happy about it.

I'm not going to lie to you — while I hate the idea that two super talented people are feuding with each other, I'm very interested to see how all of this pans out.