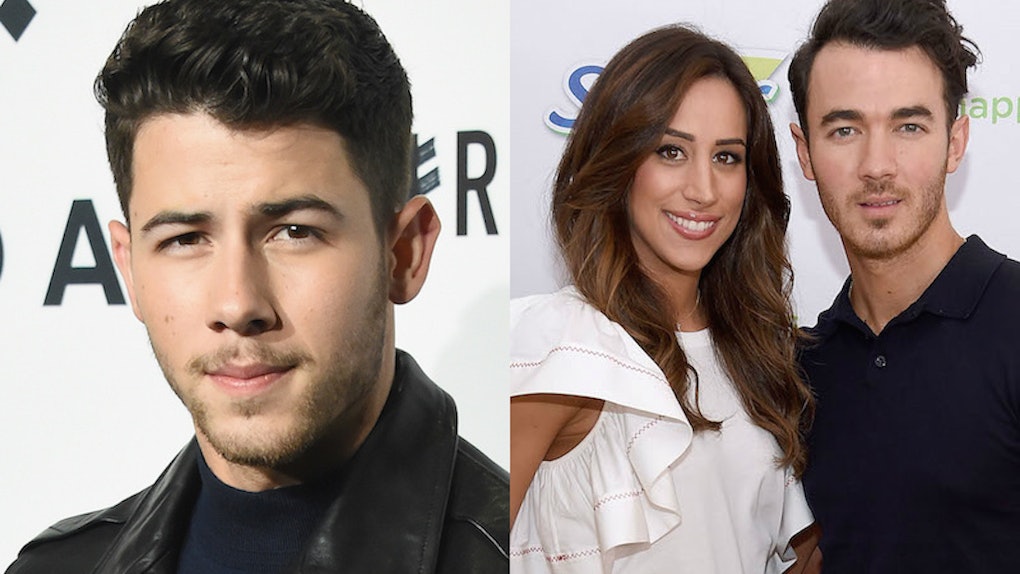 Kevin and Danielle Jonas have been married for almost a decade now, if you can believe it. The couple celebrated their ninth wedding anniversary on Wednesday, Dec. 19, and three of the Jonas Brothers had something cute to say about it on Instagram. While Joe opted to troll Kevin and Danielle a bit, Nick Jonas' anniversary post for Kevin and Danielle was hella sentimental — and no doubt inspired by the fact that he just got married himself (hi, Priyanka!).

Jonas took to the 'gram with a sweet photo of Kevin and Danielle on their wedding day. "Nine years ago today my brother @kevinjonas and his bride @daniellejonas got married," he started off in his caption. Then he broke down the story of how he woke up on their wedding day with the biggest zit on his face and was nervous about how the wedding pictures would turn out (literally me every day... what's up, acne?!).

"Little known fact," he continued, "on the day of their wedding I had an enormous zit in the middle of my forehead. I was 17 and beyond embarrassed, given there were 400+ guests and pictures that the world would see... but the two of them made me feel so much better about it by telling me 'you can’t see it at all' and 'no one will notice.'"

And this is where he got sappy. The rest of his caption read,

Their thoughtfulness on their big day, and throughout their life together is so touching and selfless. My zit faded away after a about a week but their love endures forever. As I enter this new chapter of my life with my beautiful bride I’m so grateful to have a shining example of what a beautiful and healthy marriage should be. Love you both so much (and your sweet daughters). Cheers to a lifetime of joy ahead for you both together always. Happy anniversary.

Awwww! It's so cute when people freak out over just one pimple. If only they knew how good they had it.

OK, now that I'm done with my shade, this is a sweet Instagram. Priyanka Chopra commented on the post saying, "The best," with a bunch of cute emojis. The two are no doubt feeling sappy about Kevin and Danielle's anniversary given that they just got married themselves.

Joe Jonas took more of a trolling route to wish his brother and sister-in-law a happy anniversary.

He posted a picture of Kevin and Danielle posing in front of Cinderella's Castle in Disney World with Cinderella and Prince Charming themselves and wrote, "Happy 9 year Anniversary you 4! Love you all!" Oh, Joe.

By this time next year, all three members of the Jonas Brothers will probably be married. Nick and Priyanka tied the knot in early December 2018, and according to a since-deleted Instagram from Sophie Turner's life coach, it looks like Sophie and Joe's wedding is going down sometime in 2019.

In November, Mike Bayer (life coach ~to the stars~) posted a video of what seemed to be a save the date for the Turner/Jonas wedding.

He has since deleted it, but the video showed a wooden box (likely containing wine or champagne, based on the shape) with an inscription that reads, "Sophie and Joe 2019 France."

The box, while revealing no specific date, does reveal that the wedding (if this is, in fact, their save the date) will go down sometime in 2019 in France. Knowing the Jonas family and their pension for hella grand weddings (Nick and Priyanka got married in a palace, y'all), I have a feeling it's going to be a magical day.

More like this
Lamar Odom's Quotes About The Kardashian Family Curse Do Not Hold Back
By Brandy Robidoux
Has Vanessa Hudgens Met Ashley Tisdale's Daughter, Jupiter? She Revealed The Details
By Michele Mendez
Demi Lovato Said She Won't Share Details About Her Recovery Again After Being Criticized
By Brandy Robidoux
Stay up to date