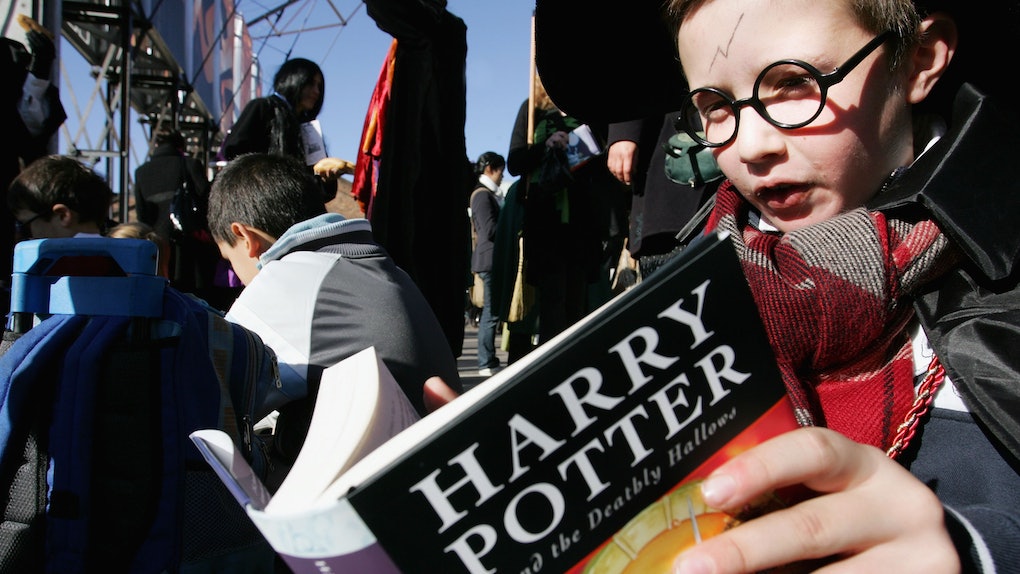 The original U.S. covers of the Harry Potter books are iconic for any American fan, but readers will soon see a special makeover of that classic cover art for a great reason. Commemorating the 20th anniversary of the first book's U.S. release, Scholastic has officially debuted new black-and-white covers illustrated by Brian Selznick that will appear on Harry Potter paperbacks this June. These new Harry Potter 20th anniversary covers are definitely magical, and I might need to clear a spot on my bookshelf for one of these new editions. You can never have enough Harry Potter merchandise, right?

The new cover designs were first confirmed earlier this year, and while individual books with the new covers will hit stores on June 26, 2018, a collectible box set also designed by Selznick will be released in September. Harry Potter and the Sorcerer's Stone debuted in the United States on Sept. 1, 1998, so if you want to console yourself after not receiving a Hogwarts acceptance letter again, picking up that special box set seems like a guarantee.

While each new book design stands on its own, Selznick purposely created a greater image that connected each of the seven illustrations in a horizontally aligned mural. If you're looking to test your memory of the Harry Potter series's plot, a close study of the full mural and the characters that pop up in it is definitely required. I keep discovering new details whenever I zoom in on the full image, so I can only imagine how many Easter eggs are truly scattered throughout the picture. Can you pick out which book correlates to each image?

Selznick, who also wrote and illustrated The Invention of Hugo Cabret and Wonderstruck, shared his excitement about being included in the yearlong anniversary campaign in a statement:

I’m a huge Harry Potter fan (a proud Hufflepuff!) and to be asked to illustrate the 20th anniversary edition covers was an absolute honor. I knew this project came with so much responsibility to the stories, as well as to the readers. I revisited the books and was especially moved by the relationships between the characters in J.K. Rowling’s magical world, so I wanted these covers to reflect that. One of the most challenging and rewarding aspects of the process was drawing seven independent covers that would stand on their own, while making sure that they also lined up to create one single satisfying image. It took dozens and dozens of sketches to get it right, and I am thrilled to share my great love for the books with these new illustrations.

The original illustrations for the American editions of Harry Potter were created by Mary GrandPré. As with Selznick, GrandPré understood the importance of capturing the essence of the enchanting story, telling Scholastic at the time of Order of the Phoenix's 2003 release:

I'd say the best part about working on Harry Potter is being invited to be connected to this really wonderful ongoing story about this amazing character and all the other characters, too. I think that J.K. Rowling is an absolutely gifted writer who makes illustrating her books a fun thing. She's just a joy to illustrate for because her writing is so rich. I'd say that's the best part of working on Harry Potter — that you have so much wonderful stuff to work with.

Scholastic revealed what each individual anniversary book cover will look like on its Twitter account, and compared to the bright, colorful cover images the original editions showed off, these new releases will feature closer, darker pictures of Harry and key elements of that particular book. Hermione and her Time Turner even take center stage on the cover of Prisoner of Azkaban, while Dumbledore has prime positioning for Half-Blood Prince.

Fans seem to love the creative message behind the new covers, but of course, Potterheads are feeling torn between their love for the original covers and the obligation to buy the anniversary editions. Yup, same.

I'm never going to part from my original editions of the Harry Potter books, but I just may have to cave and buy some of these new versions. I guess it's time to buy a whole new bookshelf dedicated to the Boy Wizard.