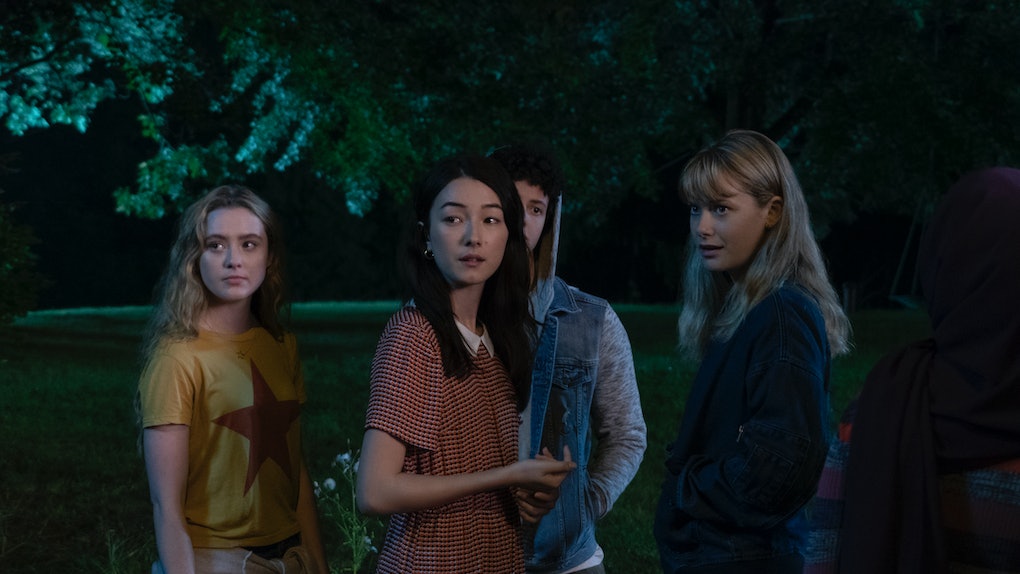 There aren't many books from high school English class that have stood out in vivid detail like Lord of the Flies has. Written by William Golding, the survival tale follows a group of young boys who are stranded on a deserted island without adult supervision. The world they try to create on the island quickly turns chaotic, but Netflix's The Society teaser proves that maintaining peace and structure isn't as easy as it looks. Loosely based on Lord of the Flies, the upcoming Netflix drama puts teenagers in the place of making their own decisions, and the results lean toward being deadly.

In case your school never assigned the 1954 novel Lord of the Flies, its group of adolescent boys experienced its highs and lows while trying to survive on their own. While some characters introduced ways to connect with each other and singled themselves out as leaders, others inspired a less organized spirit among the boys. Their clashes culminate in the ultimate descent into savagery when one of the boys is fatally harmed.

It isn't difficult to understand why the book is required reading for so many teens, but Netflix's upcoming series The Society is really emphasizing the point that people need rules to survive. Starring Kathryn Newton (Big Little Lies), Rachel Keller (Legion), and Kristine Froseth (Sierra Burgess Is a Loser) among others, the show applies Lord of the Flies' survivalist concept to teenagers who are stranded in a strange place resembling their hometown. In a press release, Netflix describes the series with the following:

The Society follows a group of teenagers who are mysteriously transported to a facsimile of their wealthy New England town, left without any trace of their parents. As they struggle to figure out what has happened to them and how to get home, they must establish order and form alliances if they want to survive. The series is a modern take on Lord of the Flies.

The teaser trailer for The Society features Newton's Allie leaving a voicemail message for her mother. As she explains how she and the other teens are alone, shots of the kids' initially joyful debauchery are seen. "Some of us thought it'd be fun to be in charge of ourselves," Allie says on the phone as scenes of teens partying play. "But things got bad."

Just as the boys of Lord of the Flies began to turn on each other, similar havoc hits the kids of The Society. They resort to crime and violence as the mood of their situation shifts, and the footage includes hints that someone even dies as a result of the chaos. "If you hear this," Allie tells her mother on the phone, "please come find us."

Showrunner and executive producer Chris Keyser is clear about the show's parallels to Lord of the Flies, telling Teen Vogue:

If we are left to our own devices, will human beings find a way to co-exist or slide toward chaos?The Society's take on that is to pose the question... to a group of young men and women who are at that exact moment in their lives when they become responsible for their own destinies. It's as if adulthood, with all its risks and opportunities — and in its most extreme form — arrives overnight.

Given that The Society takes place in civilization rather than the wild, the show is also slated to tackle issues that are extremely relatable to most audiences. "The questions aren't what will I eat and how will I find shelter," Keyser told Teen Vogue. "The questions are things like: who makes the rules, how do we keep ourselves safe from each other, how do we protect the weakest among us — who owns the stuff all around us?"

People may not be prone to rereading Lord of the Flies during their free time, but it looks like The Society is the perfect refresher with a dark twist. I'll keep my ears craned for the equivalent of its conch call.

The Society premieres on Friday, May 10, on Netflix.

More like this
22 Romantic 'Shadow & Bone' Book Quotes For Sweet Instagram Pics With Your SO
By Rachel Chapman
These 'The Nevers' Theories About That Flying Ship Are Absolutely Bonkers
By Ani Bundel
Disney+'s 'High School Musical' Series Season 2: Release Date, Trailer, Cast, & More
By Ani Bundel
Stay up to date