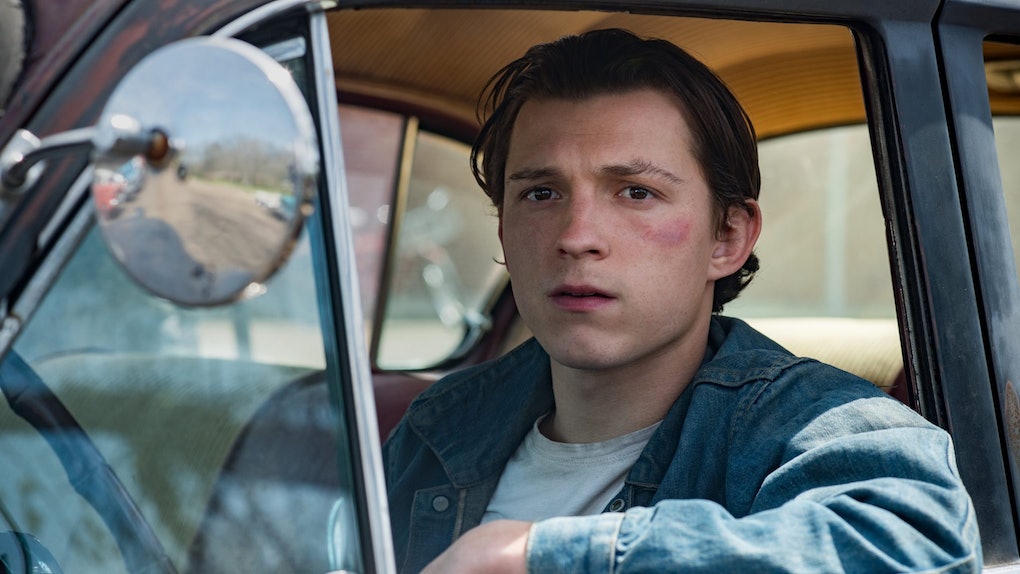 With movies featuring big-screen stars moving to streaming, it would be easy to assume The Devil All The Time was one of them. With an all-star cast lead by Tom Holland and Robert Pattinson, it looks like the kind of film that might have once been a Venice or Toronto International Film Festival entry before making its way to theaters worldwide. But this film was picked up by Netflix back in 2018 and was always meant to be a project for the streamer. Seeing the first images from Netflix's The Devil All The Time proves Netflix made the right call.

The movie is an adaptation of Donald Ray Pollock's 2011 novel. Here's the book's synopsis, according to Deadline:

In a place called Knockemstiff, Ohio, a forgotten backwoods of this country — a storm of faith, violence, and redemption brews. Out of desperation to save his dying wife, our protagonist Willard Russell turns to prayer, which succumbs to sacrifice. His son Arvin is growing from a kid bullied at school into a man who knows when to take action. The cast of characters includes a serial killer couple, a faith-testing preacher, and a corrupt local sheriff in a story told across two decades.

Let's run down the other details of the film:

'The Devil All The Time' Trailer

The Devil All The Time's trailer gives a stark look at the lives of the characters, starting with Tom Holland as Arvin Russell. The trailer opens with him receiving his late father's pistol as a birthday gift, and declaring it the best present he's ever received. But there's more to the story than a dead father's gun from the Vietnam War, as Arvin darkly says later he knows what his daddy did.

Also, can we talk about Robert Pattinson as that no-good preacher? For all that he'll be known as Batt-inson (R.Battz?), he seems determined to continue taking offbeat roles in his other projects as well.

'The Devil All The Time' Cast

The cast is the sort of an all-star affair. It originally had Chris Evans attached to star as the sheriff, but he left due to scheduling conflicts and was replaced by Sebastian Stan.

Without Evans, Tom Holland and Robert Pattinson are now the top-liners as leads Arvin Russell and maybe-shady preacher Russell Teagardin, respectively. They're joined by Jason Clarke and Riley Keough, who play Carl and Sandy Henderson. The movie also has Bill Skarsgård as Arvin’s father, Willard Russell.

'The Devil All The Time' Plot Details

Netflix has kept the details for the film mainly under wraps, but fans are aware The Devil All The Time is based on the 2011 novel of the same name. How much of the story will make it into the film is unknown. Director and co-writer Antonio Campos described it as "a multi-strand narrative set between the end of World War II and the beginning of America’s involvement in Vietnam in which a motley group of characters' lives all intersect."

'The Devil All The Time' Premiere Date

This article was originally published on Aug. 5, 2020